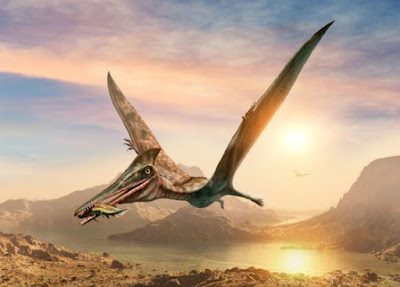 This adds a couple more eyeballs to our list of pterosaur sightings.  .These are notably at night which confirms the nocturnal aspect of their presence.
as i have posted before these creatures hunt underwater for their food were they can easily operate.
The likely reside in caves during the day and simply do not come out, though with our discovery of mind forced invisibility changes that somewhat. i really do not think we have a sky full of these, but can no longer discount it..


“Seriously, I'm never the type to believe anything no matter how good it sounds unless I've experienced it firsthand. Well, during my high school years in deep south Texas in the late 80s, I was sitting outside on my grandmother's picnic table listening to her and her elderly neighbor lady friend at night talk about ghost stories there at the ranch where she lived. Right in front of her property was an old cemetery. I kept laughing at some of their stories and they'd scold me warning me to respect what they deemed to be true. It must have been around 9:00 PM that I heard a strong whiff of large wings flapping from the north heading over us southbound towards the cemetery. It was a full moon and as I looked up, I kid you not, I heard and saw a huge, dark-shaped silhouette of what looked like a pterosaur with the long ball tail fly over us about 50 to 70 feet above us. It measured around 15-20 feet from wing tip to wing tip and around 10-12 feet long from nose to tail. The wing flaps were strong like a "swoosh" every couple of seconds. I saw it fly quickly over the moonlight reflecting over its body above us and just like that it was gone as I heard its wings flap southward over the cemetery until I couldn't hear it anymore. Again, I don't believe things easily but this I saw and heard as my grandmother scolded me saying that the devil was out to get me for not respecting their true ghost stories.” blunthonest1


“I'm looking at this stuff because I saw something a couple of years ago (2016), a pterodactyl is exactly what I saw. It had the tail. I'm in Reading, Pennsylvania and at first I though I saw a Pelican but then I saw the tail and thought what the hell would a Pelican doing way up here in Pennsylvania? This is it, I honestly think these do exist and people are too preoccupied with everything else to take notice. Along with UFO's, I saw a huge football field sized triangular, totally silent craft - no sound whatsoever. This was way back in 1971 and half the city saw it and it was no damned TR3B, which I think the government made up to give an answer to the UFO anomalies. In other words, to shut people up!” Charles Fick  [  way too early for deployment, but maybe not for early development - arclein ]
Posted by arclein at 12:00 AM