Gramsci and the persistence of the Communist MEME. 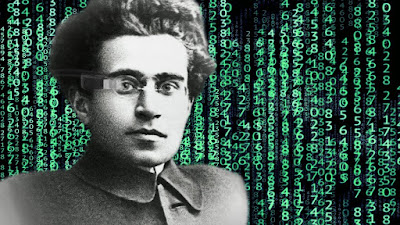 Read this and cringe.  It is now and only now earning its richly deserved blow back.  Essentially in the USA in particular, the academic world of the liberal arts has been hijacked by both secret and overt Marxists who have worked directly to undermine our culture.

I have never strongly said this but this nonsense has to be cleaned out of our whole academic world as rigorously as possible.  It is based on a false narrative that their world view is progressive when it is not.  Yet they are unable to eliminate poverty which alone informs us that they are all wrong headed.

They naturally recruit the under belly of potential  student talent.  Those that can get in but are deeply unprepared for the heavy lifting most academic work demands. Then they are easily recruited into their power dream.  Think Obama in particular who is an excellent example
.

Antonio Gramsci was an Italian communist that was jailed and killed by Mussolini's regime. As an undergraduate Gramsci (pronounced GRAM-she) fascinated me because of his unique take on Marxism which was focused on understanding how communists might conquer the West. At that time, the Bolshevik revolution proved to many like Gramsci that the forces of economic production weren't the only thing that could cause a revolution of the workers. CULTURE had as much to do with it.

In the 20s Lenin challenged theorists to consider how a revolution could be fomented across the West and in other places. More infamous theorists that found "local recipes" for a communist revolution like Mao may have been more "successful" historically, but Gramsci's analysis - focused on the Christian West - simply took a bit longer to see fruition. In fact, Gramsci's analysis became the fountainhead of what we today call "postmodernist" theory.

Gramsci saw Christianity as by far the greatest obstacle to communist revolution in Europe and America. As a good Marxist, Gramsci wasn't an idle theorist by any means, his program was very specific on how a "united communist front" should go down - by having a central political goal, and then challenging, subverting, and replacing all cultural institutions with a new "communist hegemony" as he called it to counter the middle-class capitalist culture and ethical superstructure that held up capitalism.

In conquering the West, his the primary target was the Catholic church and Christianity in general, but all social institutions would have to be infiltrated or built anew to make culture accept a centrally planned communist paradise of the workers. That meant EVERY institution. The family must be destroyed and rebuilt. The arts must be remade. The academy, press, and everything else. Subterfuge was the most effective means according to Gramsci. He called it cultura capillare - or capillary culture. So activists should enter cultural institutions through the capillaries and then move to the very arteries of the body politic to either take it over, or kill off the organ if it threatens the goals of the revolution.

Universities are one of the clearest examples of Gramscism in action here in the United States. Gramsci's views have fully permeated academia and the view that every facet of society must be judged and dealt with against the political goal of a fundamental reorganization of society from the culture up.

In the 1990s as an undergrad, reading Gramsci hit me hard. I recognized his almost ubiquitous influence throughout academia, his copious references in almost everything I read in the social sciences, and the deliberate influence his ideological offspring had in the arts. In a very real sense, reading Gramsci made me choose to create Liberty Maniacs. I was completely convinced, and still am, that culture leads policy, and that confronting authoritarianism through art and culture was my path.

Buttigieg'a candidacy now more than disquiets me. He was reared as a Gramsci communist from the leading Gramsci cheerleader in the world. He went from a mayor of a small town, to basically #3 in Iowa and New Hampshire in the primaries right now. Cultura capillare isn't some idle notion. It's a central aspect of Gramsci's 4 strategies for conquering the West. Gramsci's radicalism is powerful stuff. It's not something that Joseph Buttigieg would devote his life to creating the International Gramsci Society and translating his prison notebooks and not pass down to his only son.