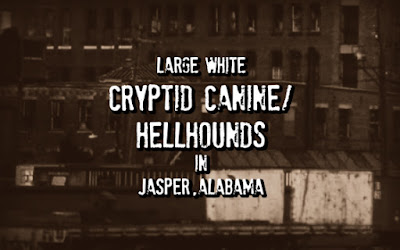 People are now beginning to make reports.  That is excellent news.  It is the giant sloth again.  We confirm that it was able to block viewing by the potential victim until the last moments.  The whole process is excellently described.


We also confirm that we get apparent pack like behavior although this may be more correctly a parent with two youths in tow.  We are normally seeing the males.  The females lack the robust shoulders and look much more like our expected image of a sloth.  In this case the other eyes seen may well have been a couple of females also.

This creature is getting far too comfortable around human habitation.  We will experience losses.

I recently received a telephone call from an eyewitness who, at the time, was living in Jasper, Alabama. I will refer to the witness as 'AL' at this time. I have asked a colleague, who lives near Birmingham, to follow-up with the eyewitness.

AL states that on a summer night about 4 years ago he had walked out onto his front porch during a thunderstorm. As he stood there, he observed a bright light burst in the yard across the street that occurred right after a lightning flash. AL said that everything went dark in the neighborhood, apparently as the result of the lightning. As he observed where the light flash had occurred he noticed a pair of bright red 'eyes.' There seemed to be a dark form with the red eyes, but since it was night it was hard to make out. The house and yard across the street was owned by a relative.

About a minute later there was another lightning flash, when a subsequently burst of light appeared in another area of the yard across the street. Once again, there was another pair of bright red eyes. By this time, the previous red eyes had gotten closer to him and was on the street.

Not long after the second pair of eyes appeared, there was a lightning burst and a third burst of light occurred. Then there was a third pair of bright red eyes. The previous two pair of red eyes had gotten closer to AL, the first almost on his front lawn. He could make out the form of this being. Al said that it looked like a large dark 'Hellhound' with red eyes.

Then suddenly a huge creature appears out of thin air, not far from the first pair of red eyes. Al described it as a 'gorilla-sized beast with long white hair that was on four legs." The head look like that of a wolf. By this time, AL bolted into his house and locked all the doors and grabbed his pistol. Al said that he "scared the life out of his wife and young son" but was unable to tell them what he had witnessed because he was so shocked by it. After several minutes, he peeked out the front door. All of the entities were gone.

The next day, he told his brother about the previous night. His brother lived in the same neighborhood.

About one year later, AL and his wife had separated for a few months. When he moved back into the house, his wife mentioned to him that on the previous night she had heard two dogs barking frantically outside. As she looked out the window, she observed a huge white dog-like creature being chased by the two dogs. She was shocked by the sight, thinking that she must have imagined it.

A few nights ago AL's brother, who still lives in the same neighborhood in Jasper, witnessed that same large white beast. He had also seen something that had a pair of bright red eyes, but was unable to get a description. His brother's sighting prompted AL to contact me.

Like I stated before, I asked a colleague to contact AL in order to follow-up on these sightings and encounters. There have been a higher than average number of canine-like cryptids reported throughout Alabama
Posted by arclein at 12:00 AM