The Worst Invasive Species The U.S. Has Seen in 150 Years 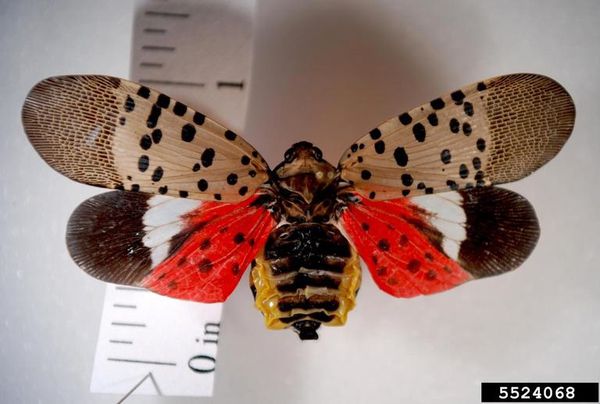 This is terrible news and we can only hope we can counter it.  Folks forget just now many trees were eliminated in the past.  It is also very difficult to stop at all.
Right now we may well be able to weaponize fungi.
I do hope that aggressive grooming can save orchards while susceptible trees in the wold are all knocked out.  That would allow the problem to at least die down and be potentially eliminated.
I grew up with a massive elm that finally succumbed to Dutch elm disease that was surely centuries old.  Fortunately all these target fruit trees are typically short lived. .  .
The Worst Invasive Species The U.S. Has Seen in 150 Years
Published on 27 Apr 2019

The Spotted Lanternfly is considered by the U.S. Department of Agriculture to be the worst invasive species in the last 150 years. That's because they threaten products from wine to apples, lumber and craft beer. Industries that amount to $18 Billion in the state of Pennsylvania, alone. The flies are thought to have arrived from China on a shipment of landscaping stone, join Cheddar as we learn what's being done by the Pennsylvania Department of Agriculture to stop their spread.

Is there a silver bullet for the spotted lanternfly?

This photo shows an adult laternfly, an invasive bug that first appeared in Pennsylvania four years ago. (Photo courtesy of Pennsylvania Department of Agriculture)

Nature appears to be fighting back against a destructive, invasive insect in Pennsylvania, according to new research.

Entomologist Eric Clifton got an email in 2017 from a Penn State Extension representative, saying spotted lanternflies had been found dead and covered in fungus in a park outside Reading.

He and his team found two naturally-occurring fungi — Batkoa major and Beauveria bassiana — are infecting and killing lanternflies.

Clifton, a postdoctoral associate at Cornell University, said the fungi don’t appear to be as damaging to native insects. While collecting samples at Angora Fruit Farm and other locations around Berks County, he didn’t find any other insects killed by Batkoa major. He found just a few that had been infected with Beauveria bassiana.

“There might be a particular strain of this Beauveria fungus that does a very good job of killing these lanternflies, but it’s not killing or causing widespread death of other insects in the area.” Clifton said. “That’s our working hypothesis.”

He said it’s possible native bugs have built up a resistance to the fungi.

“The lanternflies on the other hand, they’ve never, maybe, come across these native strains of Beauveria that have been there in the environment, and so, they may be more sensitive to the fungus and therefore you see this widespread mortality,” Clifton said.

Spores from both fungi infect the flies through their exoskeletons. The spores spread through the lanternfly’s body, killing it.

Since 2014, the lanternfly has expanded its territory from Berks County to 14 Pennsylvania counties. The bugs pose a threat to the state’s $18 billion fruit and timber industries.

Clifton says the findings give some hope to those looking to contain the fly.

“This is no guarantee that it’s going to stop the spread of lanternflies, it’s not going to kill all of them,” he said. “But there is a chance that it would at least help to stabilize population into the future.”

Clifton said he’s planning more research into the effectiveness of existing pesticides that contain the Beauveria fungus. He’ll also look for evidence of this happening outside of Berks County.