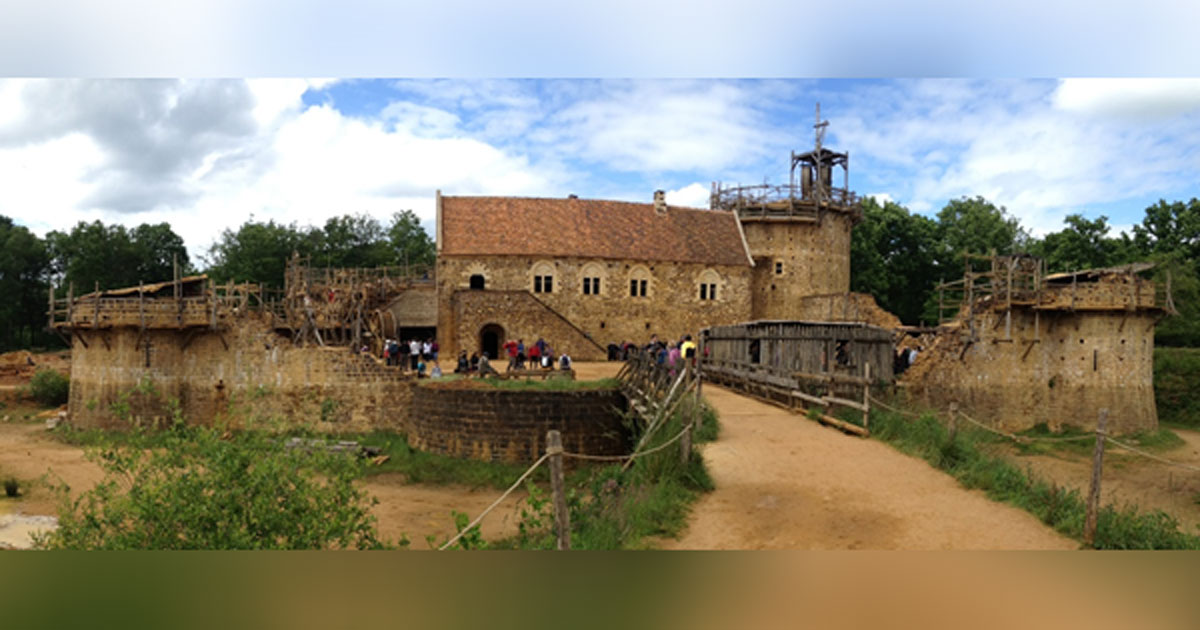 I think that there is a massive demand for Medieval Gothic Cathedrals with a resurgent Christendom firing up.  Some are needed in Europe but a lot will be needed in China and eventually elsewhere.
Modern power tools can sharply improve productivity as well although it is all craftsmanship.  Recall the current high level of wood craftsmanship now available that surpasses the past easily.
Wood framing is also something to address as well. we no longer have the necessary timbers to construct a roof as originally built, and we may well not want to because of real fire risk which has destroyed many Cathedrals. Considering we now live in an age of sculpted glass roofs, we should see if this is a viable prospect.
There is also a slew of ruined Cathedrals out there that may well be recovered.  Glastonbury in particular stands out particularly as it certainly anchored the Atlantic trade route to Georgia and Lewis. As this becomes well known this destination will become important.


The world was shocked by the sight of Notre Dame Cathedral burning . It prompted many people to think about their heritage and reminded them of how we take the great works of the past for granted. The French government is committed to fully restoring the Cathedral and this is going to be a massive undertaking.

Although the skilled artisans for such a project are in short supply, the workers for the restoration could well be found in Guédelon, Burgundy. Here there is a unique scheme, where craft persons are building a 13 th century castle, using medieval tools, designs, and techniques.

The burning of Notre Dame

A massive conflagration engulfed the Cathedral, in central Paris, which is one of the best known and most popular attractions in all France. The fire led to the collapse of the spire and the roof, but the structure of the Cathedral and its bell-towers were saved. Brave firefighters saved the building from total destruction and many volunteers saved precious artworks . 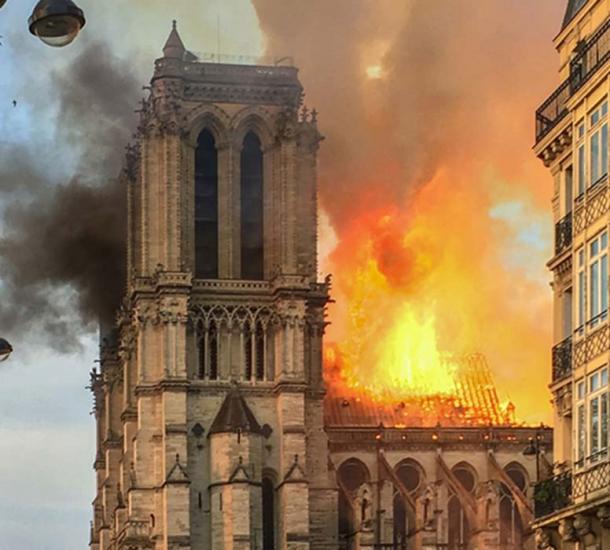 April 2019 a fire broke out at Notre Dame de Paris and much of the building’s roof and spire were destroyed. (Ralf Roletschek / CC BY-SA 4.0 )

According to the BBC, the cause of the fire ‘could be linked to the renovation work that began after cracks appeared in the stone’. The President of France, Emmanuelle Macron, has called the fire a national tragedy and promised that the resources of the state will be used to reconstruct the Cathedral, while over a billion dollars in donations for the reconstruction was quickly pledged by French billionaires and others.


The house of worship is over 800 years old and is dedicated to the Virgin Mary . It is considered to be a masterpiece of French Gothic architecture and has become one of the symbols of the French nation and housed many of the most precious relics of the Catholic Church. 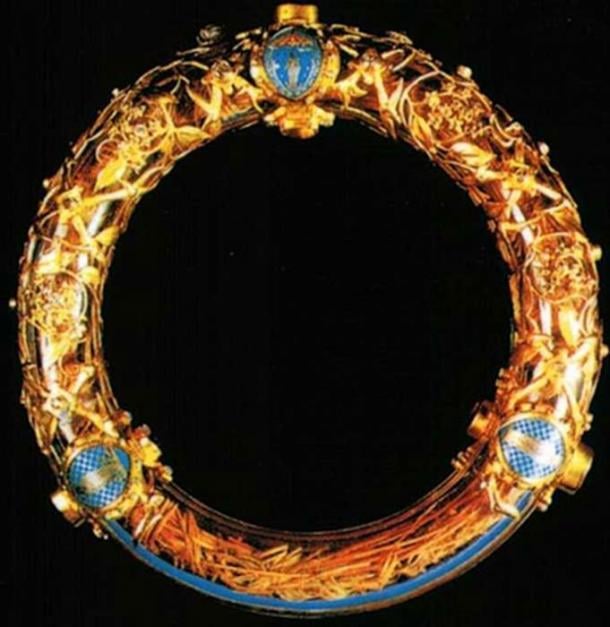 Relic of the crown of thorns, bought by Louis IX from Baldwin II. It was preserved at the Notre Dame de Paris until April 15, 2019, when it was rescued from a fire at the cathedral. (Gavigan / CC BY-SA 3.0 )

The French government is now actively trying to develop a plan to restore Notre Dame, to its former glory. This will require them to find many craft persons with traditional skills. They may be able to source many of these in Burgundy. 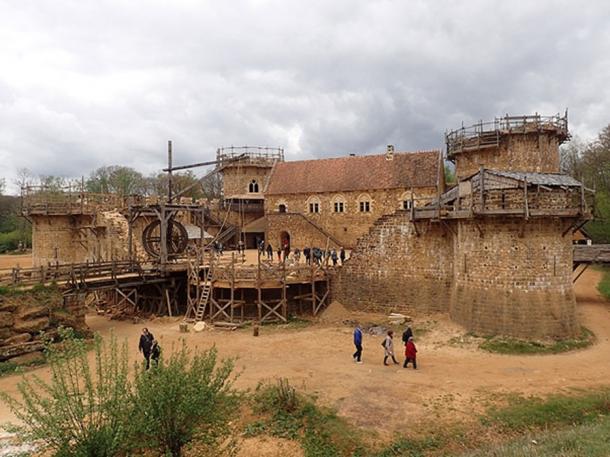 At Guédelon, there is a dedicated team of craft persons and volunteers who are building ‘a 13th-century château using the tools and techniques of the epoch and, as far as possible, locally sourced basic materials’ according to the Guardian. The building is based on a ‘typical French medieval chateau-fort, modeled on designs from the 13th century’ reports The Atlantic . There are a couple of dozen people working at the castle site.


Those who work on the castle are dressed as the 13 th century, artisans. They are even using horses to hauls materials and employ medieval technologies such as a winch drum. Guédelon looks like a construction site from the Middle Ages in almost every way and it has become a tourist attraction .

Many of the workers have abandoned often lucrative professional jobs in order to take part in the project. For example, Baptiste Fabre abandoned a career as a scientist and became a traditional stonemason. The project was started in 1997 by Michel Guyot and Maryline Martin. The aim of the scheme is to help not only to better understand medieval building skills but to preserve the ancient skills and trades. The duo who started the project wanted not only to preserve the ancient skills but to show that manual work had dignity and worth and could enhance the lives of individuals.

The preservation of medieval crafts and trades is critical according to France’s Compagnons du Devoir. This is a guild or organization of craft persons that enrolls thousands of apprentices every year in an effort to maintain the tradition of medieval crafts. Jean-Claude Bellanger, the secretary general of the guild, has stated that France currently ‘lacks 100 stonecutters, 100 masons, 150 carpenters, and at least 200 roofers’’ according to the Guardian. This could mean that hundreds of historic buildings may not be maintained in the near future, which would be a great loss.


The shortage of workers skilled in traditional crafts means that the French government could need the help of those who work on the Guédelon project. They have the skills and the know-how that is needed to restore the Cathedral to its former state. Martin is currently setting-up a training center for young people interested in the traditional crafts and they could help in the Cathedral’s restoration project, in the future. 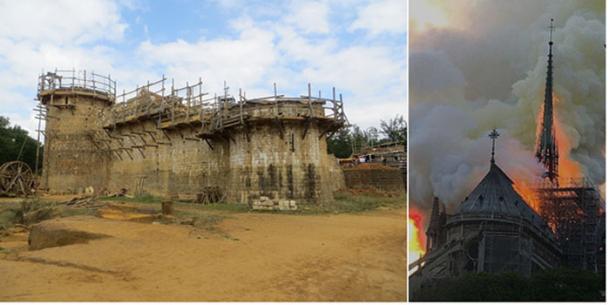 Those who are working at Guédelon are more than willing to help the French government. They believe that they have the capabilities required to ensure that the Cathedral is restored in line with the ‘spirit of the Gothic era’ reports the Guardian. For now, they are continuing to work on the Chateau in Burgundy, and they hope to complete it by 2023.
Posted by arclein at 12:00 AM