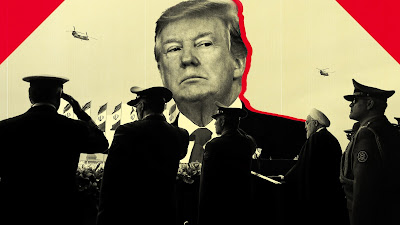 I do suspect that the one constancy in all this is that Trump is drawing down our military exposure globally.  The intent is to eliminate all forms of adventurism by the so called DEEP STATE or more properly the hired lobbyists of the Military Industrial complex.

Getting our military out of Korea is sound and overdue.  It may also allow North Korea to save face and reunite with the south.  This also sets the stage for a complete withdrawal from all of SE Asia.

We are already well on the road from extraction from the whole Middle East as well.  Thus apparent belligerence toward Iran is deliberate bluster to cover something else.  Withdrawing there also sticks the Russians with the task of resolving those issues.

My key point though is that a USA security guarantee has actually postponed a whole range of problems.  This withdrawal forces all interested parties to solve it all themselves.  It also burdens them all with real defense costs as well that may speed the resolution process.  Recall we now live in a world in which the last great empire also chose to withdraw from unnecessary entanglements to great geopolitical effect.

Now please understand something else. The neo cons under Bolton get to run their mouths and little else.  All situations that Trump has touched has ended up in the diplomatic space.  Everything else has been smoke.  Even Venezuela is now engaged in negotiations in Norway. Better yet all the shooting wars are clearly winding down.  It also appears likely that the entire rogue CIA has been captured and is working to dismantle its illegal infrastructure.  Iran is possibly the last component there..
.

I am struggling to understand the Trump administration’s policy toward Iran and hoping that they have failed to tell us something that would make it seem more realistic. Honestly, I would like to see it as rational and potentially effective, given that I spent part of my intelligence career seeking to uncover the malign things Iran was doing. But looking carefully at the White House’s approach so far, I just don’t get it.

Let’s review. In 2015, the Obama administration signed a nuclear reduction deal with Iran. The deal was also signed by Russia, China, Germany, France and a representative of the 28-nation European Union. Iran agreed to reduce its uranium stockpile by 98 percent, enrich it only to peaceful levels (3.67 percent), get rid of three-quarters of its enrichment machines, shut down its plutonium reactor and submit to international inspections. This is to last for at least 10 years, although some compliance monitoring would continue even after that. The United Nations monitoring agency says Iran is complying.

A little over a year ago, President Trump withdrew from the agreement, asserting it was a bad deal, not just on nuclear matters but also because it did not cover other bad behavior by Iran in the region, especially support for terrorism. (Obama said he intended to deal with this separately.) In the meantime, Trump has ordered a U.S. carrier group into the Persian Gulf and gone on heightened alert, saying there is intelligence showing that Iran is encouraging attacks on U.S. armed forces. In response, Iran now hints that it may start loosening some constraints it accepted on nuclear activity.


Why give up the leverage we gained by having essentially all of Europe and two rivals, China and Russia, generally aligned with us when it comes to Iran?

So here’s the first thing I don’t get. Why give up the leverage we gained by having essentially all of Europe and two rivals, China and Russia, generally aligned with us when it comes to Iran? To be sure, you could argue that the nuclear deal is not perfect and that a better one is possible, but now we are stuck trying to do it on our own and using tools — sanctions — that will spark resentment among our former partners in the deal. Sanctions will affect them negatively one way or the other, either by denying them business with Iran or, if they choose to break the sanctions, freezing their banks out of the U.S. financial system. So we are now pretty much on our own.

This might make some sense if the Trump administration had demonstrated a unique ability to cut deals itself. But in the only test case so far, with North Korea, they have made no progress. Pyongyang also has a dangerous nuclear program and a record like Iran’s of carrying out terrorism in its region. So while Trump has taken the wrecking ball to the Iran agreement, his administration has so far given us no template for replacing it with anything better.

Let’s assume what Trump has done so far has nothing to do with replacing the agreement and more with pushing Iran toward regime change. This is something the U.S. has not done well in recent years considering the examples of Iraq and Libya — and Venezuela so far. But for the sake of argument, let’s look at how it could be attempted: There’s really only two ways to get there, one is through war and the other through an internal uprising in Iran.

The war option is fraught with uncertainty and danger. Iran’s military is, of course, not on par with that of the U.S., but it has spent decades thinking about how to use itself asymmetrically against a U.S. force to maximum advantage. We could expect serious naval combat in the Persian Gulf, well-rehearsed efforts to close the strategic Strait of Hormuz, multiple missile attacks on U.S. bases, facilities and allies — and strikes far afield, possibly inside the U.S., by Iranian proxies such as Hezbollah. It would be costly, bloody and hard to end.

I strongly doubt the U.S. military has any desire to add another Middle East war to its mission list at this point. And has anyone reminded Trump that he wants out of the Middle East militarily? This is a point he’s repeatedly made clear in the case of Syria, the place ironically where Iran has most effectively extended its influence. Another wrench in the logic of the administration’s posture.

Regarding the second option, if the past is any guide, the chances of an internal uprising succeeding are very low. There does appear to be substantial discontent with the clerical government, but past periods of protest, such as major demonstrations in 2009, did not succeed for two reasons. First, the government’s security forces are very good at anticipating these and either nipping them in the bud or putting them down once they begin. Second, the opposition consists of many disparate groups that have consistently had trouble uniting or rallying behind a leader.

So if the foregoing estimates are correct, where does that leave us? Bailing out of the nuclear agreement leaves us with no partners eager to join us in pressuring Iran; a military confrontation is possible but with high potential for bogging us down in a mixed conventional/insurgency campaign; the Iranian populace may yearn for change but does not seem equipped to bring it about — and our approach has, if anything, probably strengthened the hard-liners who would oppose this.

Perhaps missing from the public domain is some strategic insight that persuasively argues for Trump’s go-it-alone rhetoric and saber-rattling — rather than gradually applied diplomatic and economic pressure with like-minded partners.

I hope so. Honestly.

Greg Hunter PROVED that the so-called treaty was never signed. Thus, Trump had NO obligation to pursue it.