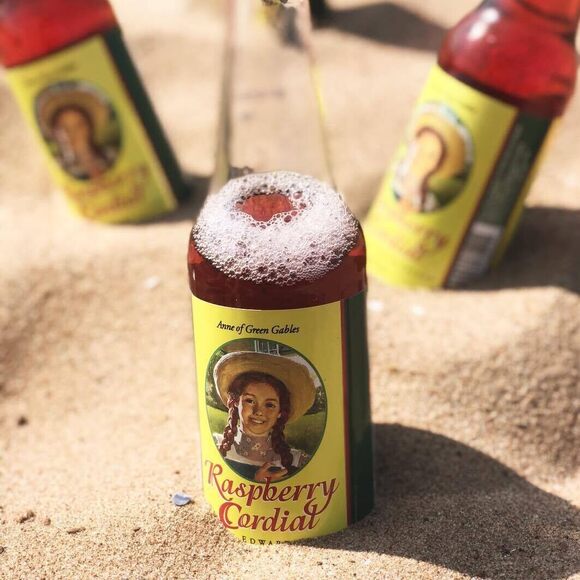 We grew raspberries. Everyday we would well freshly picked fruit directly to our markets.  surplus that could not be sold was first converted to jam and once we had a years supply we then used the balance to produce a mild raspberry vinegar.  wine was to hard to do.

We did it by adding some sugar, likely a couple cups for a gallon or so of berries.  Once boiled, we strained out the juice.  This natural sweetened raspberry juice was then allowed to ferment in the cool cellar forever.  This produces a good vinegar.

We drank this all winter by sharply diluting it in  water.  There was no need this way to add lemon juice and the added sugar allowed fermentation to run to completion.

Immortalized by “Anne of Green Gables,” the drink is a must-try for lit lovers on Prince Edward Island.

Anne of Green Gables, the fictional charming yet spunky orphan whose hijinks on Canada’s Prince Edward Island are the focus of an eponymous series of novels, is a childhood hero for those who grew up on her adventures. But Anne can also, accidentally, be a bad influence. In one chapter of Anne of Green Gables, Anne invites her friend over and serves her a beautiful, deep crimson glass of what appears to be raspberry cordial. This sweet, syrupy drink, made of raspberries, lemon juice, and sugar, reduced in water, is a child-friendly, nonalcoholic beverage. It turns out, however, that little Anne has confused raspberry cordial for currant wine, and her fictional friend—much to the chagrin of her parents—becomes rather tipsy.

Despite the mix-up, Anne of Green Gables helped immortalize the drink. A thick, super-sweet fruit reduction, raspberry cordial is meant to be drunk with seltzer or water, or drizzled over ice cream or fruit. Not to be confused with a more grown-up version, which calls for the raspberries to be soaked in vodka, this syrup is a children’s treat and a grown-up’s glass of nostalgia. While nonalcoholic versions of raspberry cordial are available in some supermarkets (and the liqueur is available in some liquor stores), to drink the official Anne of Green Gables brand cordial, visitors have to sojourn to Prince Edward Island in Canada, the site of Anne’s fictional adventures. There, they can purchase real glass bottles of the sweet, sticky elixir with labels featuring Anne’s telltale red braids.

It’s also simple to make the cordial at home, by mixing raspberries with sugar and lemon juice (and sometimes honey), covering them with boiling water, and letting them steep for several hours. Ambitious home cooks even bottle the beverage like a preserve, so it can be stored in a cool cabinet for months as in the pre-refrigeration days on Anne’s farm. Just don’t confuse the crimson brew for currant wine.

Anne devotees can make a pilgrimage to purchase raspberry cordial on Prince Edward Island, the real home of the fictional Anne. They can also tour the historic Green Gables or—for the die-hard fans—go for the entire Anne of Green Gables vacation package.
Posted by arclein at 12:00 AM