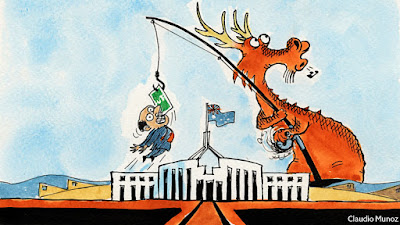 No surprise here but this has been a test of wills actually with the Chinese hoping that they can get Trump to back down. The reality is though that the sooner China bites the bullet and then vigorously complies with legitimate USA demands, the better for China.

Once the full Chinese tariff wall is put in place, all the USA needs to do is encourage strongly the industrialization of the rest of SE Asia and INDIA in order to swiftly regain the advantage of cheap imports for its consumer market while establishing fair trade arrangements with all those countries.

Such a result will stall Chinese growth and force it to properly complete the development of its own consumer market.  More to the point it will force Chinese industry to look inward and create fresh pressure on the political class.  Perhaps they need this pause to allow the rise of massive indigenous competition globally and the establishment of global fair trade..
.

By Emel Akan and Jan Jekielek

Moore, a former White House pick for the Federal Reserve board, accused China of using trade tactics to harm Trump, by pinpointing his core base of support—U.S. farmers and blue-collar workers—in the escalating trade war.

“I don’t think that’s ever really happened before in our history, where a country so brazenly tried to use trade tactics to influence an election,” Moore told The Epoch Times.

“It’s pretty clear they don’t want Donald Trump re-elected,” he said. Trump is “a very hard-line guy with China. They would love to have Joe Biden or Bernie Sanders” in the White House.

Tensions renewed between the United States and China last week after Beijing reneged on commitments it had previously made. The latest round of negotiations ended with no resolution, prompting both sides to slap additional tariffs on each other.

“We’ve had a conversation in this country for two and a half years about Russia meddling in American elections and everybody’s outraged and rightfully so,” Moore said. “What about China? I mean, this is a clear-cut case where they are trying to meddle into our election by using tariffs to go after Trump.”

China’s retaliation so far has been selective and strategic, aiming at U.S. farmers, poultry producers, and certain manufacturers. Beijing’s tariffs particularly hit counties in rural areas in the Midwestern plains and Mountain West states that are Republican-strongholds.

Soybean farmers have been among those hit hardest, as they alone accounted for 10 percent of total U.S. exports to China in 2017. In July 2018, China implemented a 25 percent import tax on soybeans from the United States. Beijing also placed tariffs of 62 percent on U.S. pork in April 2018.

Beijing pretends it can wait Trump out, hurt the U.S. economy and the stock market, and eventually have a “more pacifist Democrat in office” they can deal with, according to Moore.

“One flaw in Trump’s strategy is we just don’t know what their pain threshold is,” Moore said, adding that Chinese people are patient and don’t have democratic elections to overthrow their government.

And this is “one of the things that actually makes me nervous and I think does weaken Trump’s hand a little bit,” he said.

Beijing announced on May 13 that it would impose tariffs on $60 billion worth of U.S. products, as retaliation for a recent U.S. tariff increase on $200 billion of Chinese goods. The new levies that range from 5 to 25 percent mostly target electronic products. Microwaves, printers, and telecommunication equipment are among those with the highest tariff rates.

“I do think China’s playing a dangerous game here. It’s going to hurt both of our countries,” Moore said, adding that consumers would be affected.

“China will be hit three or four times harder than we will, but it’s a mutually assured destruction strategy,” he said. “I do think Trump is using leverage. And I think at the end of the day, I’m actually fairly confident that Trump is going to get a victory here. The question is, how long is this going to take?”

The Trump administration is preparing to impose 25 percent tariffs on the remaining $325 billion in Chinese goods, which will mostly hit consumer goods imports from China. That can add nearly 0.24 percentage point to U.S. core inflation over a year, according to Citi’s estimates.

Can China Use ‘Nuclear Option’?

Some experts believe that China has a so-called “nuclear option” in the trade war, which is the ability to dump its massive holding of U.S. Treasury bonds to trigger a surge in interest rates and cripple the U.S. economy. A Chinese state-run media speculated that Beijing would resort to that financial weapon.

Moore said there was “zero” threat to the U.S. economy from such a Chinese exit.

“That’s the most ridiculous argument,” he said.

“China would only be hurting themselves. They own a trillion dollars of our bonds. All they’re doing is cheapening the bonds that they hold,” he said. “By the way, there’s no shortage in the world of people who want to buy U.S. Treasury bills.”

Moore bets that Washington and Beijing will strike a deal in the next five or six months.

“It’s not going to be a great deal,” he said, but it would be a spark for the U.S. economy and would help Trump declare an election victory.

He advises Trump to use his second term in office “to really hammer them, because this is not going to be over in six months. It’s going to go on for years.”

“This is the epic battle. This is the new Cold War, in my opinion.”
Posted by arclein at 12:00 AM

Far better this "knees and elbows" tug of war over trade that an all-out war. Good chance everyone wins here. I was in China in 2000 and saw how depauperate their general population was in spite of the skyline being filled with construction cranes, cell phones everywhere, and traffic jams in Beijing among 1950's American smog-centric cars. We could not even activate a humanure-to-fertilizer plant in Yantai because all the alkaline materials were being consumed by the construction industry.