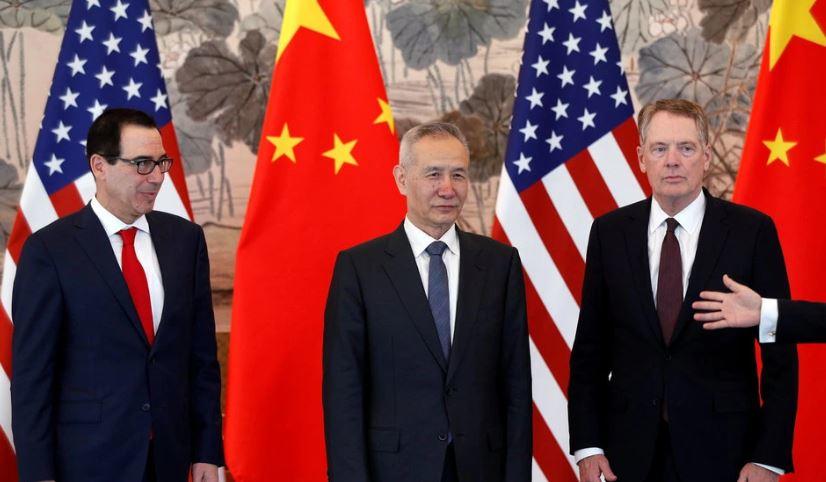 All Trump needs do is to extend unlimited credit to Indian joint ventures to displace Chinese joint ventures. Indian infrastructure has been steadily improving and can support  a sharp expansion.
The Chinese has shown clear bad faith in their dealings and their  approach here is absurd.  The USA can ban all Chinese imports tomorrow morning.  It is not going to happen but the fact remains that the Chinese military has already weaponized trade and has been tolerated until now.
This has served to hugely boost the Chinese economy.  Now it has no choice but to actually liberalize their own economy to expand the internal market.
The USA transitioning to India is .an excellent counter to Chinese behavior for the next decade.  I would identify intellectual property problems and insist that all those go elsewhere.  this allows a steady but rapid transition.
Forcing China to now consolidate will be good news for the global economy.  Way too many bad contracts out there.  Transitioning USA demand to India and afterward to the rest of the third world is also beneficial..
Here's Why The China Trade Deal Fell Apart
by Tyler Durden

Readers who have been paying close attention to every leak related to the ongoing US-China trade talks might remember this FT story from six weeks ago about Beijing's penchant for returning trade-deal draft proposals to Washington riddled with red-line stikeouts.

We only bring it up now because, according to a play-by-play published by Reuters Wednesday morning, it appears President Trump finally lost his patience with Beijing when they returned a draft trade deal with strikeouts eliminating virtually all of the major concessions made during the past few weeks.

Though reports about Beijing's unwillingness to compromise had begun appearing with more regularity during the preceding week, according to Reuters, it appears Beijing was deliberately trying to provoke President Trump. And if this was indeed China's goal, it appears it succeeded.


The diplomatic cable from Beijing arrived in Washington late on Friday night, with systematic edits to a nearly 150-page draft trade agreement that would blow up months of negotiations between the world’s two largest economies, according to three U.S. government sources and three private sector sources briefed on the talks.

The document was riddled with reversals by China that undermined core U.S. demands, the sources told Reuters.

In each of the seven chapters of the draft trade deal, China had deleted its commitments to change laws to resolve core complaints that caused the United States to launch a trade war: theft of U.S. intellectual property and trade secrets; forced technology transfers; competition policy; access to financial services; and currency manipulation.

U.S. President Donald Trump responded in a tweet on Sunday vowing to raise tariffs on $200 billion worth of Chinese goods from 10 to 25 percent on Friday – timed to land in the middle of a scheduled visit by China’s Vice Premier Liu He to Washington to continue trade talks.

One administration insider said the changes "undermines the core architecture of the deal", particularly since Robert Lighthizer has prioritized an enforcement regime that's closer to something typically used for punitive economic sanctions than a trade deal.

Lighthizer and Treasury Secretary Steven Mnuchin said earlier this week that Trump's tariff threats were prompted by Beijing reneging on its promises. But they refused to disclose any details. It now appears that Beijing has gone back on practically all of the concessions it had made during the negotiations, including deals on currency stabilization, enforcement and market access for cloud-computing firms, to name a few.

But despite the steady stream of optimistic trade rhetoric, the only real surprise here - as one administration insider put it - is that it took this long for the White House to blow up the deal.

Lighthizer and U.S. Treasury Secretary Steven Mnuchin were taken aback at the extent of the changes in the draft. The two cabinet officials on Monday told reporters that Chinese backtracking had prompted Trump’s tariff order but did not provide details on the depth and breadth of the revisions.

Liu last week told Lighthizer and Mnuchin that they needed to trust China to fulfil its pledges through administrative and regulatory changes, two of the sources said. Both Mnuchin and Lighthizer considered that unacceptable, given China’s history of failing to fulfil reform pledges.

One private-sector source briefed on the talks said the last round of negotiations had gone very poorly because "China got greedy."

"China reneged on a dozen things, if not more...The talks were so bad that the real surprise is that it took Trump until Sunday to blow up," the source said.

"After 20 years of having their way with the U.S., China still appears to be miscalculating with this administration."

Though Vice Premier Liu He will visit Washington later this week, the notion that a deal can be salvaged, at least in the short term, looks almost impossibly remote. And it's not hard to see why.

Even as the standoff in the Pacific between the US and China has grown increasingly tense - thanks in part to Washington's belligerently pro-Taiwan (and its refusal to allow Beijing to have its cake and eat it, too when it comes to contested islands in the South China Sea) - Beijing has put on a happy face and parroted Washington's line that American military meddling in the region is a separate issue.

But as Washington prepares to sell billions of dollars in arms to Taiwan (only months after President Xi vowed to bring the errant province back under Beijing's control), it appears the Chinese might finally be losing their patience.

On Tuesday, Foreign Ministry spokesman Geng Shuang told reporters that Beijing had lodged "stern representations" with the US over a House bill expressing support for Taiwan. Beijing complained that this "severely violates" the longstanding "One China" policy and represents "gross interference" in China's affairs.

While the Communist Party might have been willing to countenance repeated American intrusions into the South China Sea, Xi earlier this year threatened to smite anybody who dares interfere with Beijing's plans for Taiwan.

Walking away from the trade-deal table might only be the beginning.
Posted by arclein at 12:00 AM