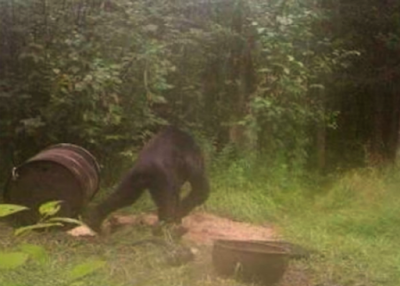 What i have noted is that the Bigfoot is normally not aggressive toward us unless provoked.  Here they go much further to recover the body of a juvenile one of the miners had killed but did not actually kill anyone as we certainly would of.  Their assault on the cabins was heavy though and served to provide cover for the recovery operation.
Way more important is that a group showed up quickly and while the majority of all reports are unique,  this may be biasing us to assume that is all that is present.
The first report again fully confirms the ability of Bigfoot to induce mental blindness to their presence.  We have also seen this with the giant sloth.  This again supports our understanding that large intelligent creatures can block our vision mentally.
They also share knowledge mentally and thus they protect themselves through our ignorance and staying out of our space. .

Lon - here is a bigfoot story I was told by a Navy buddy when we were stationed in Bremerton, WA. He said before going into the service he worked on construction in the Sierra Nevada's of Northern California. They had many 55 gallon drums stored with gas, etc. for the equipment. On returning one morning they found the drums missing and saw large footprints going from where the drums were to the edge of a cliff. They then saw where the drums had been thrown over the cliff and landing below. These drums weighed around 500 hundred pounds and they had been carried not rolled to the edge of the cliff. JK


“I seen a 9 - 10 foot tall gorilla in Northern Michigan in the summer of 2000, when I stopped and turned from the wind to light a cigarette. And there it was, 200 feet away, in broad daylight! Facing me, but looking back in the direction I had just come from. And it did not move a muscle. ( I had the feeling that it did not anticipate me stopping and turning from the wind to light my cigarette? And it only had enough time to turn its head to avert its eyes from me?) Then I heard a stick snap in 2 pieces just behind me. And when I turned and looked to see who was sneaking up on me. There was nothing there. When I turned to get a better look at this gorilla, it was GONE! I ran like a terrified child to the paved road and walked home looking over my shoulder the whole way.” Jay Carlsen 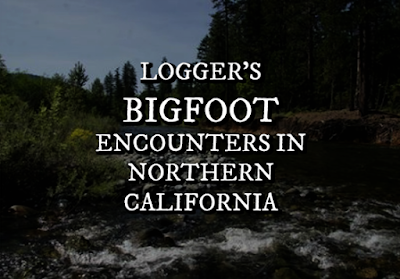 I recently received a telephone call from a logger ('JH') in northern California, who has had encounters with Bigfoot. He also tells me about an earlier incident experienced by a group of miners.


JH states that his father was a miner and was working along Coffee Creek in Trinity County. At the time, JH was 9-years-old. One day while his father worked JH went hunting for rabbits. He was carrying a .22 automatic rifle. As he was walking along the trail, he noticed a tall reddish-brown hair-covered being standing about 200 feet ahead of him. This was his first encounter with a Bigfoot. He hightailed it back to his father, leaving the rifle on the trail. JH states his father didn't say much, but that he did believe what JH told him.


When JH was 21-years-old, he was driving near Big Bend, California at around 10 pm. His truck suddenly broke down, so JH decided to walk home in order to grab some tools he needed to fix the vehicle. As he walked along Big Bend Road, he heard grunts above him on the hillside by a long chain-linked retaining fence (used to stop boulders from falling onto the road). He pointed his flashlight in the direction of the noise and witnessed a 7+ foot dark figure with reddish eyeshine, which he identified as a Bigfoot.


JH pulled out his revolver and let off one shot into the air, hoping to scare the Bigfoot away. Instead, the beast let out a high-pitched continuous scream while grabbing and violently shaking the retaining fence. JH said that the fence literally shook along its length of about 500 feet! JH once again fired in the direction of the Bigfoot hoping it would leave, which it finally did.


JH said that his father told him an earlier account several years later. He had been working with a crew of miners along Coffee Creek. They had built a camp with several cabins where they would sleep at night. One day, while they were working, a juvenile Bigfoot had gotten close to the camp. A miner was scared by the young Bigfoot and killed it with his rifle. The body was kept in a vacant cabin. They planned to take it back home with them the following day.


That night, the camp was literally attacked by a group of Bigfoot. Rocks and tree limbs rained down onto the cabins, and breached several of the dwellings. JH said that his father believed that the group numbered 7-8 Bigfoot and that the attack lasted about 15 minutes. None of the miners were killed, but a few sustained significant injuries. During the attack, the dead juvenile Bigfoot was taken.


JH states that every logger he works with is aware of the Bigfoot. Each carries a weapon in case there is a need to protect themselves. JH doesn't condone killing Bigfoot, but he acknowledges that they do exist and that there have been instances of aggression.
Posted by arclein at 12:00 AM