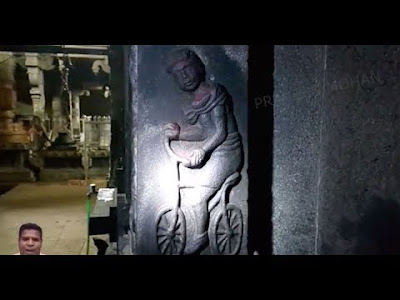 This video discusses this particular carving that plausibly predates the European invention.  That the bicycle was invented in the past is completely reasonable.  Certainly we do not see actual pedals and chains.   A two wheel bicycle simply kicked along would still be useful and at least a toy for a court.

What happened in Europe is that we developed mass production of steel to make these machines and that led quickly to the chain and cog system.  Recall the large wheel allowed effective kicking to get started

Doing the same using iron or even bronze was way too expensive or simply unsuitable.

The idea was surely always there but simply impossible to exploit until the late nineteenth century. .

Snopes is for dopes...