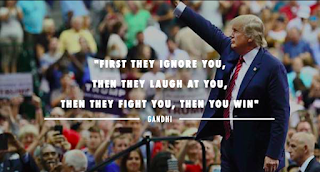 This is close to the truth as well. Trump does have an agenda that will actually take many years to properly roll out and to properly protect.  He will have six more years and his successor will have the task of protecting it all for eight more.

Right now we are in the end game of asserting real control over the Federal government.  This will allow him to eliminate and to completely reform all agencies over the next two years.  Central will be  an eminent RIF which is now possible.

We already know that the DEEP STATE  is in real trouble and we will see the unimaginable reality of the swamp actually been drained in real time.  Plenty has already happened behind full secrecy.

The DEMS are also in deep trouble.  We expect around 100 to be removed forcing a special election.

There is also a curious narrative out there that Pelosi was complicit in an intercepted Assassination attempt against both Trump and Pence this past weekend.  It certainly shows how desperate the rumor mill has become.
.

https://www.americanthinker.com/blog/2019/01/trump_hailed_as_new_gandhi_watch_leftist_heads_explode.html
As the showdown over the border wall and the government shutdown bores through, American Spectator writer Jeffrey Lord has recognized something interesting about President Trump's unwavering stance:

That should set a few lefties' hair on fire.  After all, isn't Mohandas Gandhi, whose nonviolent resistance won India its independence, the left's favorite peacenik?  Didn't Hollywood's lefties hand the Gandhi movie an Academy Award?

They'll go nuts at this New Gandhi paradigm, but Lord's argument is good for understanding Trump and why he's likely to win his border wall battle, even with a leftist House to work with.

The secret, Lord says, is that Trump has Gandhi's intense and singular focus in an against-all-odds environment.  He writes:


Trump, like Gandhi, knows exactly what he is after: the wall and border security.  And the Trump version of Gandhi's "non-cooperation" is…shutting down the government.  Like Gandhi, he refuses to budge.  And as with the British Viceroy and other Brits involved in running India, Nancy Pelosi and Chuck Schumer simply don't get it.


There is nothing more amusing at this point then [sic] watching Nancy and Chuck fume and stammer in self-righteous indignation as they defend a system that is killing all manner of American kids with drugs, not to mention, as with the murder of California's police officer Ronil Singh, producing illegals and gang members bent on murdering Americans.

Lord goes on to compare that steadfastness to President Ronald Reagan's unwavering stance on the U.S. air traffic controllers and their illegal strike, something that caught the Kremlin's eye and forced the old gray men on the top of Lenin's tomb to adjust their expectations accordingly.

But he need not have gone that far back to prove the merits of his argument.  Trump himself has shown the steel mettle not to back down in at least two noteworthy instances two years into his presidency: in the spectacular tax cut won in Congress that set the stage for the current economic takeoff, and his absolute and utter refusal to back down on the Supreme Court nomination of Brett Kavanaugh, which had been subject to the Democrats' foulest and dirtiest tricks.

One might argue that that same resolve and focus were there in President Obama, with his 2010 passage of the always unpopular Obamacare, which passage, coincidence of coincidences, was engineered by Nancy Pelosi.  She's got lots of focus and resolve, too.  But she has a lot less power than Trump does.  I'm not just talking about her diluted office of House speaker in comparison to the president's.  She's less spry than she used to be, she burbles mistakes, and she's got an extremely fractious Democratic base to work with at this point, with many newly elected centrist Democrats expressing doubts about her bid to enforce intransigence on the wall in the wake of the government shutdown, while the crazy wing of her party, led by people such as Alexandria Ocasio-Cortez, continues to undercut her.  She's also under more pressure than Trump is to get the government re-opened, given that virtually all of the workers who won't be getting paychecks Friday are Democrats who already hated Trump before the shutdown.  Pelosi owes them far more than Trump owes them, and if anything, the shutdown demonstrates for him how useless they are given that most of the government is still operating rather smoothly.  That leaves Pelosi to take the heat as she works to get these sinecures paid.

Gandhi, indeed.  It sounds as though Trump is going to win, and that's some impressive nonviolent resistance he's using – to the most horrid swamp any new president has ever encountered.

Take a look at this interview. Excellent explanation of what's really going on behind the scenes.