Population potential of the Salish Sea. 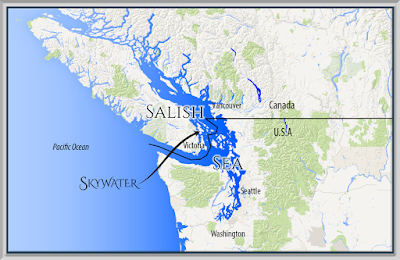 With this post i am revisiting the concept of sea habitats in particular.  The operating protocol will be a barge that is one kilometer large and half a kilometer wide.  Such can be built on Roberts Bank on the mudflats of the Fraser River just south of Vancouver behind some form of coffer dams and a floating gate that can be removed for launch.  The initial build can be a concrete shell with all the necessary hard points and structural elements used to manage warping and any other potential failure modes.  The initial draft should be shallow.

The sides can then be built up in the from of condo towers from preset hard points able to manage the added weight.  nine towers per 100x100 meters allows us 180 potential builds using both sides of the barge.  It also leaves an additional 300x1000 square meters for roads and surface facilities.   The whole structure itself can also have several floors within the hull providing an additional several square kilometers of build-able space.

What makes the Salish Sea so attractive is that it is naturally immune to Tsunamis and even significant sea conditions.  This makes it the best possible place to pioneer such technology.

There are plenty of engineering issues to address of course but these pale compared to what we typically face on land.  Hull fouling should not be an issue as this barge will not be moving at all. As the weight builds up, the older materiel should easily break away from the hull, even if it is purely cement which is unlikely.

More interesting will be the amount of biological nutrients we decide to release to support a massively thriving sea fauna.

With 180 builds each holding 200 individuals we have generated housing for 36,000 for each square kilometer.  This an important benchmark.  It means that the Salish Sea with 18,000 square kilometers has a potential build of 648,000,000 people all in a geologically safe environment.  Now the true build is much less that that ,but not excessively less either.

Now imagine extending all this to the ocean itself which has a total area of  360,000,000 square kilometers.  Again we have a real potential build of 12,900,000,000,000 folks or around thirteen trillion people.  We understand that this an unrecognizable engineering potential.

However a fraction of this is completely possible.  Throw in my land calculation of 100,000,000,000 which is way more limiting and you see that a great deal is possible.  We already have the high volume food production technology been developed as well.
.
Posted by arclein at 12:00 AM