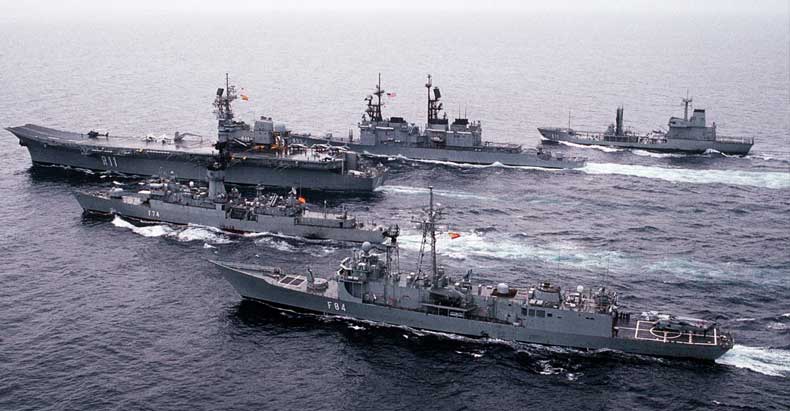 I am recently aware that a naval task force is in position off the coast of Venezuela. This informs us that it is Chinese.  This axis of unity looks good on paper and represents a serious initiative on the part of the folks from Venezuela.  It is also rather conventional and long on show.

The human assault on our southern border is way more problematic as it happens to be an indirect attack on Mexico.  Our border will rapidly seal up and thousans of likely armed civilians or even combatants will then be loose in Mexico.

The real thrust of the Chinese appears to be to shore up the Oil industry to secure supplies.  Again we hear rumors of war been pushed.  In the meantime, Maduro has long since lost his electoral mandate whatever else is been promoted.  Trump has just recognized his competitor.

This is a formal assault on the USA with the intent to make Mexico unlivable and force desperate migrants into the USA.  A better response may well be to actually allow it all to happen and then secure all the migrants in refugee camps, then march into Mexico and annex the whole country as a protectorate.  This can then be integrated into the USA using systems in place.  Twenty years would be sufficient to resolve issues of governance and the like opening the door for a proper referendum of separation or unity for each province.

The Axis of Unity’s Two Pronged Attack Upon the United States
https://www.thecommonsenseshow.com/the-axis-of-unitys-two-pronged-attack-upon-the-united-states/
Newsflash: Venezuela is a mortal enemy of the United States. In their present status they rival the threat posed by Cuba in the 1960’s. America deserves Venezuela’s wrath. Thanks to the Deep State and former Secretary of State, Hillary Clinton, America economically isolated Venezuela from the West. The Federal Reserve did not want the economic competition and political power that would come from Venezuela’s vast oil supplies as well as their cheap labor market. Subsequently, Hillary used a form of dollar diplomacy to get Venezuela isolated from her major trading partners. Vast and deadly food shortages resulted. This was an act of war committed by the Obama administration and its minion, Secretary of State Hillary Clinton. As a result, Venezuela has struck back.
As detailed in a recent publication, The Common Sense Show identified Venezuela’s instrument of aggression, the s0-called Axis of Unity.
Axis of Unity
As previously identified, the members and ancillary members of this unholy confederation are as follows:
This article will expose and explore both threats posed by Venezuela and her new found allies in the Axis of Unity.

Threat #1: The Planned Collapse of Mexico

In a very lengthy phone conversation I had with the President of the New California Movement, Paul Preston, I learned that the caravans are embedded with terrorist operatives placed in the caravans by Axis and their mission is to take down the grid of Mexico. I did not immediately publish this information because I wanted to get a second confirmation of this fact. I received a second, third and fourth confirmation of this. The plan is to so disrupt Mexico by taking down the grid, that millions of Mexicans will stream to the north and illegally and desperately attempt to enter the United States. This strategy is a matter of convenience and practicality. The organizers of the caravans can place hundreds of thousands of desperate people on the US-Mexico border. However, taking down the grid could put millions of Mexicans on the border.
Perhaps not so coincidentally, the US grid was hacked into on Thursday, January 17th. Yet, no detectable damage was done. Was this a warning directed at Trump?

Threat #2: The Chinese Have Emerged as the Military Protector of Venezuela

Mike Pompeo’s comments about going into Venezuela are clearly motivated by Venezuela’s actions.

However, China has other ideas.
In September of 2018 in a story that caught my eye, I read in multiple sources that the Chinese were engaged in sending, by ship, humanitarian aid to Venezuela. This caught my attention because when has the Chinese communist government ever helped anyone but themselves? The only reason that the Chinese would have help anyone is because they have something to gain. On September 25th, I noted these anomalies in the following short video.
As I investigated further, I discovered that the Chinese ships in Venezuela, were not therefor humanitarian aid. This flotilla contained Chinese oil workers who work under the umbrella of the Chinese military. The Chinese coalition is located off of the EAST coast of Venezuela. This will make sense after one reads the following paragraphs.
From Reuters on September 14:
China and Venezuela had signed a “memorandum for cooperation in Ayacucho bloc 6,” located in Venezuela’s vast oil-rich Orinoco Belt, without elaborating.


China will drill 300 wells in Ayacucho and extend $184 million in financing for the joint oil venture Petrozumano, the statement added. A source at Venezuelan state oil company PDVSA , who asked to remain anonymous because he is not allowed to speak to media, said oil services and procurement at Sinovensa would be handled by Chinese companies.
So much for Chinese humanitarian aid to Venezuela.
From the intelligence I am getting from my sources, this force in the first video is an American coalition which includes the UK (start at about 3:20). In the video following, I am told these are the Chinese vessels and very possibly are accompanied by Russian vessels. At stake is Venezuelan oil which is substantial. And don’t forget, the Chinese are a huge oil importing nation and they just cut off of the importation of American oil. They are obviously counting on Venezuelan oil.
An update was issued recently and it showed that in addition to the forces on the north side of Venezuela, there is an armada of ships on the east side of Venezuelan. The unknown factor is which fleet is the offensive and which is the defensive fleet. I further have been told that the Venezuelan military has been rushed to the border of Colombia in anticipation of an invasion. There are also reports that the Chinese military is flooding into Brazil, a BRICS ally in preparation for the conflict. This would strongly suggest that the Venezuelans are also expecting an American led land invasion with the prize being the oil.
Before going any further, I want publicly give credit to Kathy Rubio who on September 6, 2018, as she told me this build up was beginning.
In this last video, the publisher cited the ex-Mayor of San Juan, and who is still a prominent Puerto Ric0 politician talking about the coming invasion of Venezuela and he (Ledesma) expected to be some kind of post-invasion ruling military authority. The two aforementioned videos are well done. However, one of the forces is clearly Chinese, if not Chinese and Russian, given the appearance of the Chinese naval vessel allegedly giving humanitarian aid to Venezuela.
Conclusion
The battle lines have been drawn. The only remaining question is whether Trump will be able to secure the southern border before the onslaught begins? Also, will Pompeo make good on his threat. Is Trump will to go to war with China over this issue. And finally, do these events have anything to do with Trump’s announced further militarization of space? Will the rods of God be used against Chinese forces both off the coast of Venezuela and in the South China Sea. Most Americans are clueless about how close to war we truly are.