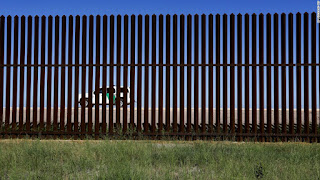 We knew this was coming.  The whole point is to seal the land borders from individuals crossing.  It happens to be effective enough as has been proven when deployed elsewhere.  Israel no longer has a security problem.

Understand that the point is not to stop potential immigrants as we have ample mechanisms in place for that.  It is to stop armed criminal combatants from entering and sowing real chaos on demand for their paymasters.

The forces that fund and promote this scheme which is now becoming obvious need to be hunted down and exterminated.

By the way, i like this steel fence idea.   Besides seeing your target you can fire all sorts of crap through it to discourage anyone attempting to cross including shot gun blasts.

The deployment will likely include combat and aviation units to add to the 2,300 active troops and 2,100 National Guard troops already at the border.
The request arrives as President Trump demands $5 billion from Congress for security and a wall along the southern border. Democrats, who took the majority of the House today, oppose a border wall. Speaker Pelosi told MSNBC in an interview that she will never allow funds to be paid for a border wall. "We can go through the back and forth. No. How many more times can we say no? Nothing for the wall," Pelosi said.

As thousands of Central Americans stream across the border, the Department of Defense also provides free medical care to the migrants after they successfully cross the border and request asylum in compliance with US law.

The Pentagon said they are considering which units to send, saying thousands more troops will be sent to the border to install fencing over a period of months and provide healthcare for migrants.
Posted by arclein at 12:00 AM