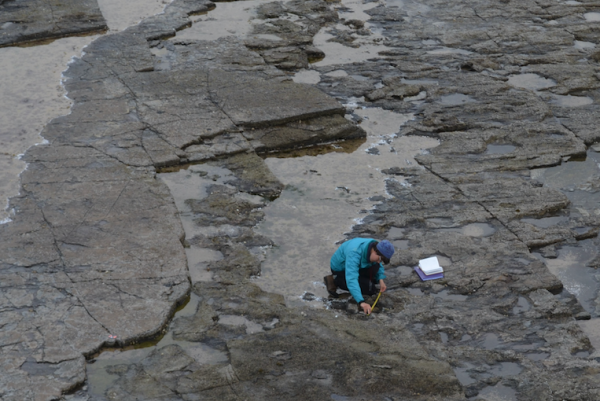 This is early days for the dinosaurs and it is important because we right away get early sauropods and early T rex.  This is important as T Rex is properly thought of as a Croc evolving to walk.  This means also that most likely they lived in those lagoons and reproduced like crocs and other reptiles there.

I have posted this meme in the past but this early close association makes my conjecture much more likely.

The biggest dinosaurs ever to have lived left footprints 170 million years ago, which were only recently discovered by scientists in Scotland.

Early sauropods – the largest animals ever to walk the planet – stomped along a lagoon on the remote Scottish hideaway of the Isle of Skye, according to Dr. Steve Brusatte of the University of Edinburgh’s School of GeoSciences.

“The more we look on the Isle of Skye, the more dinosaur footprints we find,” said Dr. Brusatte.

A field researcher involved in the measurement and mapping of the site. (SWNS) Scientists also discovered sharp-clawed footprints made by the older meat-eating cousins of the Tyrannosaurus Rex.

“This new site records two different types of dinosaurs — long-necked cousins of Brontosaurus and sharp-toothed cousins of T. rex — hanging around a shallow lagoon, back when Scotland was much warmer and dinosaurs were beginning their march to global dominance,” Dr. Brusatte said.

The impressions these primeval beasts made in the ground impress researchers, as these artifacts provide rare and important insight into the Middle Jurassic era–a period about which relatively little is known.


Paleontologist Paige dePolo, an Edinburgh University student who led the study as part of her degree, told SWNS reporters that dinosaur fossils are “very rare in rocks from the Middle Jurassic, which is frustrating because this epoch was an important time.”

Dr. Brusatte said the sauropods responsible for some of the tracks as “the first species of truly colossal sauropods that lived on Earth.”

The creatures likely waded in the shallows in northeastern Scotland, foraging for food and seeking protection from predators.

“It’s hard to say exactly why these dinosaurs were in the lagoon – but we seem to be finding more and more footprints of lagoon-dwelling dinosaurs these days.

“Lagoons were probably their homes – at least part of the time. Maybe there was abundant food there – or maybe it was a safe place to hide from predators.”

“It was found in rocks that were slightly older than those previously found at Duntulm on the island,” she said, according to SWNS.

“It demonstrates the presence of sauropods in this part of the world through a longer timescale than previously known.”

Researchers measured, photographed and analyzed the prints in a tidal area, which made access difficult.

But in spite of tidal conditions, the impact of weathering and changes to the landscape, members of the research team were able to identify two separate tracks and many isolated footprints.

A sitemap was made using photographs taken by drones with additional images obtained by paired cameras and software tailored to model the prints.

“This site is a useful building block for us to continue fleshing out a picture of what dinosaurs were like on Skye in the Middle Jurassic.”
Posted by arclein at 12:00 AM