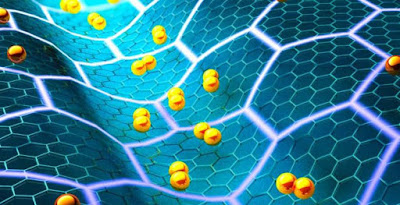 Interesting piece.  This idea can obviously be extended to other materials and much larger angles and then manipulated to perform.  Plenty of work to do, but we may also be surprised.
We have been tracking graphene from discovery through the present.  It is central to working with single layer material engineering needed for a large expansion of our manufacturing ability to match the obvious capability of observed UFOs.
all good.
.
Tuning Graphene Superconductivity

Above – Applying pressure to twisted bilayer graphene transforms the material from a metal to a superconductor. Image: Ella Maru Studio
Graphene has been heralded as a wonder material. Not only is it the strongest, thinnest material ever discovered, its exceptional ability to conduct heat and electricity paves the way for innovation in areas ranging from electronics to energy to medicine.


“Our work demonstrates new ways to induce superconductivity in twisted bilayer graphene, in particular, achieved by applying pressure,” said Cory Dean, assistant professor of physics at Columbia and the study’s principal investigator. “It also provides critical first confirmation of last year’s MIT results—that bilayer graphene can exhibit electronic properties when twisted at an angle—and furthers our understanding of the system, which is extremely important for this new field of research.”

In March 2018 researchers at the Massachusetts Institute of Technology reported a groundbreaking discovery that two graphene layers can conduct electricity without resistance when the twist angle between them is 1.1 degrees, referred to as the “magic angle.”

But hitting that magic angle has proven difficult. “The layers must be twisted to within roughly a tenth of a degree around 1.1, which is experimentally challenging,” Dean said. “We found that very small errors in alignment could give entirely different results.”


So Dean and his colleagues, who include scientists from the National Institute for Materials Science and the University of California, Santa Barbara, set out to test whether magic-angle conditions could be achieved at bigger rotations.

“Rather than trying to precisely control the angle, we asked whether we could instead vary the spacing between the layers,” said Matthew Yankowitz, a postdoctoral research scientist in Columbia’s physics department and first author on the study. “In this way any twist angle could, in principle, be turned into a magic angle.”

They studied a sample with twist angle of 1.3 degrees—only slightly larger than the magic angle but far enough away to preclude superconductivity. Applying pressure transformed the material from a metal into either an insulator—in which electricity cannot flow—or a superconductor—where electrical current can pass without resistance—depending on the number of electrons in the material.

“Remarkably, by applying pressure of over 10,000 atmospheres we observe the emergence of the insulating and superconducting phases,” Dean said. Additionally, the superconductivity develops at the highest temperature observed in graphene so far, just over 3 degrees above absolute zero.”

To reach the high pressures needed to induce superconductivity the team worked closely with the National High Magnetic Field user facility, known as the Maglab, in Tallahassee, Florida. “This effort was a huge technical challenge,” says Dean. “After fabricating one of most unique devices we’ve ever worked with, we then had to combine cryogenic temperatures, high magnetic fields, and high pressure – all while measuring electrical response. Putting this all together was a daunting task and our ability to make it work is really a tribute to the fantastic expertise at the Maglab.”

The researchers believe it may be possible to enhance the critical temperature of the superconductivity further at even higher pressures. The ultimate goal is to one day develop a superconductor which can perform under room temperature conditions, and although this may prove challenging in graphene, it could serve as a roadmap for achieving this goal in other materials.

Materials with flat electronic bands often exhibit exotic quantum phenomena owing to strong correlations. An isolated low-energy flat band can be induced in bilayer graphene by simply rotating the layers to 1.1°, resulting in the appearance of gate-tunable superconducting and correlated insulating phases. Here, we demonstrate that in addition to the twist angle, the interlayer coupling can be varied to precisely tune these phases. We induce superconductivity at a twist angle larger than 1.1°—in which correlated phases are otherwise absent—by varying the interlayer spacing with hydrostatic pressure. Our low disorder devices reveal details about the superconducting phase diagram and its relationship to the nearby insulator. Our results demonstrate twisted bilayer graphene to be a uniquely tunable platform for exploring correlated states.
Posted by arclein at 12:00 AM