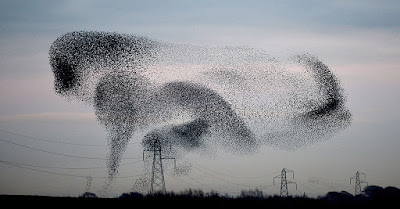 To understand the absurdity of all this, consider that i have never heard of the term nouns of assemblage.  It may well have been made up for this particular item.

It is still fun to read and is good enough for that.

You may not know the term “nouns of assemblage” by name, but you definitely know it in practice. Nouns of assemblage are everyone’s favorite trivia question, and they’re practically never-ending: What’s a group of owls called? A parliament. Hippopotamuses? That would be a bloat.

Everyone loves a murder of crows, and we reference flights of stairs without even thinking twice about how that’s kind of a weird term for them. Though collective nouns exist in other languages, English is particularly full of these colorful, largely nonsensical linguistic specimens. In fact, many may have originated as a means to show off obscure, cultured, and self-consciously amusing vocabulary.

Who decided that certain objects and animals require specialized terms when they congregate, and why? Great question. Let’s gather to discuss.


“Terms of venery” are collective nouns that refer specifically to animals. “Venery” is itself a mass noun, an archaic term for hunting or “sexual indulgence.”

According to the United States Geological Survey:

The Book of St. Albans

While terms like herd, swarm, and pack seem more or less reasonable, others are downright ridiculous—and that’s probably because they were never meant to be taken seriously. According to the University of Cambridge, the Book of St. Albans, first printed in 1486, was famous for its compilation of lists—mainly lists about things that were considered to be of gentlemanly interest at the time. They included, among other things, heraldic devices, recognized dog breeds, and collective nouns. The collective nouns were said to refer to animals meant to be hunted—“Compaynys of Beestys and Fowlys,” as they put it. But the list also included a doctrine of doctors, a superfluity of nuns, and an execution of officers.

It’s been hypothesized that many of these terms were mostly intended as kennings, complicated metaphors used to describe something simpler. The purpose of such phrasing would have been to showcase how learned and proper the user of the word is. Some of the more practical terms took hold over the years, while the more fantastic ones have mostly faded into obscurity, only to be trotted out during Trivial Pursuit.


Million-Dollar Question
Does anyone actually use these unusual terms?

Just because nouns of assemblage exist doesn’t mean anyone actually uses them. Outside of Jeopardy! and trivia night, you’re unlikely to hear them come up in conversation—even in professional circles. Nicholas Lund of Audubon magazine wondered if people who live and breathe the study of these animals use the “correct” terminology amongst themselves. The answer, overwhelmingly, was no.

Lund asked Dr. Noah Perlut, bobolink researcher at the University of New England, if he uses the term “chain” to refer to a group of bobolinks. Perlut’s response: “I’ve now studied bobolinks intensively for 14 years and, no, I’ve not heard it.”

He tried a woodcock expert, asking Jake Walker—who wrote his Master’s thesis at Trent University in Ontario on the creatures—if he often said “a fall of woodcocks” when referencing a group of them. Again, the answer was negative. “I sure as hell would never say it, nor have I heard it said.”

Finally, Lund consulted Dr. Lindsay Hogan, an Australian marsupial biologist, to see if she called a group of wombats a “wisdom.” The term is not only not used, Hogan reported, but completely unnecessary, as “wombats do not form groups in the wild.”

“I’ve never used any of these and would have no idea what someone was talking about if I heard them.”

—Dr. David Stern, Auburn University reptile expert, in response to whether he used the terms “bask of crocodiles,” “generation of vipers,” or “Congress of salamanders.”

A Flock Of Seagulls by any other name...

We’ve got some bad news for Mike Score and his ‘80s synth-pop band: According to the US Fish and Wildlife Service, their band technically should have been named “A Colony of Seagulls” instead of a flock.

According to Score, the band took the avian portion of its name from the Richard Bach book Jonathan Livingston Seagull, a fable about a seagull who yearns for a “higher way of living than scuffing the tracks of others.”

The rest fell into place when members of the band attended a Stranglers concert. “One of their songs was called ‘Toiler on the Sea,’” Score told Worcester magazine. “We were in the front row. [The singer] looked like he looked right at us and called out, ‘a flock of seagulls.’ We took it as a sign. … Strangely enough, from that moment on, everybody noticed us. Everyone was like, ‘Wow, what a strange name.’ I think the name made people want to hear what we were about.”

The connection between some of these nouns and their group descriptors are certainly not subtle—which is part of what gives away their frivolity. (A harmony of musicians? C’mon.)

But what does flying have to do with stairs? According to Word Detective, our usage of the word “flight” to refer to a number of stairs dates back to the beginning of the 18th century, and may have been borrowed from the French phrase “volée d’escalier.”

And when you stop to think about it, it makes perfect sense: Though less dramatic, we do use stairs as a means of transportation to ascend higher into the air. Flight! And, of course, the platform at the top of the stairs or between two sets of stairs is often called a landing—because that’s what you do after taking a flight. January 04, 2019