The Monster In Our Woods 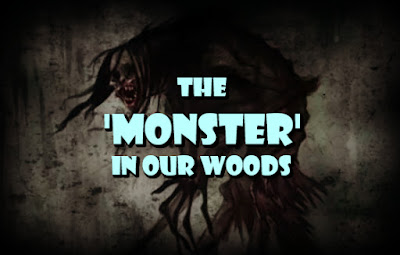 What we have here is the tell of a Giant Sloth.  Then we finally see the creature and while it has the upright stature provides something much more intimidating and even other worldly.

Yet recall this is the one creature able to make you see what it wants you to see. There is plenty of indication that this creature creates lures as well.  In this case it wants to drive the witness out of its caching area.  After all this is a maggot farm.

I now think that there is one giant sloth that is responsible for much of our supranational woodland reports.  The tell is the smell of rotting meat and animal scraps lying around.
..

The Monster In Our Woods

I recently found the following account. I'm not sure of the location, but I do believe it was from the U.S. Upper Midwest:


It all started out a few months ago when we moved into our new home. I grew up in a rural community, but there were plenty of neighbors, and mostly fields around — no woods. Given that I am the youngest child, my parent waited until I was done with high school to move, as to not affect my already established life.

Although we had always lived in a small, rural community, my parents were ready for something a little more secluded — something with a lot of acreage, woods, and a place to shoot.

They put my childhood home up on the market, and soon found their dream home, which is where I am currently, and desperately writing this story. The house and the property are beautiful. It’s a large, turn-of-the-century house facing 15 acres of land, the majority of which, are woods, and a nice half-acre pond. The best part, or so I thought, is that there are no neighbors within a mile of us.

At first I really enjoyed it. Being out in the woods was very much a cathartic experience for me. It helped shed the stresses of school and studying. Being among the tall trees and the surrounding nature made all of my problems seem totally insignificant, so I made a habit of going on regular walks through the woods.

As the weeks went on, I started noticing strange things as I went on my walks. I would find partially-eaten deer scattered along the leaf-littered ground, accompanied by a putrid, rotting smell, which I attributed to the carcass in front of me. At first, I thought nothing of it. “It was probably coyotes”, I would tell myself. Other than that, I thought nothing of it, but starting carrying a gun with me on my walks in case I encountered the animal that was responsible for the carnage I saw in front of me.

As the days went on, I started noticing more and more mutilated deer scattered across the floor of the woods, still accompanied by the rotting smell, which I again attributed to the animals.

If the increasing number of mutilations weren’t enough, I started to notice a change in the sounds coming out of the woods. What was once a cacophony of sounds was now mostly dead silence, minus the low, guttural growl that seemed to be becoming more prevalent, more pronounced, and more insidious each day.

By this point, I had stopped going on my little walks. Gun or no gun, I didn’t want to risk the chances of facing whatever was causing these events. That being said, my curiosity eventually got the best of me one night as I heard its growls. I decided that I was going to go get a trail cam, and set it up out in the woods the following day, in hopes of finally seeing what was out there.

The next evening, after work, I gathered up what little courage I had left, and, camera in hand, went walking out into the very woods I had promised myself I would stay out of.

I never did get to set up the trail cam. I lost it somewhere in the woods while I was in a panic, running for my life.

I made it about 100 yards past the tree-lines into the woods, where I decided to stop and set up the camera. I thought it was a good place to set it up, and, quite frankly, I was too scared to go any further. After all, I wanted to spend as little time out there as possible given the ongoing events, and the fact that it would be dark soon didn’t help.

Already on edge, every creak of the wood, and every crunch in the leaves sent me into a panic. Rushing to set the camera up, I drop it, sending it to the leaf-ridden ground with a thud.

Murmuring under my breath, cursing myself for being out there, I bent down to pick the camera up, when I started to smell that putrid smell of rotting flesh again. I carefully looked around, checking my surroundings to see if anything was out there. I could feel something watching me, but I couldn’t see anything.

Just as I was finishing picking my supplies off of the ground, I heard that low, guttural growl again, as well as the snap of a branch to my right. I quickly turn, seeing a human-like creature standing there, staring at me. I was completely frozen with fear. It had human features: standing on two legs, and it had feet and hands. The two things that threw me off, however, was the fact that it’s skin was charred black, as if it had been burnt in a fire, and, most disturbingly, it had no upper or lower lips. Although mostly bald, a few thin, straggling hairs stuck every which way out of its scalp.

It’s sharp teeth were hanging out like hypodermic needles. With the absence of lips, it’s raw, red gums hung out in the open. Thick strings of what appeared to be saliva dripped off of its chin in a persistent stream.

For one single, brief moment, the world around me seemed to stop. I quickly went through options on what to do. There were really only two viable options: either stay exactly how I was, and get attacked, and most likely killed by this thing, or I could get the f*ck out of there. I chose the latter.

I quickly scrambled to me feet, and ran as fast as a could, throwing my camera, in vain, at the creature behind me. In the chaos of what had just occurred, I found myself to be momentarily lost after running in what I thought was the right direction for what felt like 20 minutes, but I’m sure was only 30 seconds. Looking around and not seeing the spawn of hell that I had just encountered, I stopped to collect myself, and try to find the way back to the house.

I finally decided on the general direction in which I should head, when I heard a commotion that almost sounded like a horse pounding its hooves on the dirt. I look behind me and saw that thing, whatever it was, running at me on all fours, mucous-like spit flying out of the corners of its mouth, like a rabid dog.

I ran as quickly as I possibly could without daring to look behind me. Although I would not look at it, I could hear it galloping behind me, and smell it’s rotted flesh.

Tears ran down my eyes, as I thought that there was no way possible to make it out of the woods alive, when I finally saw the lights of my house out of the clearing. Using what little adrenalin I had left to sprint the 200 yards or so to my back porch, I quickly opened the door and slammed it shut, not daring to look out the window.

It’s been about a month now since that happened. I haven’t told anyone, and I will not dare to go back out in those woods. I’ve been doing a lot of research to see if I could find any clues as to what that thing might have been. I’ve exhausted myself, but I think I may have come to a conclusion. The closest thing I could find was possibly a skinwalker. I know my sighting doesn’t entirely match up with the stories I’ve heard, but it’s the closest thing I’ve found. ST

NOTE: may possibly be a Wendigo or Fleshgait. Lon
Posted by arclein at 12:00 AM