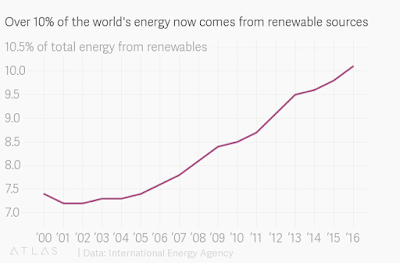 So many positive trends continue unabated and the most important one is that we fell below one billion folks lacking electricity.  We are truly entering the end game for the true elimination of poverty.  This could have been done a long time ago but even without real economic insight we will soon get there.

It is also true that we are converging toward a single uniform material culture in which all men and women participate equally.  The onslaught of cheap Chinese manufactured goods will soon be matched by similar flows out of India.  Informing all that is total access to the internet through cell phones.

Thus we now have a uniform knowledge culture.

A lot went wrong in 2018, so much that it feels necessary to remind people of the quiet, positive advances that were also made. While it may be hard to believe, 2018 was in many ways the best year yet to be a human living on Earth (as we show here in 15 charts).

For example, one of the worst pieces of news was that carbon emissions are set to rise this year over last. But the share of global energy that came from renewables finally passed 10%, and, for the first time, in 2017 the number of people without electricity fell below 1 billion. (Throughout, figures were published in 2018 and reflect the latest data available.)

Electricity access is essential to health, education, and economic stability, and all of those measures also improved in the past year. One of the simplest ways to assess global poverty is to compare the difference between what the average person makes a day, and a predetermined global poverty line. The difference was about $0.25 in 1990, and is now nearing $0.05; every year the gap closes a little more.

Meanwhile, literacy rates have been steadily climbing for decades, and even a small change can make a huge difference: The 0.23 percentage-point increase from 2015 to 2016 means about 11.5 million more people can read.

Probably the biggest invisible improvements the world sees year to year are essential indicators of overall global public health, like rates of infant mortality, maternal mortality, childhood stunting, and teen pregnancy. These are important, because they represent access the average person alive has to health-care professionals, facilities, medicine, and more. All of these rates have been falling in the past few decades, in some cases dramatically, and every single one fell again in 2018.

Another positive trend that can fly under the radar, especially in wealthier countries, is how the global gender gap in education continues to close. New data published this year show that, in 2016, there were 99.7 girls enrolled in primary and secondary school for every 100 boys. For comparison, in 1986 that number was 85.1. Again, it might seem incremental, but given the size of the global population, those tiny increases have outsized impact.

There’s obviously much more to do for women’s equality. There’s also so much to do for the environment, to reduce poverty and conflict, to improve access to clean water and sanitation, to increase food security, and to eradicate preventable diseases and improve public health worldwide. But being worried for our future doesn’t mean we can’t or should not be grateful for the good things we’ve already done. —Elijah Wolfson
Posted by arclein at 12:00 AM