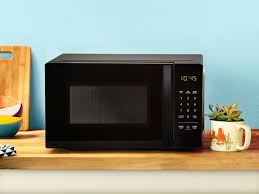 My own experience informed me that heating water and tea and coffee was quite acceptable.  This easily extended to starches as well and particularly to making rice with the right equipment.  I would like to see feedback on any changes there.

It all falls apart when dealing with complex biologicals such as meat and vegetables.  Our own senses told us as much and the science here really spells out just how bad it happens to be.  This is no minor problem.

I have actually stopped using it at all except for the odd item at restaurants.  Back to making my own starches with boiling water.

What is described here is a serious loss of nutrient integrity.

I can remember the days growing up in the 1950’s and 1960’s, when we prepared foods without a microwave oven. Water was boiled on the stove. Chicken was baked in an oven. Vegetables were steamed, baked, or sautéed. Food was whole and fresh. Even a TV dinner was baked in the oven, which took about 15 minutes to warm. And then, modern science and technology brought us the microwave oven that could heat food rapidly, from 30 seconds to a couple of minutes.

The industry has long claimed that microwave cooking protects the nutrient content of foods. Somehow, in tasting foods that came out of a microwave oven, the texture was changed as was the flavor. Foods cooked or reheated in microwave ovens became rubbery and lacked the savory smells and layered flavors that come from cooking foods slower and longer.

Does this mean an occasional microwaved meal will be harmful? Not likely. But what about a steady diet of eating foods cooked at such a high heat? Do the sensitive compounds in food, such as amino acids, fatty acids, vitamins and phytonutrients change? It appears so. Read on to follow the scientific literature surrounding the depletion of our soil, foods, and health as a result of modern farming, food processing, microwave cooking, and not eating enough fresh, natural, uncooked, organic whole foods.
Quan stated that more damage was done to the milk by microwaving than by other methods of heating, concluding: “Microwaving appears to be contraindicated at high-temperatures, and questions regarding its safety exist even at low temperatures.”

Note: Needless to say, we do not recommend cooking food in microwave ovens, though mildly heating leftovers may not pose the same problems as discussed above. Also, microwaving fatty foods in plastic containers leads to the release of dioxins (known carcinogens) and other toxins into your food. Common microwavable foods include pizzas, chips, and popcorn. Chemicals released include polyethylene terpthalate (PET), benzene, toluene, and xylene.

Additionally, microwaving creates new compounds that are not found in humans or in nature, called radiolytic compounds. We don’t yet know what these compounds are doing to your body, but they are not health-promoting.

Eating fresh, uncooked, or minimally heated fruits and vegetables, nuts and seeds, herbs and spices are the basis of an Eating for Healthâ„¢ meal plan. With whole grains and legumes, cooking them on a stove top by boiling and simmering them until tender is advised.

For flesh foods, steaming, sautéing, baking, or blending into slow cooked crock pot soups and stews is advised. Dairy products, such as raw milk cheese, from goats, cows, or sheep, are most nutrient-rich when unheated. Raw, organic cheese is best added to salads or warm grains, legumes, or vegetables without heating the dish in a high heat oven, broiler, or microwave oven.

Article Sources:
Posted by arclein at 12:00 AM