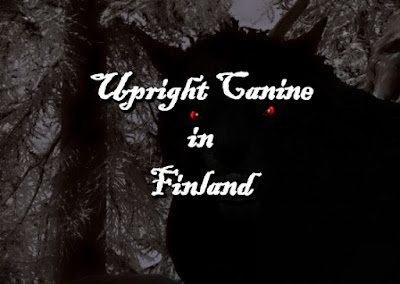 Europe presently lacks a forum for collecting these reports..  Thus i am always pleased to see one.

This is again the dogman or what i have identified as the Giant Sloth.  He got both the extreme odor and to actually see the creature full on.  Do note just how thin it is.  It also walks away.  Again it is not inclined to run

We have reason to expect this creature throughout Eurasia and it is also good to establish that it is present as far north as Finland..

So about 2 years ago, I had an encounter with something I can't explain and the reason I'm writing this is because I saw some strange footprints yesterday where I encountered it 2 years ago. (I live in Finland, near the coast)

Two years ago, I was out hunting and it was getting late and dark so I decided to head back home. I had about 2-3 km walk through the forest to get to my car. It had gotten pitch black outside at this point so I had an LED headlamp for light as I walked.

As I walked I kept hearing unusually loud sounds. I knew something big was moving. I was 100% sure it was a moose as I've encountered lots of them in the forest and they do make lots of noise/vibrations when they walk.

I couldn't see anything though and it was getting closer to me. All of a sudden this super awful smell hits me, it smells like feces and something really rotten. My hair stands up and I raise my shotgun, as my whole body instinctively tells me to run.

I just stand still and listen. As the sounds get closer I see what looks like a humanoid figure standing on two feet, really tall, had to be easily over 2 meters, but slender and muscular at the same time and kind of crouched down posture. It looked almost like a werewolf from movies, but at the same time not. It was quite far away, so my light barely went so far, but I could see it. Its eyes shined red from my LED headlamp as well.

It looked at me for about 3 seconds, made no sounds, it was breathing weirdly. (I think it could smell the two ducks I had in my backpack) It slowly walked away. I even filmed a bit as it started walking with my phone, but it's poor quality as my phone at the time was old (Samsung S2) and it was dark, so you can't really see it, just hear lots of noise.

Anyway, I told some friends and fellow hunters. A couple have heard or seen strange things as well, but nothing like this. Bos
Posted by arclein at 12:00 AM