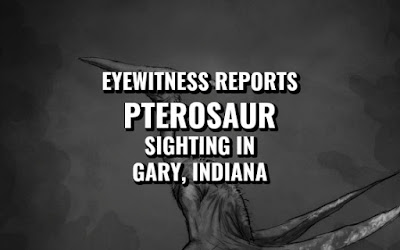 I received the following report by email today (Wednesday, January 23rd). I followed-up with a telephone call:

Sir, I had the experience of seeing this big grayish prehistoric bird. It was 7:40 in the morning on a clear sunny day. I was driving down Broadway in Gary, right across from the gas station right before you get on the exit going I-65 South. I was shocked wandering why no one else notice this creature. It didn't have a man face. The beak was pointy, the wings were really long. The wings did not flap. The creature flew low enough for me to just look up, and there it was.
At first I thought that I was crazy, so I waited a couple of days before I told my husband. I don't drink, or do drugs, so I know what I saw.
After a couple of weeks, I saw it again in the same area, but not the same spot. Also this one was the same but smaller. It did not look like a bat, or a owl. So I googled prehistoric birds, and there I saw the best picture to describe what I saw. After that I looked up at the sky often, but hadn't seen it again. I also thought about reporting it, but people of course would think that I was crazy. It came to me that woody, dense areas is where they hide. PC


NOTE: I called PC immediately after receiving her email. She gave me the exact location of the sighting, an area near a gas station that once had a fairly thick grove of trees in the vicinity. The trees have since been cleared. This is in the area of W 37th Ave eastbound between Broadway and I-65.

This sighting occurred in the late spring / early summer of 2016. PC had just taken her children to school and saw the creature on her way home. She stated that the creature was quite large...the body was approximately the length of a van and the wings had a width at least double the length. PC is positive that this was a Pterosaur-like being, after looking for an example online.

A few days later, her friend also observed this creature. Her husband witnessed a similar creature several weeks later. I'm sure that other residents in the area were aware of the presence of these creatures at the time, but were fearful of reporting their sightings.

PC's husband's friend told him about the recent Gary, Indiana sightings, and she decided to contact me. I'm not discounting that this may have been a remote controlled device...though the size and the general socio-economic area is puzzling, if that is the case. My team is following up on this incident, along with all previous and subsequent encounters. Lon