The Uncertain Future of Particle Physics 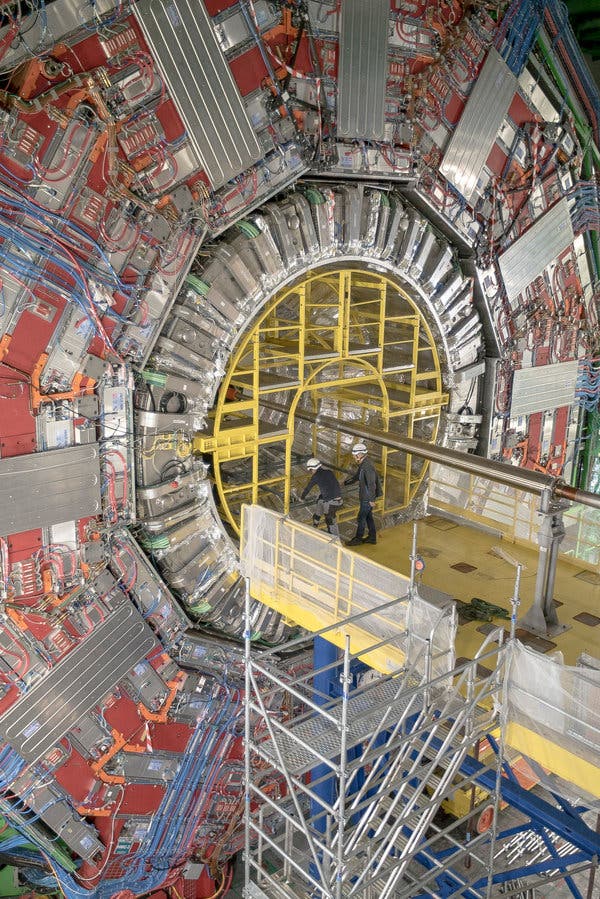 To put the problem of empirical physics into the proper perspective you need to understand that from my own understanding through my Cloud Cosmology derived from understanding the Space Time Pendulum, that it is correct to state that the electron has approximately 2400 vertices and by implication that the neutron around three million vertices.  Fortunately it is all internally symmetric except the foundational particle or neutrino does not allow perfect packing. Yet the sheer scale of three million vertices generates a simulation problem that will still boggle our best computers the moment i want to map curvature changes throughout the simulation.

The good news is actually Cloud Cosmology. It provides a clear starting point and allows the effect of symmetries to be predicted and studied.  It also explains the success of the ancients using their much more limited form of Mathematics using sound resonance.  The Great Pyramid could well have been their version of the Hadron Collider.

My key point though is that the gross symmetric structure of a neutron is predictable and also that we can now use this knowledge to predict the best configuration for larger atoms allowing us to follow up on experiments now two thousand years old in which compounds were recycled over and over again in order to trigger elemental phase changes..  .
The Uncertain Future of Particle Physics

Ten years in, the Large Hadron Collider has failed to deliver the exciting discoveries that scientists promised.

Dr. Hossenfelder is a research fellow at the Frankfurt Institute for Advanced Studies.

The Large Hadron Collider is the world’s largest particle accelerator. It’s a 16-mile-long underground ring, located at CERN in Geneva, in which protons collide at almost the speed of light.CreditLeslye Davis/The New York Times

The Large Hadron Collider is the world’s largest particle accelerator. It’s a 16-mile-long underground ring, located at CERN in Geneva, in which protons collide at almost the speed of light.CreditCreditLeslye Davis/The New York Times


The Large Hadron Collider is the world’s largest particle accelerator. It’s a 16-mile-long underground ring, located at CERN in Geneva, in which protons collide at almost the speed of light. With a $5 billion price tag and a $1 billion annual operation cost, the L.H.C. is the most expensive instrument ever built — and that’s even though it reuses the tunnel of an earlier collider.


The L.H.C. has collected data since September 2008. Last month, the second experimental run completed, and the collider will be shut down for the next two years for scheduled upgrades. With the L.H.C. on hiatus, particle physicists are already making plans to build an even larger collider. Last week, CERN unveiled plans to build an accelerator that is larger and far more powerful than the L.H.C. — and would cost over $10 billion.


I used to be a particle physicist. For my Ph.D. thesis, I did L.H.C. predictions, and while I have stopped working in the field, I still believe that slamming particles into one another is the most promising route to understanding what matter is made of and how it holds together. But $10 billion is a hefty price tag. And I’m not sure it’s worth it.


In 2012, experiments at the L.H.C. confirmed the discovery of the Higgs boson — a prediction that dates back to the 1960s — and it remains the only discovery made at the L.H.C. Particle physicists are quick to emphasize that they have learned other things: For example, they now have better knowledge about the structure of the proton, and they’ve seen new (albeit unstable) composite particles. But let’s be honest: It’s disappointing.


Before the L.H.C. started operation, particle physicists had more exciting predictions than that. They thought that other new particles would also appear near the energy at which the Higgs boson could be produced. They also thought that the L.H.C. would see evidence for new dimensions of space. They further hoped that this mammoth collider would deliver clues about the nature of dark matter (which astrophysicists think constitutes 85 percent of the matter in the universe) or about a unified force.


The stories about new particles, dark matter and additional dimensions were repeated in countless media outlets from before the launch of the L.H.C. until a few years ago. What happened to those predictions? The simple answer is this: Those predictions were wrong — that much is now clear.


The trouble is, a “prediction” in particle physics is today little more than guesswork. (In case you were wondering, yes, that’s exactly why I left the field.) In the past 30 years, particle physicists have produced thousands of theories whose mathematics they can design to “predict” pretty much anything. For example, in 2015 when a statistical fluctuation in the L.H.C. data looked like it might be a new particle, physicists produced more than 500 papers in eight months to explain what later turned out to be merely noise. The same has happened many other times for similar fluctuations, demonstrating how worthless those predictions are.

To date, particle physicists have no reliable prediction that there should be anything new to find until about 15 orders of magnitude above the currently accessible energies. And the only reliable prediction they had for the L.H.C. was that of the Higgs boson. Unfortunately, particle physicists have not been very forthcoming with this information. Last year, Nigel Lockyer, the director of Fermilab, told the BBC, “From a simple calculation of the Higgs’ mass, there has to be new science.” This “simple calculation” is what predicted that the L.H.C. should already have seen new science.


I recently came across a promotional video for the Future Circular Collider that physicists have proposed to build at CERN. This video, which is hosted on the CERN website, advertises the planned machine as a test for dark matter and as a probe for the origin of the universe. It is extremely misleading: Yes, it is possible that a new collider finds a particle that makes up dark matter, but there is no particular reason to think it will. And such a machine will not tell us anything about the origin of the universe. Paola Catapano, head of audiovisual productions at CERN, informed me that this video “is obviously addressed to politicians and not fellow physicists and uses the same arguments as those used to promote the L.H.C. in the ’90s.”

But big science experiments are investments in our future. Decisions about what to fund should be based on facts, not on shiny advertising. For this, we need to know when a prediction is just a guess. And if particle physicists have only guesses, maybe we should wait until they have better reasons for why a larger collider might find something new.


It is correct that some technological developments, like strong magnets, benefit from these particle colliders and that particle physics positively contributes to scientific education in general. These are worthy investments, but if that’s what you want to spend money on, you don’t also need to dig a tunnel.


And there are other avenues to pursue. For example, the astrophysical observations pointing toward dark matter should be explored further; better understanding those observations would help us make more reliable predictions about whether a larger collider can produce the dark matter particle — if it even is a particle.


There are also medium-scale experiments that tend to fall off the table because giant projects eat up money. One important medium-scale project is the interface between the quantum realm and gravity, which is now accessible to experimental testing. Another place where discoveries could be waiting is in the foundations of quantum mechanics. These could have major technological impacts.


Now that the L.H.C. is being upgraded and particle physics experiments at the detector are taking a break, it’s time for particle physicists to step back and reflect on the state of the field. It’s time for them to ask why none of the exciting predictions they promised have resulted in discoveries. Money will not solve this problem. And neither will a larger particle collider.
Posted by arclein at 12:00 AM