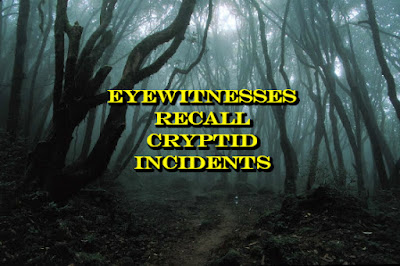 Three unusual reports, but that last one was an apparent Giant Sloth that appears to look like the artistic representations we have seen.  We see the word mane been used as well.  It does not present as the Dogman but that may simply be the back view here.

The creature then made the witness not see it. This is business as usual.  What is do find important is that the witness identified it as a Giant Sloth.  That is the second such ID so far.

I am more disturbed by its closeness to a home.  Up that tree it went into ambush position.
.


My encounter was on October 22, 2005 on a stretch of back road in the Mojave desert in the vicinity of Joshua Tree and Yucca Valley, CA. It was the 3rd or so day of quail season and I was all tagged up and ready to go hunting. I had a little Jack Russell Terrier named Gus that a friend let me borrow for the day since I can't own dogs or cats (allergic as all hell). I drove out and parked my Jeep on a turnout at a dirt road intersection. There are a zillion dirt roads out there, and some of the bigger ones actually have stop signs at the intersections.

It was a good day, and getting a little late but I hadn't hit my bag limit yet. I decided that I would stay out a bit past sundown to try and bag the last few birds on my permit. I was dressed pretty warmly, and Gus didn't seem to mind so away we went. By the time I hit my bag limit the sun had been over the horizon for about an hour. Getting back to the road was easy enough, and following it back to the Jeep was as well. Around the time full twilight set in I came to an intersection with stop signs in both directions, and was getting my bearings when Gus froze mid trot and immediately starting growling with his hackles up. He was a pretty chill dog so watching him go from happy little derp to DEFCON 1 so fast was alarming on it's own. I scanned the area to see what he might be upset about, because my first guess was javelina (wild pigs) and all I had was a shotgun loaded with bird rounds.

As I said, these were dirt roads. Each road is roughly the same width as an average 2 lane city street. On the corner opposite the one we were on, I spotted a creature moving with the same general gait as a rooster, but without bobbing it's head. What clued me in initially that it wasn't a chicken was the simple fact that from head to foot it must have been close to 3 feet tall. Based on body mass, I'd estimate that it weighed about 40-50lbs. I tied Gus' leash to my belt so he wouldn't bolt after it and waited for it to wander off. It loitered on the corner for a minute, then without making so much as a flutter, it made a roughly 9 foot standing leap from the ground to perch atop the stop sign. Definitely not a chicken. At this point I decided it was prudent to be armed, so I popped 2 fresh shells in my shotgun and held it at the ready. When I looked back up, I saw it's eyes. The 2 things that immediately sprang to mind (this is where the biology geek comes in) were that 1) They were forward facing, meaning this animal was likely predatory, and 2) They were proportionally ENORMOUS, meaning it was likely fully nocturnal.

I realized that a 3 foot tall, predatory, nocturnal, 40 lb animal that can make a 9 foot standing leap was now regarding me from a high perch, albeit from roughly 40 feet away, and that I was in a bad position. I leveled my shotgun and unloaded both barrels at it. After the echoes died down, it was still perched at the top of the stop sign, but making odd "chirrup" noises that sounded a lot like sneezing. I was reloading when it jumped down from the stop sign and ran away from us through the brush on the adjacent corner. I finished reloading, waited until Gus calmed down and jogged back to the Jeep. On the way back through I hit my trail lights at the intersection this had happened at and saw that the stop sign had definitely been peppered well with shot, and that the majority of it had been centered on the animal. This animal had taken a 9 foot standing leap soundlessly, perched perfectly on a 2" square area and taken 2 12 gauge loads of bird shot center mass, and SNEEZED at me. On the way out of town I told the story to the Spanish-speaking clerk at a local gas station who laughed and told his coworker "You hear that? This guero just ran into El Chupacabra!" OJ


I live in Chattanooga, TN just a few minutes away from Harrison Bay. This year I started with 4 cats and would let them roam around outside and they would always come back in when it got dark. One of them didn't come back one day and we didn't think much other than they must of wanted to stay out longer and would let them in first thing in the morning. After a week of no sign of them we gave up hope and thought maybe a stray dog or wild animal or something got her. We kept a closer eye on the cats from then on but didn't have any problems until a couple months later when another one disappeared. We now only let a single cat out who is older and meaner and can protect himself and even then he comes back in before it gets dark at all.

Now the beginning of my encounter is from last night (12/28/2018). I was driving home from work and the closer I got to my house the thicker this strange misty fog became. I came inside after feeling a little uneasy and went to bed after making sure both cats were inside and accounted for. I woke up at 3am to the sounds of a cat making an awful wailing noise outside my front door. It sounded almost like a siren from how it rose and fell in pitch. I looked to make sure my cats were ok and they were huddled up under my tv stand looking terrified at the front door where the wailing was coming from and I listened closer and the wail sounded...off. It sounded like a wail on the surface but had a guttural growl undertone and I felt a strong urge to open the door but then I had a feeling tell me NOT TO OPEN it. I smacked the door instead and the thing made a loud garbled wailing growl sound as it scampered away. I then went to lay back down around 3:30 at this point and it started back up outside my bedroom window at this point. This time however it would wail and then make a sound like it was fighting another cat but there was only creature making noise and it went back on a loop of wailing. Around 4am it came to a stop. When I came outside this morning to go to work there was this white fluff all over the ground. LH

I was driving home in the summer of '97 midday, no clouds, turning a corner at the bottom of the hill to my street. It's a hard left turn and opposing traffic frequently miscalculates how much they have to slow down to stay in their lane especially if they don’t look ahead to see if anyone is coming.

So I was turning left, looking far left up the hill when out of peripheral vision to my right there was what could only be described as a large, and by large I mean the size of an SUV, creature wrapped around the base of an old tree. It was gripping the trunk about five feet off the ground like a squirrel, covered in long brown hair except for it’s head where it was darker and short like a horse. The head was anteater like, but no where near as long or thin in proportion.

My abrupt turn spooked it. The dense mane on it’s back inflated as it sprinted up the tree like a bear. I could see incredible muscle mass ripple under the thick coat, and it shook the entire four story tree. The whole sighting happened in about a second while I was focused on taking the turn, so movement is what made me notice it. When I looked in it’s direction for a brief flash I saw massive hind legs blast thru bark and propel it’s torso straight up the trunk and then nothing. The sheer size and force of it did scare me but the WTF element made me stop.

I backed up about 20ft to get a better look at the area which was the front yard of a house set back in the woods. Things were completely normal. I didn’t think it was something that was actually there then, or in retrospect. Did I see the ghost of a giant sloth? PS
Posted by arclein at 12:00 AM