The Deprivation of Socialism in the Soviet Union 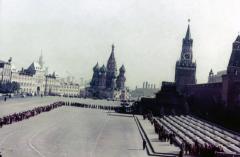 The sheer poverty of the USSR is well described here.  The only possible way to survive these conditions would be to participate in a black market as much as possible and that would have to include the folks in charge.  After all there was nothing conveniently available otherwise.

No wonder Gorbachev folded when Canada gave him a grand tour back in the day of our farms and our super markets.

The clear message here is that the whole economy was elsewhere in fact operating in those hours not demanded by the state..

Scenes of food shortages, long lines, and fed up Russians were commonplace in the Soviet Union. Moscow believed it could deliver a world of prosperity and egalitarianism by instituting advanced mathematical calculations to manage the economy. How did it turn out? Well, like every good economist, when things became so bad, the smartest men in the room turned to the one publication that could save mankind: the Sears Catalog.

Rather than using the market pricing system, Soviet officials mirrored their Chinese counterparts and combed through the iconic but now defunct catalog to learn about prices for consumer goods. Despite the intensive study and analysis of the cost for a pair of long johns, Moscow could not alleviate the misery.

Using formulas to manage a national economy from the discomforts of a decrepit bureaucratic monstrosity, the Soviet government failed at just about everything. At least they created an abundance of jokes, as often told by Ronald Reagan.

It is standard fare for comrades to discuss the gulags, Joseph Stalin, Nikolai Gorbachev, and the Cold War when musing on the history of the Soviet Union over a bottle of vodka. But it is rare to enter into an extensive conversation on the economic policies employed by the U.S.S.R. over a 70-year period.

Like every other socialist experiment throughout the 20th and 21st centuries, the ideology’s hallmarks — price controls, production quotas, central planning, and totalitarian government — were ubiquitous. And, akin to these pursuits, widespread misery and suffering were the orders of the day.

Eschewing the capitalism of the West, the Soviets depended on their new gods’ wisdom to achieve economic success and world domination: a drunken anti-Semite by the name of Karl Marx, a cruel tyrant in Vladimir Lenin, and a paranoiac Joseph Stalin.

The Soviet Union employed all of the policies that today’s socialists and communists fantasize about as they sip their lattes, watch CNN, and sport t-shirts displaying the hammer and sickle: state ownership of the means of production, collective farming, communal living, nationalization of industrial assets, and centralized planning. The Soviets attempted to run the economy without market prices, instead relying on the intellect of Gosplan, a federal government agency that established the “correct” levels of prices, production, and wages.

For example, Gosplan determined the prices of retail goods by first calculating the total amount of money that was spent on wages and how much was ready for consumption. The agency would then use the tally and equate it to the value of all goods produced in that year according to one of their many five-year plans. By then, Gosplan believed it could establish the price of each good by primarily using the fallacious Marxian Labor Theory of Value – the value of a good or service based on “socially necessary labor.”

Goods were also classified into two categories: Group A, which was heavy industry, and Group B, which included consumer goods. The former was given top priority — this was obvious in the poor quality of products like refrigerators, washing machines, and televisions.

But what good is quality when consumers can barely even have access to these shoddy items?

Shortages of basic consumer products — food and otherwise — were prevalent. While scarcities were not as severe in major population centers, like Leningrad and Moscow, they were common in the rest of the country. You either found nothing on state-run store shelves, or you waited in long lines. If you violated the 11th commandment of communism — thou shalt not patronize a private business — you still wouldn’t have access to a fresh piece of fruit or some meat because the prices were too high or inventories were seasonal.

In 1982, The New York Times described what you would find at any number of the nation’s state-run stores:


“At noontime one day last week the meat counter was down to pitiful cuts of beef and mutton, mostly fat and bone. After a few weeks late last year when it disappeared from Moscow shops, butter was on sale again, but with a limit of 1.1 pounds per shopper. The vegetable counter boasted symmetrically arranged displays of carrots, beetroot and cabbage, but much of it was rotten.”

To alleviate the dire situation, the government instituted a rationing system, otherwise known as the “default option of Stalinist distribution.” Jurisdictions had different rules. Moscow, for example, established limits on the quantity shoppers could buy and regulated operating hours. Some cities had coupons, others imposed restrictions. To understand just how bad the food shortage was, state zoos made their animals become vegetarians.

These developments soon shifted into other areas of the Iron Curtain, including healthcare. Children could not purchase milk without a doctor’s prescription, hospital power outages were routine, and the government initiated a public awareness campaign about the dangers of overeating. Medical bureaucrats used anesthesia as a form of extortion; it was “unavailable” for surgeries, but if you paid a bribe, then it magically appeared. The infant mortality rate was so bad that the government did not count children as being born until they survived their first month.

The public finally had enough of socialism.

The Fall of the "Red Menace"

For decades, they had to live with four people in a one-room apartment, they had to live under the tyrannical boot of authoritarian leaders, they had to sacrifice themselves to the state, and, worst of all, they had to see their mortal enemy — the U.S. — enjoy the fruits of capitalism. Is it any wonder why the government surrounded radio towers with military guards and barbed wire, why security forces routinely inspected the population, and why bureaucracies ransacked offices of dissidents? The state became frightened of the people — as it always should be.

The fall of the Soviet Union is a case study in waiting for the laws of economics to destroy a nation. The U.S. did not need to invade Russia or drop bombs on Saint Petersburg to end the threat of the Red Menace. The dissolution of the U.S.S.R. was caused by failed economics and the fatal conceit of the socialists.

An old lady goes to the Gorispolkom (local authorities) with a question, but by the time she gets to the official’s office, she has forgotten the purpose of the visit. “Was it about your pension?” the official asks. “No, I get 20 rubles a month, that’s fine,” she replies. “About your apartment?” “No, I live with three people in one room of a communal apartment, I’m fine,” she replies. Suddenly she remembers: “Who invented communism – the communists or the scientists?” The official responds proudly, “Why the communists, of course!” “That’s what I thought,” the old lady says, “If the scientists had invented it, they would have tested it first on dogs!”

Andrew Moran is the Economics Correspondent at LibertyNation.com and is the author of The War on Cash. You can find more of his work at AndrewMoran.net.