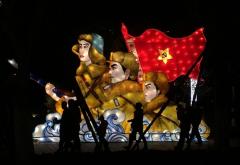 The sad truth is that socialism is the only game out there to set against  acceptance of the  pragmatic status quo.  Yes, the a so called right is actually more pragmatic then ideological.  If it is not too badly broke, you do not fix it.

Worse, it is still peddled by the academics because they know nothing else either.

You must understand something basic.  All these folks peddle the idea of theoretical completeness for Political science, Sociology and Economics.  They remain nothing of the kind until you understand how to eliminate poverty.  Because the poverty is still with us, the socialist meme is peddled on the one hand and the pragmatic rely on scant handouts on the other hand to the same effect.  All that as a cover for a grab at power.

Power itself needs to be channeled with the Rule of twelve before this all abates.

7 hours agoJeff Deist
https://mises.org/power-market/still-fighting-last-war-against-socialism
Why does support for socialism persist?

The short answer may be simple human nature, our natural tendency toward dissatisfaction with the present and unease about the future. Even in the midst of almost unimaginable material comforts made possible only by markets and entrepreneurs—both derided by socialists—we cannot manage to conclusively defeat the tired but deadly old arguments for collective ownership of capital. We're so rich that socialists imagine the material wealth all around us will continue to organize itself magically, regardless of incentives.

It's a vexing problem, and not an academic one. Millions of young people across America and the West consider socialism a viable and even noble approach to organizing society, literally unaware of the piles of bodies various socialist governments produced in the 20th century. The fast-growing Democratic Socialists of America, led by media darlings Rashida Tlaib and Alexandria Ocasio-Cortez, now enjoy cool kid status. Open socialist Bernie Sanders very nearly won the Democratic Party's 2016 nominee for president before being kneecapped by the Clinton machine. New York City mayor Bill de Blasio helpfully announces "there is plenty of money in this city, it's just in the wrong hands." He freely and enthusiastically champions confiscation and redistribution of wealth without injury to his political popularity.

How is this possible, even as markets and semi-capitalism lift millions out of poverty? Why does socialism keep cropping up, and why do many well-intentioned (and ill-intentioned) people keep falling for something so patently evil and unworkable? Why do some battles have to be fought over and over?

The Soviet Union collapsed and the Berlin War fell decades ago. The Eastern Bloc discovered western consumerism, and liked it. Bill Clinton declared the era of Big Government over, and Francis Fukuyama absurdly pronounced that Western ideology had forever won the day. Even China and Cuba eventually succumbed to pressure for greater economic freedoms, not because of any ideological shift but because it became impossible to hide the reality of capitalist wealth abroad.
Yet economic freedom and property rights are under assault today in the very Western nations that became rich because of them.

Today's socialists insist their model society would look like Sweden or Denmark; not the USSR or Nazi Germany or Venezuela. They merely want fairness and equality, free healthcare and schooling, an end to "hoarded" wealth, and so forth. And they don't always advocate for or even know the textbook definition of socialism, as professors Benjamin Powell and Robert Lawson learned by attending socialist conferences (see their new book Socialism Sucks: Two Economists Drink Their Way Through the Unfree World). In many cases young people think socialism simply means a happy world where people are taken care of.

Never mind the Scandinavian countries in question insist they are not socialist, never mind the atrocities of Stalin or Mao or Pol Pot, and never mind the overwhelming case made by Ludwig von Mises and others against central economic planning. Without private owners, without capital at risk, without prices, and especially without profit and loss signals, economies quickly become corrupted and serve only the political class. Nicolás Maduro feasts while poor Venezuelans eat dogs, but of course this isn't "real" socialism.

History and theory don't matter to socialists because they imagine society can be engineered. The old arguments and historical examples simply don't apply: even human nature is malleable, and whenever our stubborn tendencies don't comport with socialism's grand plans a "social construct" is to blame.

These most recent spasms of support for the deadly ideology of socialism remind us that progressives aren't kidding. They may not fully understand what socialism means, but they fully intend to bring it about. Single-payer health care, "free" education, wealth redistribution schemes, highly progressive income taxes, wealth taxes, gun bans, and radical curbs on fossil fuels are all on the immediate agenda. They will do this quickly if possible, incrementally if they have to (see, again, the 20th century). They will do it with or without popular support, using legislatures, courts and judges, supranational agencies,university indoctrination, friendly media, or whatever political, economic, or social tools it takes (including de-platforming and hate speech laws). This is not paranoia; all of this is openly discussed. And say what you will about progressivism, it does have a central if false ethos: egalitarianism.

Conservatives, by contrast, are not serious. They have no animating spirit. They don't much talk about liberty or property or markets or opportunity. They don't mean what they say about the Constitution, they won't do a thing to limit government, they won't touch entitlements or defense spending, they won't abolish the Department of Education or a single federal agency, they won't touch abortion laws, and they sure won't give up their own socialist impulses. Trumpism, though not conservative and thoroughly non-intellectual, drove a final stake through the barely beating heart of Right intellectualism, from the Weekly Standard to National Review. Conservatism today is incoherent, both ideologically and tactically incapable of countering the rising tide of socialism.

Generals always fight the last war, and politics is no different. We all tend to see the current political climate in terms of old and familiar divisions, long-faded alliances, and obsolete rhetoric. We all cling to the comfortable ideology and influences that help us make sense of a chaotic world. As one commenter recently put it, liberal Baby Boomers still think it's 1968 and conservative Baby Boomers still think it's 1985. Generation X and Millennials will exhibit the same blinders. It may be disheartening to keep fighting what should be a long-settled battle against socialism, but today we have no other choice.