Tempted by a 'Blue Being' 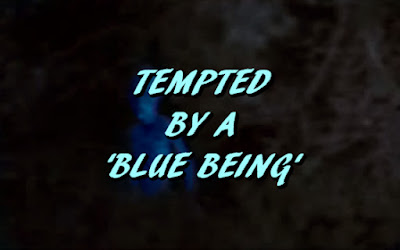 This is extremely important.  It shows us the giant sloth (three toed) projecting its spirit body as a lure and projecting real attraction as well.  We already knew that the giant sloth was responsible for a number of missing person events in the woods.  This shows us how it is accomplished.

The blue is the natural ultraviolet spectrum put our by all spirit bodies including our own and it is a beautiful color.  It is also the color of the Inner Sun and it does not damage the eyes.  Yet it needs the darkness he experienced in order to observe it.


One other observation i want to make regarding the Giant three toed Sloth.  It is a wonderful ambush hunter, but it does not appear to be a serious runner.   In several instances, the creature was discovered and the witness was in real danger of fast pursuit and ran for it.  Not once was the witness chased which strongly suggests this is way too difficult.

Tempted by a 'Blue Being'

This happened in the summer of 2016. I was at a big bonfire gathering at a place called "The Desert," a large wooded area where The Missouri River runs through it. There are sandy river beds all over the place. There's a big crazy complex path that goes thru this wooded area and all these dirt bikes fly all over there all the time. Anyway it was probably 11pm and dark. I had gone to my car to grab a smoke and decided to take a leak while I was away from the friends (oh I also want to mention I wasn't under the influence of anything as I had been asked to be the D.D. that night, which makes this encounter all that more bizarre lol).

So I heard my name called from this real dark area of that woods. I called out "Yo, I'm p*ssing, what da ya want?" No reply, so I shrug my shoulders and finish up. Then I hear my name called again, only from far opposite side of the wooded area. So I holler again. No response. I start walking into the woods (on the dirt bike path) thinking someone's screwing with me. I thought I saw something, a bright baby blue color, moving among the trees?! So I stop and hear my name called (or I should say whispered) from all around. Oddly enough I had no fear and kept walking forward toward that light thing I'd seen. I'm quite a way into the woods as I can no longer see the bonfire (and it was a huge fire) and I start seeing that blue thing again as it stepped out from behind a tree. It paused long enough for me to make out what it was. It's a glowing figure, very skinny and probably 8 feet tall (the most beautiful blue I've ever seen).

Now most people would have turned tail and ran like the wind, but this thing emitted some kind of mesmerizing 'love vibe' in which (looking back on it) I felt pulled to it and felt like I went into a trance like state. So I kept walking towards this thing and actually picked up my speed because in my mind I'm thinking "I gotta get to this figure cause I want to hug it" (like why was I thinking this is beyond me, the feeling I had running through my mind was so backwards I can't even describe it really). I'm probably like 100 feet from this thing and I can see details in it, such as definitions on its face and I can see that it has 3 (yes, 3) fingers (which at the time didn't scare me one bit). So I'm standing and looking at this thing and I start jogging towards it (yep, jogging). I then suddenly stop on a dime (metaphorically speaking) and the thought like slams into my mind that "If you take one more step toward this thing, no one will ever see you again! You'll be another statistic of people that go missing in the woods!!!" Going from an almost elated love state to sheer fear is an odd sensation.

Anyway I started backing up slowly and this being actually started taking steps towards me. Well hell,g] I thought this thing was gonna come running after me so I cruised like a marathon runner and started screaming my friends' names, the second that the bonfire came back into view through the trees. I'm very luck that the path I had chose to take was a straight shot from where I started because the rate in which I was willing to follow this thing, it easily could have drawn me into taking all kinds of pathways and gotten me quite lost in this huge wooded area of criss-crossing dirt bike tracks. When I got back to the bonfire I told everyone what happened. A few went into the area with flashlights looking for this "blue being" but to no avail. Apparently I'd been gone over an hour??!! Seriously, it seemed like 20 minutes. Anyway there is some kind of "entity" or "entities" that dwell in the woods of Kimball Bottoms...A.K.A "The Desert" in Bismarck, North Dakota. - DC