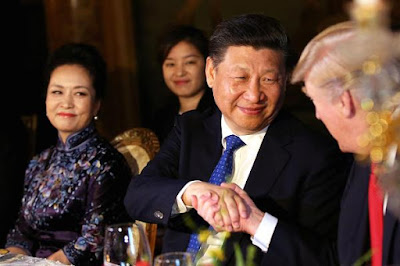 Much has now been clarified. When i posted  on Trump's arrival in China some weeks back, i noted that he was treated with the highest possible courtesy as could be laid on.  He came as the EMPEROR.  Why?

It was because the Chinese allowed Trump and Kim to meet in the Forbidden city and it was there that Kim's future options were laid out.  Because of the pomp and circumstance, the Chinese could then renege of all promises ever made to Kim.  After all the Emperor of the world was here.  This is how the Chinese saved face totally.

Kim then had to make up his mind and the minds of his government and then also work on saving face.  Thus the sudden involvement in the Seoul Olympics then and there.  And all the successive meetings.  The deal has been accepted and all this will be window dressing and stage work.  Thus we have the public meeting coming up and more appropriate stage managemnet allowing Kim to morph into a legitimate public figure in an united Korea.

Astonishingly, it appears that Trump has stage managed a solution allowing all parties to accept the inevitable. He can even take credit for it by pretending to take credit.  And understand one other thing. The Chinese know for sure that they are dealingwith a genius.

One down folks and yes, next up is Iran and that will be tougher.

President Donald Trump will meet with the dictator of North Korea, President Kim Jong-Un, according to White House press secretary Sarah Sanders. While she said that the final details have not yet been finalized, the meeting is expected to take place by May. In a statement, Sanders said, “President Trump greatly appreciates the nice words of the South Korean delegation and President Moon. He will accept the invitation to meet with Kim Jong Un at a place and time to be determined. We look forward to the denuclearization of North Korea. In the meantime, all sanctions and maximum pressure must remain.”

Trump tweeted at 8 p.m. ET on Thursday, "Kim Jong Un talked about denuclearization with the South Korean Representatives, not just a freeze. Also, no missile testing by North Korea during this period of time. Great progress being made but sanctions will remain until an agreement is reached. Meeting being planned!"

As an apparent concession by the communist state, Kim has issued a pledge to halt nuclear weapons testing even while the United States and South Korea will continue holding joint military exercises. Kim communicated with Trump by a letter that was delivered by a delegation from South Korea that visited the White House on Thursday.

The groundbreaking announcement followed an invitation from Kim through top officials from South Korea, who met Trump on Thursday. If the summit meeting takes place, Trump would become the first serving U.S. president to meet with a leader of North Korea.

Mike Cernovich 🇺🇸
✔
@Cernovich
You won't see one apology from the experts who claimed Trump was bringing us closer to war with North Korea, despite this unprecedented invitation from Kim Jong Un.

According to South Korean national security adviser Chung Eui-Yong, Kim told the South Koreans that "he is committed to denuclearization" and that North Korea will "refrain from any further nuclear or missile tests." After meeting with Trump, Chung spoke outside the White HOuse and said that Kim "expressed his eagerness to meet President Trump as soon as possible."

While Trump has expressed a willingness to talk with North Korea, the Trump administration has called on the communist nation to take concrete steps toward denuclearization. As of Thursday evening, there was no indication of any pledge on the part of North Korea.

A senior White House official indicated earlier this week that all options are on the table but the Trump administration’s policy toward North Korea will not change until concrete steps toward denuclearization are seen.

Since Trump took office, the United States has imposed some of the most far-reaching sanctions against North Korea, while also pressuring China to isolate the communist regime. In recent weeks, North Korea has fired ballistic missiles that flew near Japan’s air space, while claiming that it has the capability of striking the American homeland.

Kim Jong Un talked about denuclearization with the South Korean Representatives, not just a freeze. Also, no missile testing by North Korea during this period of time. Great progress being made but sanctions will remain until an agreement is reached. Meeting being planned!

Professor Jeffrey Lewis of the Middlebury Institute of International Studies responded to the news, "To be clear: we need to talk to North Korea. But Kim is not inviting Trump so that he can surrender North Korea's weapons. Kim is inviting Trump to demonstrate that his investment in nuclear and missile capabilities has forced the United States to treat him as an equal."
Posted by arclein at 12:00 AM