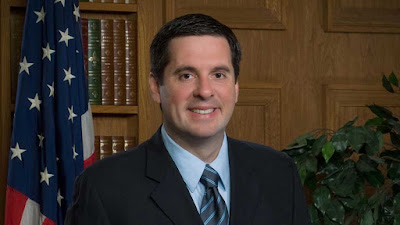 There are chaps in high office who are really holding the fort against all coercion.  They still look thin on the ground but they also have massive support from within the government itself as the opponent is only those who directly benefited from past misdeeds.  The opponents look formidable but that is only reflected power now under direct assault.

Trump has the heavy lifting but we also need legitimate successors standing in the wings and we are certainly seeing that here.

Trump set himself an incredibly high bar when he promised to drain the swamp.  In fact I thought that this would be an incremental attack at best that might make things better but hardly a revolution.  I now suspect that we are seeing a complete house cleaning been undertaken top to bottom in which sharp firefights will erupt here and there and in which whole agencies will disappear..

This is an extraordinary and highly truthful article by former CIA official Ray McGovern who was the responsible official for the daily briefing of the President of the United States. Be sure to read it:

McGovern has proven over and over on many occasions that he is a person of integrity, honor, and intelligence. Ray McGovern should be the Director of the CIA. He would be welcomed by the CIA analysts who resent their political use, and we would have an honest intelligence agency, which is what we need.

Rep. Nunes, Chairman of the House Intelligence Committee said that those in the FBI and Obama Justice (sic) Department who intentionally orchestrated false charges against the President of the United States will be put on trial, if they have violated the law, as they are no longer tolerated as being above the law. In my opinion, it is a foregone conclusion that they have violated the law of the United States of America.

Rep. Nunes, who is likely to be assassinated by the FBI, CIA, military/security complex, or DNC at any time, said that:

•The committee is closing down its investigation into possible collusion between Moscow and the Trump campaign; no evidence of collusion was found.
•The apparently widespread practice of “unmasking” the identities of Americans under surveillance. On this point, Nunes said, “In the last administration they were unmasking hundreds, and hundreds, and hundreds of Americans’ names. They were unmasking for what I would say, for lack of a better definition, were for political purposes.”
•Asked about Schiff’s criticism that Nunes behaved improperly on what he called the “midnight run to the White House,” Nunes responded that the stories were untrue. “Well, most of the time I ignore political nonsense in this town,” he said. “What I will say is that all of those stories were totally fake from the beginning.”

Adam Schiff is, in my opinion, clearly the CIA/FBI’s point man in the House. Everything Schiff says is supportive of the CIA/FBI plot against the President of the United States and the American people.

Hopefully Schiff will be in the dock with Brennan, Comey, Mueller, Clapper, Hillary and sent to prison with them.

I remember when the Democratic Party stood for the working class and justice. I remember the great justices of the US Supreme Court from the Democratic Party—William Douglas, William Brennan, and Thurgood Marshall. These were real Americans who protected Americans’ civil rights and held the corrupt government to account.

In the United States there is no one to represent the rule of law but Devin Nunes. Stand by him as he will be under heavy attack from the utterly corrupt presstitutes who never serve truth, only their pocket book enriched by their subsidies from the CI

Nunes: FBI and DOJ Perps Could Be Put on Trial

House Intelligence Committee Chair Devin Nunes has stated that “DOJ and FBI are not above the law,” and could face legal consequences for alleged abuses of the FISA court, reports Ray McGovern.

February 19, 2018 "Information Clearing House" - Throwing down the gauntlet on alleged abuse of the Foreign Intelligence Surveillance Act (FISA) by the Department of Justice and the FBI, House Intelligence Committee Chair Devin Nunes (R-Calif.) stated that there could be legal consequences for officials who may have misled the FISA court. “If they need to be put on trial, we will put them on trial,” he said. “The reason Congress exists is to oversee these agencies that we created.”

Attkisson said she had invited both Nunes and House Intelligence Committee Ranking Member Adam Schiff (D-Calif.) but that only Nunes agreed. She asked him about Schiff’s charge that Nunes’ goal was “to put the FBI and DOJ on trial.” What followed was very atypical bluntness — candor normally considered quite unacceptable in polite circles of the Washington Establishment.

Rather than play the diplomat and disavow what Schiff contended was Nunes’ goal, Nunes said, in effect, let the chips fall where they may. He unapologetically averred that, yes, a criminal trial might well be the outcome. “DOJ and FBI are not above the law,” he stated emphatically. “If they are committing abuse before a secret court getting warrants on American citizens, you’re darn right that we’re going to put them on trial.”

The stakes are very high. Current and former senior officials — and not only from DOJ and FBI, but from other agencies like the CIA and NSA, whom documents and testimony show were involved in providing faulty information to justify a FISA warrant to monitor former Trump campaign official Carter Page — may suddenly find themselves in considerable legal jeopardy. Like, felony territory.
This was not supposed to happen. Mrs. Clinton was a shoo-in, remember? Back when the FISA surveillance warrant of Page was obtained, just weeks before the November 2016 election, there seemed to be no need to hide tracks, because, even if these extracurricular activities were discovered, the perps would have looked forward to award certificates rather than legal problems under a Trump presidency.

Thus, the knives will be coming out. Mostly because the mainstream media will make a major effort – together with Schiff-mates in the Democratic Party – to marginalize Nunes, those who find themselves in jeopardy can be expected to push back strongly.

If past is precedent, they will be confident that, with their powerful allies within the FBI/DOJ/CIA “Deep State” they will be able to counter Nunes and show him and the other congressional investigation committee chairs, where the power lies. The conventional wisdom is that Nunes and the others have bit off far more than they can chew. And the odds do not favor folks, including oversight committee chairs, who buck the system.

On the other hand, the presumptive perps have not run into a chairman like Nunes in four decades, since Congressmen Lucien Nedzi (D-Mich.), Otis Pike (D-NY), and Sen. Frank Church (D-Idaho) ran tough, explosive hearings on the abuses of a previous generation deep state, including massive domestic spying revealed by quintessential investigative reporter Seymour Hersh in December 1974. (Actually, this is largely why the congressional intelligence oversight committees were later established, and why the FISA law was passed in 1978.)

At this point, one is tempted to say plus ça change, plus c’est la même chose – or the more things change, the more they stay the same – but that would be only half correct in this context. Yes, scoundrels will always take liberties with the law to spy on others. But the huge difference today is that mainstream media have no room for those who uncover government crimes and abuse. And this will be a major impediment to efforts by Nunes and other committee chairs to inform the public.

One glaring sign of the media’s unwillingness to displease corporate masters and Official Washington is the harsh reality that Hersh’s most recent explosive investigations, using his large array of government sources to explore front-burner issues, have not been able to find a home in any English-speaking newspaper or journal. In a sense, this provides what might be called a “confidence-building” factor, giving some assurance to deep-state perps that they will be able to ride this out, and that congressional committee chairs will once again learn to know their (subservient) place.

Much will depend on whether top DOJ and FBI officials can bring themselves to reverse course and give priority to the oath they took to support and defend the Constitution of the United States against all enemies foreign and domestic. This should not be too much to hope for, but it will require uncommon courage in facing up honestly to the major misdeeds appear to have occurred — and letting the chips fall where they may. Besides, it would be the right thing to do.

Nunes is projecting calm confidence that once he and Trey Gowdey (R-Tenn.), chair of the House Oversight Committee, release documentary evidence showing what their investigations have turned up, it will be hard for DOJ and FBI officials to dissimulate.

Not since Watergate has there been so high a degree of political tension here in Washington but the stakes for our Republic are even higher this time. Assuming abuse of FISA court procedures is documented and those responsible for playing fast and loose with the required justification for legal warrants are not held to account, the division of powers enshrined in the Constitution will be in peril.
A denouement of some kind can be expected in the coming months. Stay tuned.

Ray McGovern works with Tell the Word, a publishing arm of the ecumenical Church of the Savior in inner-city Washington. He was a CIA analyst for 27 years and is co-founder of Veteran Intelligence Professionals for Sanity (VIPS).

This article was originally published by "Consortiumnews"
====
The views expressed in this article are solely those of the author and do not necessarily reflect the opinions of Information Clearing House.
Posted by arclein at 12:00 AM