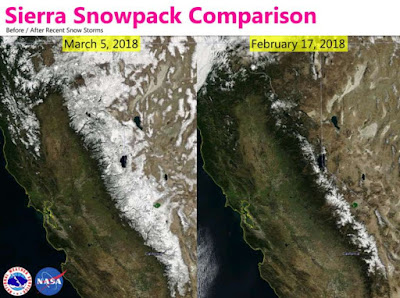 Let us observe that we have had a serious winter with ample snow pack all over and yes this will surely ameliorate ongoing drought conditions.  As i have posted before, the sun has actually cooled sufficiently to allow a global heat decline and this trend has been underway for several years now.   Thus we will see worsening winters and an end to general drought conditions generally.


The present expectation is that this will be sustained for around three decades before the sun warms up again.  How cold it might get cannot be predicted simply because we lack empirical data to safely guide us.

Globally we need to Terra-form all the deserts with atmospheric water collection  as this will also hold substantial heat as well and nicely moderate the global climate back to Bronze Age norms.
. ..


A massive snowstorm Friday in Northern California could bring the state’s lengthy drought to end while leaving two feet of snow in the mountains near Los Angeles.

The Sierra Nevada Mountains has seen two feet of snow and winds gusting over 100 miles per hour.
Forecasters are expecting seven feet of snow in some areas of the mountain range. Meanwhile, more than 22,000 Montecito residents evacuated their homes as rain continued to pound the area — California’s weather comes as a nor’easter clobbers parts of the East Coast.

“The worst of the storm has passed, and we are cautiously optimistic that due to a significant amount of pre-storm preparation we have come through this with minimal impact,” Rob Lewin, director of the Santa Barbara County Office of Emergency Management, said in a statement.

Things have not been that much better on the East Coast. A so-called bomb-cyclone condition is shaping up on the other side of the country that could be even more intense than one from earlier this year. Predictions are it could cause record flooding and intense damage and be the most intense nor’easter in 20 years, according to the National Weather Service.


“Many have asked how this event will compare to January 4,” the NWS in Boston said in a statement. “Our thinking is there will likely be more structural damage in this event given the larger waves and occurring over multiple tide cycles. Many neighborhoods will likely become isolated, some for extended periods of time.”

Experts are predicting moderate to major flooding for three tide cycles in Boston. A 3-foot storm surge is coming into the city on top of approximately 11-foot tides, flooding could set records in the city and be worse than the Jan. 4 storm.

January’s snowfall covered approximately 49 percent of the northern section of the country leading up to Christmas Day of 2017. It made a “White Christmas” for almost half of the country, not including Alaska and Hawaii.

Pennsylvania county was clobbered with 60 inches of snow in two days following Christmas. The storm shattered records and required the national guard to help keep the roads clear and residents safe.

Even after storm, California’s Sierra snowpack at 37 percent of average


The storm that wrought avalanches at ski resorts and whiteouts on mountain roads last week was so fierce that California water officials postponed their much-anticipated monthly survey of snow depth, setting the stage for potentially better news this week.

But on Monday, when officials finally lugged their gauges into the High Sierra for their periodic made-for-TV measurement, they confirmed their suspicions: The biggest storm of the winter had done little to alter the state’s swing toward renewed drought.

“No, we’re not looking OK,” said Frank Gehrke, chief of the California Cooperative Snow Surveys Program for the Department of Water Resources. “It’s a much rosier picture than a week ago, but it does illustrate the need for everyone to be prudent in their use of water.”

California’s winter has been disappointingly dry. Some parts of the state have seen less than a fifth of average precipitation since October, the usual start of the wet season. The Bay Area has received a little more than half its average.

While last winter delivered record-breaking storms that ended a historic, five-year drought, nearly 50 percent of the state has slipped back into at least moderate drought conditions, according to the U.S. Drought Monitor.
Posted by arclein at 12:00 AM