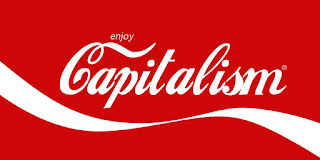 Linking product to culture is a old as the hills.  It is selling value by association.  As this item observes, the competition for such beneficial association can drive a competition that massive benefits cultural products and seriously it long has done just that.

True capitalism would make no such effort except that the consumer demands it.

As capitalism finally matures product preservation will demand the development of brand loyalty and linking that to the support of cultural product needs to deepen.

The current climate in the United States is one of a people viciously opposed to corporations as an idea while depending on individual corporations in practice for their every want and need. A century of slow indoctrination through media and higher education has made the titan of industry the obligatory antagonist in the American narrative. At the same time, American consumption habits have betrayed this conscience, with consumer spending reliably increasing (give or a take a recession or two).

One place this sentiment can be seen in reality is in the decline of brand loyalty. Some brands have been able to weather this trend by providing unique services (like Amazon) or by reliably providing access to valued content. If a moral or religious cultural shift is responsible for the abandonment of traditional brand loyalty, the relationship to content might represent where those values currently lie.

Netflix is acting as a movie and television studio as well as a distributor and medium. Youtube is curating content by providing access to both an audience and advertisers for a new kind of performer. The relationship to content of every company in the top ten for customer loyalty is obvious. Another word for the majority of this content is art. Not to say it is great art, but it is the art of this generation.

It seems to follow that energy companies, household good manufacturers, and automakers would benefit from making contributions themselves.

For the moral and religious convictions of an increasingly secular people to find their way into new forms of artistic creation and appreciation is a story much older than the American economy.

As for companies who deal in goods and services outside of the sphere of art and content creation, how should they act on this observation of shifting values? If the modern population is reserving loyalty for brands that make contributions in art and media, it seems to follow that energy companies, household good manufacturers, and automakers would benefit from making contributions themselves.
Branded — yet Authentic — Content

There is the obvious way that this can happen, with each company promoting only content closely related to its brand and valuing the relationship to the brand above the quality of the content. This varies little from traditional advertising.


There is another opportunity that is presented by increasingly diverse methods of content consumption, and the more attainable cost of producing content. Brands can become patrons of the arts at a level that has only recently been made possible by technology. There is no reason that a tire manufacturer cannot provide funding to a philosophy podcast, an online art course, a dramatic series, and a documentary film — all for the cost of one traditional high-profile advertisement.


GE has made an initial step into this potential future with the sci-fi podcast The Message. By avoiding the attractive pitfalls of using the podcast for product placement or to deliver traditional advertising, GE has enjoyed great press celebrating millions of downloads of a popular show. If people learn from this model, branded content will continue to become more subtle and organic.

This is the potential for capitalism to be the motor for cultural growth and charitable action it is capable of being.

As the public’s trust in corporations falls lower and lower, and brand loyalty inspired by traditional advertising does the same, it seems like a simple reaction to market forces for these corporations to take off the phony smile and make earnest attempts to contribute to the creation of content their customers actually value. Market research firm Forrester predicts that companies that own their values and risk losing customers by making statements will outperform companies that remain traditionally fearful of alienating any customers in 2018.

In this idea’s highest reaches of possibility, the American consumer base and American companies could learn from each other that the democracy of the marketplace offers far more impactful results than the democracy organized by the state. Consumers could gain real trust for companies that earn it from them in human ways, and business could have far more specific signals to guide operations. Perhaps philanthropic efforts by corporations would no longer be seen as cynical tax maneuvers if the brand has humanized itself with the patronage of great art and media content.

This is the potential for capitalism to be the motor for cultural growth and charitable action it is capable of being. It all starts with a little bit of trust, just as any market needs to come into existence. Even with a consumer base as skeptical as this one, that little bit of trust might still be gained with one great show.
Posted by arclein at 12:00 AM