Pangu and the Chinese Creation Story 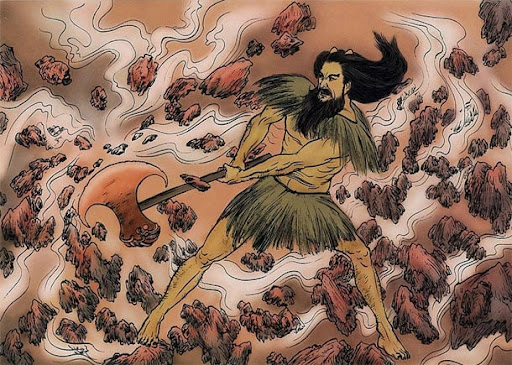 What is Chaos?  The Cosmic Egg is easier as that is what shields us from the Inner Sun.  So perceptually when I meditated and was given the gift of seeing the inner sun, it was by an obvious egg shell shattering away from the Inner Sun.

I am pretty sure that knowledge of the cosmic Egg is thus a universal experience of the spiritual and possibly is misunderstood as creation itself, though the problem of boundedness is integral to this problem..

The content of the universe is actually a chaotic assemblage of two dimensional photon strips. Opening a void allows the act of first creation and that starts an expanding sphere of particle pairs which are bounded. This conceptualization is not too far from this Atlantean legend..

Pangu and the Chinese Creation Story


Pangu is a prominent figure in Chinese creation mythology. To this day, the Zhuang people sing a traditional song about Pangu creating the Heaven and Earth. The origin of the Pangu myth has been much debated. Many believe it originated with Xu Zheng, a Chinese author from the 3rd century AD, as he was the first writer known to record it; some propose that it originated in the mythologies of the Miao or Yao people of southern China, while others see a parallel to ancient Hindu mythology of creation.

The Pangu myth follows as thus: In the beginning the universe was nothing but chaos, and the heavens and the earth were intermingled—a big black egg being commonly used as an analogy. Pangu was born inside of this egg and slept for 18,000 years, during which time the Yin and Yang balanced as he grew. When he awoke, he realized he was trapped within it. He cracked the egg and began to push it apart, essentially splitting the Yin and Yang. The upper half of the shell became the sky above him, and the lower half became the earth. The longer he held them apart, the thicker they grew and the taller he became, thus pushing them further apart—by precisely 10 feet per day. Here versions begin to change. Some claim that a turtle, a qilin, phoenix, and a dragon assisted him in this task. After another 18,000 years Pangu died, his body forming the various parts of the earth, and the parasites on his body forming humans. Another version states that he formed the earth with a chisel and hammer, while yet another version states that a goddess who later inhabited the earth formed humans.

Pangu is depicted with a turtle, phoenix, quilin, and dragon, who aided him with his task.

According to this myth, Pangu was the first supreme being and the originator of the heavens and the Earth. He is typically depicted as a dwarf—though he was actually a giant—covered in hair or bearskin or leaves, with horns fixed atop his head and either a chisel or a hammer or an egg in his hand. Other tales speak of a Pangu as a creature from heaven that had the head of a dog and the body of a man and directly accredits Pangu as the father of mankind, while another version claims he molded men from clay.

The interesting aspects of this tale are its similarities to other myths. For example, the cosmic egg is a common concept that is indicative of the universe before the Big Bang occurred, scientifically speaking. While this may, at first glance, be a very primitive way of describing such an event, one cannot help but notice how very insightful it is. How did various people with no apparent technology or knowledge of the universe, as we modern humans know it, so accurately explain what we now can? Were they made privy to this knowledge somehow?

Another interesting aspect of the tale is one of the more elusive. Some versions of the Pangu creation myth state that the giant had help from four mythical beasts. Let us take a brief look these beasts one by one. First, the turtle: the Chinese were not the only ones to use it in their creation myth; various world myths, creation and otherwise, include the turtle for its strength and immortality. The qilin, though indigenous to Asian mythology, is said to have been dragon-like. Of course, dragons are central to Asian mythology—though also found world-wide—as bearers of wisdom and a symbol of power, also connected to the succession of the early emperors. Finally, the phoenix has consistently been a symbol of rebirth. How so many cultures separated by thousands of miles came to describe such similar occurrences and use the same symbology has been a subject of much intrigue over the centuries.


Featured image: Artist's depiction of Pangu creating the heavens and earth. (orientaldiscovery.com)
Posted by arclein at 12:00 AM