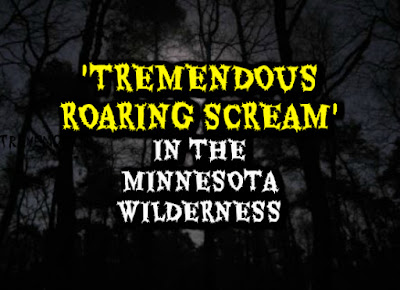 This was surely a Sasquatch showing his displeasure having guests,  The shower of twigs is typical primate behavior and this has happened before.  He got what he wanted as they left at dawn.

We have no evidence of such screams associated with the Giant Sloth/Dogman.

And of course no other animal makes that sound either.  Wha is important is that this was well witnessed and everyone changed their behavior.

“The story I am going to relate to you goes back to the 1975. I’m like eight years old and my grandfather was a scoutmaster, that means he trained Eagle Scouts. So he and a junior scoutmaster would take between 8 to 10 kids out in the woods for survival camping skills. I was known as little Sherpa, that means I would carry my grandfather's camping gear in a duffel bag.

We hiked up into a wilderness preserve somewhere up in Minnesota. It was about a five-mile hike in, and when we got there we were all very tired. The Eagle Scouts-to-be would take their survival gear which consisted of a canteen of water, a knife, a flint bar (for fire starting) and a compass. They were dispatched into several directions and ordered to walk approximately a quarter mile away from the main campsite. Once gone my grandfather and the junior scoutmaster began having a conversation talking about this and that when suddenly there was a tremendous roaring scream that came from somewhere away from where we were. The sound was, I don’t know, penetrating somehow. It seemed to come from all around us. My grandfather was a World War II vet and also an all-around tough guy, but whatever this was, I could tell it scared him. Even at eight years old I knew this was something out of the ordinary.

Suddenly, from what seemed to be all directions, these young Eagle Scouts-to-be came running back into the camp white-faced and generally freaked out. My grandfather decided that we should all stay in the main camp that particular night, and things died down for a moment or two, just kids talking wild stories etc. Suddenly a shower of rocks and twigs and branches began to shower our general campsite. My grandfather picked up one of those old-school flashlights that he had carried in with him. It must’ve had eight batteries in it, read a newspaper on the moon kind of thing, and began shining it into the general forest all around us. The junior scoutmaster joined in with his flashlight as well, but saw absolutely nothing. I do remember it being an awfully quiet night after that...dead quiet.

At what I would imagine to be around 2 o’clock in the morning we were all startled awake again by this guttural scream that seem to pass through you like the concussion of a large firework. We did not get any sleep the rest of that night, and although this was supposed to be a three-day camping trip, it ended that next morning, and yes all of the Eagle Scouts were given their credits for their survival camp.

Looking back on it many things have happened in my life that were weird, but that one will always stay with me. I have no idea what it could have been, and I’ve never heard anything even close to that awful sound. Thanks for your time.”