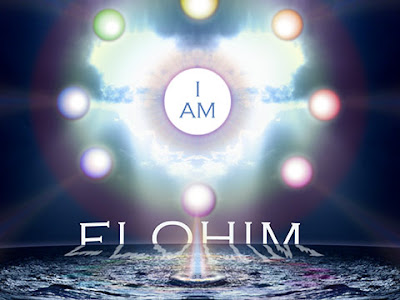 What i am sharing with you is that a number of memes are coalesing to form a critical conjecture.

Conjecture:  The Elohim reported in the Bible are those members of humanity who have achieved control or proper usage of the Inner Sun.  They were the natural leaders of humanity during pre Pleistocene Nonconformity times and a number maintained a guiding presence until the end of the Atlantean age in 1159 BC. That is why we have heard of them.

I also suspect that global governance was achieved through the rule of twelve and the Elohim were Callers and Anointers of sacred authority.

Because the respective spirit body is fully charged, it is inevitable that these individuals will glow, at least in the dark. They will also experience perfect health, and be able to heal others as well to say nothing of throwing lightening bolts.  Unsurprising they formed the Greek pantheon which was the Atlantean pantheon based in the Azores then on the real Mount Olympus which subsided in 1159 BC.  We learn there that it was possible to raise an exceptional human being into the ranks of the Elohim ( Heracles ) and that makes the Case.

Recall that the spirit body is a second tier matter construct and is physically real.  Unfortunately for us, measuring dark matter is like standing on a beach and using only two large stones in our hands, attempting to measure the size of a sand grain, the number in the beach and the scale of the beach.  By the same shift in perspective it is also clear that countability applied to the beach is different than the countability of the two stones at hand.

We conclude a true ascended master is thus an Elohim.  None have been produced for a long time.

I also note that this also explains the tradition of a halo on a holy person if you ever wondered where that came from. All this makes reading the old scriptures much easier.

Conjecture:  Successful transition to Elohim status allows the person to extend his physical third tier life for thousands of years and to accept responsibilities appropriate to those time scales.  This particularly applies to Terraforming Terra.

Consider that the task of Terraforming Terra will engage continuously 100,000,000,000 souls along with ample robotic support. Thus it appears that many need to achieve Elohim status to act as a conduit of guidance and as a health giver and plausibly the caller of the twelve.

In this way we perceive the governance of Heaven on Earth as well showing through the framework of the peoples.

I do think that it is useful for seekers to contemplate this meme..

The Nephilim of the same source are likely the Alien folk whose remains we have encountered as well.  If anything we have there an embarrassment of riches along with wall to wall institutional denial. A careful reading of all past texts is needed.  This blog alone has uncovered much.