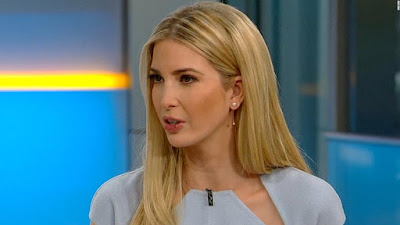 After Trump has completed his eight year program of restoration of the American Republic and also reshaped the whole global geopolitical landscape, he will step back  however, the fallout from the fifty year usurpation of electoral control by the Deep State from the time of the JFK assassination will not be easily forgotten and they will want to elect a conservator of the Trump legacy.
Certainly Ivanka fits that role as does the sons as well.  Better their loyalties can not be questioned in a time when we will all understand the power of back ground blackmail by the profoundly evil.
What i am saying is that an experienced Ivanka in eight years will be an attractive candidate.  Her father will still be on the stage as well to provide advice as well.  Thus extending the Trump mandate from 2024 trough 2030 becomes feasible.  The potential then exists for one of the sons as well to step into the position from 2030 through 2038.  By then Barron will be on the stage as well and he could be president during the forth decade. In short, Trump family in place now can be a viable candidate for the next thirty years securing the republic in the minds of the voters.
My central point is that should Trump complete the bulk of his agenda, his success will make his brand unstoppable and expecting errors from his children is wishful thinking of the most idle sort.  Better yet the best way to protect the legacy is to hold the White house and this is no Kennedy family of the endowed aristocracy with zero real world experience. The Donald's example rings loud and clear.

One throw away for you all.  I just read the last batch of Q posts again.  I do think that Q is the Donald himself.  Besides been a likely aficionado of the NYT crossword and certainly exposed to the pattern, the transmission times match his likely living schedule.  As i also can sleep less than most folks, i can identify that pattern as well.  Alternately, his son in law as a back up.  It all has to be that close because everyone else has to go home.


Ivanka Trump wants to be the first female US president. Perhaps she already is

Arwa Mahdawi
Michael Wolff’s explosive book about Donald Trump’s White House exposes the ambition of the First Daughter. But with the power she already has, why bother with a tedious election?

Ivanka Trump and Jared Kushner are quite the adorable pair, aren’t they? Their relationship is truly something to aspire to. While other couples spend their evenings eating dinner and watching TV, Javanka, it would appear, bond over intimate strategy sessions where they draw up detailed plans for world domination. According to Michael Wolff’s new book, Fire and Fury: Inside the Trump White House, Ivanka and Jared have their futures all figured out. Wolff writes that the couple have “made an earnest deal” that Ivanka will run for president before Jared. “The first woman president, Ivanka entertained, would not be Hillary Clinton; it would be Ivanka Trump.”

There has been much guffawing over Ivanka’s apparent political ambitions. Does a woman who sells strappy sandals and Instagrams motivational quotes while dabbling in an unpaid internship in the White House seriously think she deserves the highest office in the world? It’s almost as ludicrous an idea as a reality-TV star with no political experience becoming president! No chance. Republican strategist Rick Wilson told CNN, for example, that Ivanka “is much more likely to be driving a Volvo … to visit her husband in a correctional facility than she is to be president of the United States at some point”.

While I would love to think that Ivanka’s future might consist of Volvos and orange jumpsuits rather than Air Force One and the White House, I’m not so sure that will be the case. Indeed, I think the First Daughter is probably right: if there is going to be a female president of the US anytime soon, it will be Ivanka Trump. One could even argue that Ivanka is already the first female president of America. Since entering the White House in a capacity no one seems to really understand, Ivanka has made herself a fixture on the world stage. She sat in at the G20, for example, discussing African migration with the Chinese, Russian and Turkish presidents, German chancellor and Theresa May. She travelled to India to co-host a Global Entrepreneurship Summit alongside Indian prime minister Narendra Modi. She launched a fund for female entrepreneurs with the World Bank. She is basically a part-time president and now she seems to be vying for the full-time gig.


Ivanka may project a saccharine-sweet image –the doting daughter, nurturing mother, and loving wife – but she has proved herself to be more than a little ruthless when it comes to furthering her ambitions and ensuring that her brand is not tarnished by her father’s actions. Wolff’s book reports that Steve Bannon accused Ivanka, who he nicknamed “the queen of leaks”, of routinely leaking information from the White House to make herself and Jared look good. This would certainly seem to be the case. Every time Trump does something which might hurt his daughter’s reputation among the New York liberals from her social set, reports in the media from mysterious sources suddenly appear, detailing how Ivanka and Jared are valiantly working day and night to make things right. It was widely reported last year, for example, that Javanka were instrumental in stopping Trump from overturning an Obama-era order that protected LGBT rights in the workplace.

The queen of leaks’ reputation control strategy seems to have successfully stopped her brand from sinking. While Ivanka has started to draw a lot more criticism from the liberal media now than she did during Trump’s campaign, she still appears to have bipartisan appeal. A Politico/Morning Consult poll conducted last July found that 44% of US voters view Ivanka favourably. And research published by YouGov late last year found that the perception of the Ivanka Trump clothing line among consumers who vote Democrat has been moving in a continuously positive direction since late spring 2017. As Ivanka’s clothing brand is intertwined with her personal brand, that would suggest her stock among Democrats seems to be going up.

Of course, if Ivanka does run for president, it will likely be on a Republican ticket and she will have to abandon her current pretence at mild progressiveness. Just look at the UK: there is a reason the only two female prime ministers we have had have both been Tories. Electing a woman who is also liberal as leader seems to be far too much for the British establishment to handle.

In the more religious, less tolerant US, it is even more of a challenge. Hillary Clinton may have won the popular vote in 2016, but the levels of misogyny directed against her made it clear that the US establishment still finds it near-impossible to stomach the idea of a female head of state. And certainly not one who is a Democrat.

But perhaps Ivanka will not have to deal with tedious things such as democratic elections, as Clinton did. Perhaps Trump, in his typically innovative manner, will simply change the constitution and appoint Ivanka Empress of America via a 3am tweet. It’s not beyond the realm of possibility. After all, it’s still very early in an already exhausting 2018. Basically, anything could happen.
Posted by arclein at 12:00 AM