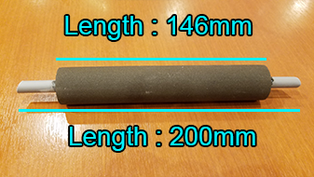 This technology provide an excellent water delivery system for irrigated row crop agriculture.  The string of pipe and water devices as shown are placed in the opened row along with plenty of sand.  When the system is charged the surface will be damp but not necessarily leaking.

The seed bed is laid on top of the sand base allowing the plant root system to drive down to the sand water interface and extract ample water.  In this water is continuously available on demand only.

Rather obviously this saves a massive amount of water.  It is a natural addition to atmospheric water systems as well were one also wants to eliminate excess evaporation.  Having a system charged underground every night works well and even allows water delivery  to be maximized during the daytime until it runs dry..

More complex devices need to be produced for trees but the same principle will apply.  Best though is that the investment can be made once and then readily maintained through a long operating life.  In the desert that may well be fifty years as there is scant problem with persuasive weed and grass choking.

I can readily imagine a fog net fence with two parallel planting bed running for miles.  Step over ten feet and set up another one and keep on going.  An excellent way to grow tomatoes and peppers and many other plants.  The incidental sand even provides ample mineralization and this is easily and safely augmenter in the desert were rain will rarely dissolve away those nutrients.

It also makes good sense to make up a tile system held together by a grid of piping that can be laid down to provide a dense seed bed.  This is clay and likely unfired as well which has always allowed seepage.. .

SEVENTY per cent of the fresh water resources are being used for agricultural production while the rest for drinking, municipal, industrial uses etc. The increasing demand for food and fibre calls for the new lands to be brought under cultivation for more crop production.


Of the total 80 per cent water losses, about 20-30 per cent is lost in the field because of deep percolation and surface evaporation when flood irrigation is used. Because of seepage from waterways and inefficient irrigation practices our productive lands on one hand have changed into unproductive saline and waterlogged soils, while on the other we are facing water scarcity.


Under such conditions, the efficient use of fresh water resources with optimum agricultural production is essential. The growing demand for water emphasises the need to develop and introduce simple, economical and easy to install, operate and maintain water saving irrigation technologies especially suitable for arid regions.


Sub-surface irrigation is used to improve irrigation uniformity and water use efficiency in a number of different cropping systems by supplying a low volume of water from below the soil surface to the crop. This method of irrigation helps in saving water by reducing evaporative and deep percolation water losses at farm level. It offers several advantages in soils not having drainage or water table problems. Proper control of application rate can also eliminate soil saturation problems. It is practiced most commonly by burying pots, pitchers, porous pipes, leaky pipes and drip lines beneath the soil surface.


This irrigation method has been practiced in various forms since ancient times. The use of plastic in micro-irrigation technology in the last century increased the use of subsurface irrigation widely. Today, this method of irrigation is being used throughout the world to irrigate field crops, vegetables, and orchards.


The installation and maintenance of sub-surface drip system is expensive and requires skilled labour for continuous monitoring and maintenance of the system. Sometimes plastic drip tubing and emitters clog when used in clay soil or if muddy water is used. Therefore, there is great need to introduce and promote traditional irrigation methods, such as pitcher and clay pipe for irrigation and water conservation particularly in water scarce areas like Thar, Cholistan and Kohistan.


The porous clay pipe is a traditional method of sub-surface irrigation in which pours clay pipes are buried in the soil at regular intervals and water is supplied continuously to these pipes from a source. Water seeps out of the porous wall of the pipe and moves radially outwards from the pipe which creates a wetting front along the length of the lateral. The geometry of wetted zone around a pipe in the soil depends on many factors such as permeability of pipe, potential surface evaporation, applied volume of water, applied pressure in the system, and the soil type.


In this system, both conveyance and seepage of the water are done instantaneously by the same pipe. This method of irrigation has been used successfully in many arid and semi-arid regions of the world. It has been found suitable for row crops grown in rows such as vegetables and trees.


Determining the water use efficiency and adoptability of sub-surface clay pipe irrigation for soils and climatic conditions of Pakistan, the system was installed on a half acre at Sindh Agriculture University, Tandojam. The soil texture was sandy loam.


Baked clay pipes, a key component of the system, were got prepared from a local potter. Required number of pieces of clay pipe, each of length 1.2 ft and 6 inch diameter with saturated hydraulic conductivity of about 0.05cm per day were prepared by the potter.


Small trenches of depth 45cm and 1.0 meter apart were excavated for burying pipes in the ground. Distance between the trenches and the depth of installation actually depends on the type of crop, soil type and properties, and climatic conditions.


To avoid any clogging of clay pipe pores, a thin layer of coarse sand (hill sand) was applied to each pipeline before burying. The laterals were installed at slopes of less than 1.2 per cent. The upper and lower surfaces of pipe lateral line were thus 30 and 45cm below the surface.


The first pipe of each lateral had opening of two inch to facilitate their joining with main line via rubber pipe while the last pipe had one closed end. The groundwater, pumped to an overhead water tank, was continuously supplied to the mainline made of steel and thereafter to the clay pipe laterals. A water meter installed at the beginning of mainline was used for measuring volume of water. A fertigation tank was also installed/attached with the main line after water meter.


Before sowing, water was applied continuously to all the laterals for four days as a soaking doze. When soil surface above the laterals became sufficiently moist, turnip seed was sown above the lateral lines. Required quantity of fertiliser was also given to the crop when needed through pipe laterals.


After 50 days to sowing, turnip was ready for harvesting. The water used for the growth of turnip was computed and compared with water needed by turnip when irrigated with flood irrigation. It was found that the clay pipe method saved about 90 per cent of water for the sandy loam soil. The turnip production obtained was 11 tons per hectare which is about 20 per cent more than that of obtained with application of conventional flood irrigation.


Scope: Out of total 79.6 million hectares, 22.1 million are cultivated (Agricultural Statistics of Pakistan, 2006). About six million hectares are rain-fed and most of them are contained in desert (Thar and Cholistan) and Kohistan. The rainfall in desert areas is recorded as low as 10mm.


The farmers in these areas collect rainwater in low laying areas called “Tarries” for domestic and limited agricultural use. The soils in these areas are usually coarse textured with high infiltration and low water holding capacity.


Therefore, each and every drop of water should be utilised wisely and judiciously for successful crop production. Under such conditions, it is wise to use and propagate high water use efficient irrigation methods. Sub-surface clay pipe irrigation being simple, locally made and easy to install, operate and maintain, can successfully be used for irrigation not only in these water scarce areas but also for irrigated areas.