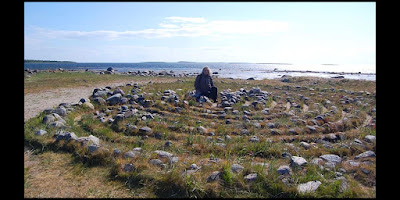 The one thing that must be clear by now is that movement across the North Atlantic has been completely feasible for tens of thousands of years.  It took special equipment to turn the North Pacific and that was possible after 20,000 BP.  However, in the North Atlantic it simply demanded open boats and fishermen.

That is important.  As well it was possible to go both ways in the North Atlantic with a modicum of sailing skill.  After all we are doing it to this day.  It is still a chance, but so what.  When you completed a days fishing and then returned to your home village to find it sacked by the local thug Tribe, you may well have had little choice.

What this also means is that those fishermen have known this for a long time if not forever.  After all, John Cabot arrived on the Grand Banks in 1505 to meet a Basque fishing fleet.  Columbus only introduced the Americas to the Crowned heads of an emerging European polity who had just consolidated their countries in living memory.  It is obvious that the sea peoples knew for a long time, and as a matter of fact from the Bronze Age on.

This information was always there but outright ignored simply because organized exploitation needed state sponsorship.  That clearly came with Columbus.

The Sami Stone Labyrnths are in region stolen from Finland during World War II by the Soviet Union.


People of One Fire member, Eric Dunn, sent us links to several articles in Russian anthropological journals, which are astounding. Links to these articles are listed at the bottom of this article. Most POOF readers, like myself, can’t read Russian, but the photos speak for themselves. I did find another Russian anthropological journal, which was translated into English. Basically, their archaeologists have discovered that the Sami once occupied a vast area of Northern Europe, but were pushed into the northern part of Scandinavia by Finnish peoples during the Late Neolithic Period and Germanic peoples in the Bronze Age. The Finnish DNA that Sami now carry is a result of admixture, not aboriginal.


These stone spirals and sun circles are a few hundred miles northwest of the region that the worlds leading geneticists at the University of København (Copenhagen) have recently identified as the “birthplace” of the hybrid peoples, some of whom became American Indians. They were the result of inter-breeding between western Asians and Pre-Indo-European occupants of Europe, probably related to the Basques.


When I first befriended genetics expert and POOF co-founder, Ric Edwards, in 2004, he had a heretical idea that would have gotten him laughed out of almost any academic conference. He believed that all indigenous Americans, except the Inuit, were the descendants of peoples, who evolved in the Americas from peoples, who migrated directly from western Russia over the Arctic Circle. He thought it was a major mistake by DNA labs to determine a person’s percentage of Native American ancestry by similarity to Siberians.


What’s the latest news? First, geologists told us that more sophisticated analysis of past climatic and geological changes had indicated that there was NEVER a direct land route from Siberia to southern Canada during the Last Ice Age. There was a vast region covering the Bering Sea and much of Alaska, which was ice free for 20,000 years during the height of the last Ice Age . . . BUT, there was no gap in the North American Ice Cap during the period when there was a land connection between Siberia and Alaska. All of the animals from the Americas such as horses and camels, who became Old World animals . . . and all the animals from the Old World, who became American animals such as mammoths, mastodons and pigs . . . crossed over a land bridge between the continents that existed a hundreds thousand years earlier. In other words . . . Homo Erectus and Denisovan Man could have walked all the way to North America, but Proto-American Indians could not have.


Then, the geneticists in Copenhagen tell us that the ancestors of Native Americans evolved in northwestern Russia from the intermarriage of Neolithic Europeans and western Asians. Their ancestors migrated from northwestern Russia then mixed in the New World to become American Indians. They were not closely kin to Eastern Siberians, Han Chinese or Japanese, but more closely related to the Ainu of Hokkaido Island, Japan and some Southeastern Asians.


Because they don’t own either globes or Muskogean dictionaries archaeology professors immediately then assumed that the proto-Americans hiked 7,000 miles eastward to cross over the land bridge rather than taking the much shorter and warmer route across Scandinavia. The problem is that there is no genetic or archaeological evidence of the indigenous Americans being in eastern Siberia. In fact, no Clovis Points have been found in Alaska. The Ice Age stone tools and weapons in ice cap-blocked Alaska look like their Siberian counterparts. The DNA of a couple of Late Ice Age skeletons in Alaska is the same as Siberian counterparts. In other words, the Siberians did wander back and forth across the dry land during the Ice Age, but there is no evidence that they ever got any farther.


A mysterious aboriginal people in Canada


Dr. Gordon Freeman of the University of Alberta believes that during the Neolithic Period the same peoples lived on both sides of the North Atlantic in Canada and Northwestern Europe. The strongest support for his theory is that “stonehenges” appeared in Alberta and some parts of eastern Canada about 500 years before they appeared in northwestern Europe. The spiral sunwheels near Hudson’s Bay and in northeastern Canada are absolutely identical to those created by the Sami.


Inuit hunters in the Canadian Arctic have long told stories about a mysterious ancient people known as the Tunit, who once inhabited the far north. Tunit men, they recalled, possessed powerful magic and were strong enough to crush the neck of a walrus and singlehandedly haul the massive carcass home over the ice. Yet the stories described the Tunit as a reticent people who kept to themselves, avoiding contact with their neighbors.


Canadian archaeologists have long assumed that the spiral stone structures were created by the earliest wave of Inuit peoples, even though the Inuit said that they were built by the Tunit. Anthropologists and archaeologists dismissed the Inuit tradition of the Tunit as laughable mythology. Four years ago geneticists found profound evidence that backed up the Inuit version of history, but strangely, none of this information has been used to revise the history textbooks that North American students are issued.


In a paper published during 2014 in Science, evolutionary geneticist, Eske Willerslev, and molecular biologist Maanasa Raghave, both of the University of Copenhagen, Denmark, revealed that the earliest inhabitants of the Canadian Arctic . . . group that Canadian archaeologists have long called the “Paleo-Eskimos” . . . lived in isolation from their neighbors for nearly 4,000 years, refraining from any mixture with Native Americans to the south or with the ancestors of the modern Inuit. They were NOT either Inuits (Paleo-Eskimos) or Native Americans. This mysterious people completely disappeared about the same time that the Greenland Scandinavian colonies disappeared, and Northwestern Europe was being ravaged by the Bubonic Plague.


“Elsewhere, as soon as people meet each other, they have sex,” says Willerslev. “Even potentially different species like Neanderthals [and modern humans] had sex, so this finding is extremely surprising.”

The new study also proposes a previously unknown migration that apparently came across the Arctic Region from Northeastern Russia. It suggests that the Paleo-Eskimos entered the Arctic some 5,000 years ago. Research by other scientists has shown that the first Americans entered the New World at least 15,500 years ago, and that two smaller migrations of hunter-gatherers followed. Unlike other indigenous peoples in the Americas, the Inuit are closely related to their cousins across the Bering Sea in Siberia.

Sami spirals and labyrinths also found in Greece and Crete


Did the Labyrinth Culture spread southward from northern Scandinavia to the northeast Mediterranean Basin or did some Mycenaean Greeks migrate to Lappland during the Neolithic Period? Sami petroglyphs are identical to those on the island of Crete. The Sami stone spirals are currently thought by archaeologists to be older than those on Crete, which identical. In fact, the Neolithic petroglyphic portrayal of labyrinths on Crete literally became the “official state seal” of Minoan Civilization during the Bronze Age. During the 5th and 6th centuries BC, the petroglyphs above appeared on coins minted at Knossos on the Island of Crete. You go figure.

A Bronze Age spiral on the island of Crete


Classic Greek literature contains stories that we all learned in elementary school about King Minos and his labyrinth, where the Minotaur monster lived. Young men and women were led, blind-folded into the center of the labyrinth. They would be killed and eaten by the Minotaur, if they didn’t figure out a path of escape.


Whatever the direction of cultural ideas and peoples between Lappland and Greece, these discoveries certainly confuse the analysis of DNA carried by indigenous peoples in the Americas, especially the Uchee of the Southeastern United States, plus the oldest ethnic groups in Peru and Ecuador. Spiral motifs appeared very early among the peoples of Georgia and Peru. There are spiral fieldstone shrines in western Peru, which are identical to those in Sami Land. There well may have been spiral stoneworks in Georgia, which were destroyed by later indigenous immigrants or by white settlers. Now you know how all those “weird DNA markers” appeared in your DNA test!


To read the articles on the Sami Stone Labyrinths in Russia, go to:


http://ttonfour.appspot.com/shemy-soloveckih-labirintov.html
Posted by arclein at 12:00 AM