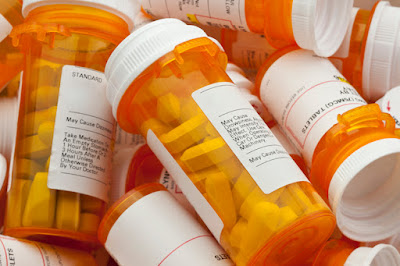 Guess what? It is not legal to do this.  All of which means that no one will ever declare that this is what is going on.  What i find way more serious is the amount of money been paid.  This is not lunch at your favorite restaurant.
The whole racket has inflated out of mind.  And if you ever needed a reason for a government exit you have just got it.  Let them rediscover what they are really worth when few buy their product.
We need a system that delivers good health and that can be built around a radically different approach that engages everyone.  I do see ways forward on this problem.  We may also start paying doctors for accumulated effort once the patient is deemed cured.

In 2010, it was found that roughly 100,000 Americans die each year from prescription drugs alone. When it comes to opioids, the number of deaths is in the tens of thousands while a quarter of patients who were given a short-term prescription transitioned to long-term use.
Now, according to a recent Harvard University analysis, doctors who prescribe these pain-killers are being paid huge sums of money from their manufacturers.
The research, which was conducted by Harvard scientists and CNN, discovered that in 2014-2015 thousands of doctors were paid over $25,000 from opioid manufacturers and hundreds more were rewarded with six-figure sums. Also, the more opioids that were prescribed, the larger the reward.

“It smells like doctors are being bribed to sell narcotics, and that’s very disturbing.” – Dr. Andrew Kolodny, Executive director of Physicians for Responsible Opioid Prescribing

The Harvard/CNN analysis found that the 5% doctors who prescribed opioids at a volume which was higher than that of the average physician were paid twice as much money from manufacturers. Likewise, doctors in the top 1% were paid four times as much.
For the top 10th of 1 percent, that number increased nine-fold. To put this in perspective, roughly 54% of doctors who wrote prescriptions to Medicare patients, which numbers more than 200,000, received payment from pharma companies which manufacture opioids.

“The correlation you found in very powerful…What’s amazing about the findings is not simply that money counts, but that more money counts even more.” – David Rothman, director of the Center on Medicine as a Profession at Columbia University College of Physicians and Surgeons

It is not legal for doctors to prescribe drugs in exchange for compensation from the drug companies, and it is also not provable that most of these doctors were paid in reward for prescribing opioids or if the prescription of opioids attracted the money from pharmaceutical companies.
However, there is nevertheless a clear financial incentive for doctors to continue to prescribe opioids, even when it isn’t in the best interest of the patient.

“It’s not proof positive, but it’s another very significant data point in the growing evidence base that marketing payments from drug companies are not good for medicine and more good for patient care.” – Dr. Daniel Carlat, former director of the Prescription Project at the Pew Charitable Trusts

The effects of opioid addiction can be extremely damaging. One patient who was prescribed a mega powerful opioid (50-100 times more powerful than morphine) known as Subsys claims that the drug placed her in a “zombie-like” state, where she would sometimes wake up on the front lawn or kitchen floor in need of more else she would experience uncontrollable vomiting and diarrhea.
When eventually asked to switch medications away from opioids, her doctor became belligerent, she claims.

“He said it was Subsys or nothing…I trusted my doctor as you trust the police officer that’s directing traffic when the light is out.” – Angela Contone

A number of patients have filed lawsuits against their doctors for prescribing opioids for the indented purpose of receiving payments and kickbacks, against the interest of the patient.
Carey Ballou, a patient who was prescribed opioids, recalls her doctor bragging about being flown across the country to lecture other doctors, all paid for by drug companies.

Carey has since filed a lawsuit against Dr. Steven Simon, who was paid over 1 million dollars by opioid companies according to the federal Open Payments database.
As more patients become aware of the way doctors prescribe opioids and to their effects, the number of patients who become addicted, or worse, will inevitably drop.

“This is the first time we’ve seen this, and it’s really important.” – Dr. Andrew Kolodny