Why are taxes so high in Sweden, Finland and Denmark? 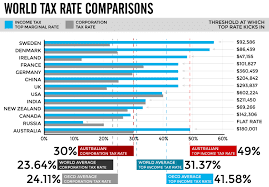 This is an important item.  The VAT is high but then Canada has a combined federal and provincial tax that comes to about fifteen percent as against Sweden's 25%.  I expect the same system to be applied in the USA sooner than later and i expect them to follow the fifteen percent level splitting it with the States and pushing medicare onto the States as was done in Canada.  It really works better all the way around.  All other countries have VAT and most are around 20% or more.

All in Sweden is no worse than  anyone else.  In fact a general drop in rates should actually expand revenues.  I would reduce VAT and Personal taxes by 1% per year and see just where revenue actually peaks and declines.  A three year decline would signal a reversal for five years. And then annual plus or minus moves around a benchmark.

The present revenue weakness in the USA is driven by a lack of a VAT which levels the playing field for American industry and the resulting American industrial decline.  All other things been equal, you will build that bicycle factory elsewhere.

The right policy going forward for the USA is to keep personal taxes low in order to collect them and to add a VAT to tax consumption.
.
Why are taxes so high in Sweden, Finland and Denmark?

Updated 28 Jun 2015 · Upvoted by Mark Rigotti, Owner of a small CPA firm with about 35 years experience in public accounting. and Ramakrishna Yellepeddi, Retired Chartered Accountant from India that has been in practice for 30 years

First of all - are the taxes that high?

The property tax as been abolished and is now a "fee" that can never be more than $900/year.
30% of all interest paid is deducted from taxes.

There is no need for medical insurance or to save up for education as all that is included in your taxes. As is elder care.

Regarding the idea of "socialist".

A lot of people do not realize that private schools here can operate under the same conditions as public schools. A school gets its funds depending on the number of students and anyone can apply to any school. So a public school that fails to attract students will lose funds that will then be transfered to the private schools that the students chose. This applies from kindergarten to university.

Basically the same system applies to health and elder care.

Very few municipalities have more than a very limited staff of their own, and everything from public transport, to school buses and garbage trucks are outsourced on public tender.

The private sector here would consider such a thing as for example american school buses "unfair competetion" and have it legally challenged.

We do have a sales tax of 25%. Higher than in most US states. BUT - it has to be included in all prices shown. A hotel or restaurant is not allowed to add "tax, service e t c" on the published.

Any business owner will balance sales tax on all business purchases (made anywhere) against that on sales, and get a refund if the paid amount his higher than that charged.

According to KPMG Corporate tax rates table the corporate tax in the US is 40% whereas it is 22% in Sweden.

So my question - are the taxes really that high - is quite relevant
Posted by arclein at 12:00 AM