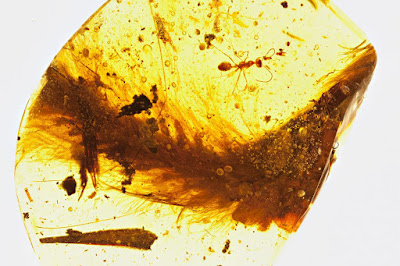 What has become fairly clear is that the transition from aquatic dinosaurs to land based dinosaurs demanded true insulation and we got this in the form of feathers.  Flying was a much later development.

The larger creatures had the body mass to do without as we observe in Africa today.  However all smaller creatures demand protection.  Thus we have the advent of fathers however evolved.  It had to have happened just in order for the family of dinosaurs to arise which makes it almost a first step.

I do suspect that the tyrannosaurus Rex is a land modified Crocodile that likely went naked and likely remained near water in order to avoid excessive heat...
.
First Dinosaur Tail Found Preserved in Amber

The tail of a 99-million-year-old dinosaur, including bones, soft tissue, and even feathers, has been found preserved in amber, according to a report published today in the journal Current Biology.

While individual dinosaur-era feathers have been found in amber, and evidence for feathered dinosaurs is captured in fossil impressions, this is the first time that scientists are able to clearly associate well-preserved feathers with a dinosaur, and in turn gain a better understanding of the evolution and structure of dinosaur feathers.

The research, led by paleontologist Lida Xing of the China University of Geosciences, was funded in part by the National Geographic Society's Expeditions Council.

The semitranslucent mid-Cretaceous amber sample, roughly the size and shape of a dried apricot, captures one of the earliest moments of differentiation between the feathers of birds of flight and the feathers of dinosaurs. (Learn more about the evolutionary relationship between dinosaurs and birds.)
Inside the lump of resin is a 1.4-inch appendage covered in delicate feathers, described as chestnut brown with a pale or white underside.

A micro-CT scan reveals the delicate feathers that cover the dinosaur tail.

CT scans and microscopic analysis of the sample revealed eight vertebrae from the middle or end of a long, thin tail that may have been originally made up of more than 25 vertebrae.

A scan of the underside of the tail shows the feather arrangement.

Based on the structure of the tail, researchers believe it belongs to a juvenile coelurosaur, part of a group of theropod dinosaurs that includes everything from tyrannosaurs to modern birds.

Feathered, but Could It Fly?

The presence of articulated tail vertebrae in the sample enabled researchers to rule out the possibility that the feathers belonged to a prehistoric bird. Modern birds and their closest Cretaceous ancestors feature a set of fused tail vertebrae called a pygostyle that enables tail feathers to move as a single unit.

"[A pygostyle] is the sort of thing you've seen if you've ever prepared a turkey," says study co-author Ryan McKellar, curator of invertebrate paleontology at Canada's Royal Saskatchewan Museum.

The dinosaur feather structure is open, flexible, and similar to modern ornamental feathers.

In a report in June of this year by the same research team, Cretaceous-era bird wings preserved in amber revealed feathers remarkably similar to the flight feathers of modern birds.

The current study concludes that if the entire length of the dinosaur tail was covered in the type of feathers seen in the sample, the dinosaur "would likely have been incapable of flight." Rather, such feathers may have served a signaling function or played a role in temperature regulation, says McKellar. (Could dinosaurs fly?)

Maybe we can find a complete dinosaur.

The weakly developed tail feathers also suggest that the owner of the Cretaceous tail falls somewhere lower down on the evolutionary tree of theropod dinosaurs, "perhaps a basal [primitive] maniraptoran," Xida suggests, referring to the subgroup of coelurosaurs that includes oviraptorosaurs and therizinosaurs. (See the oviraptorosaur that paleontologists have dubbed the "chicken from hell.")

Destined for Jewelry, but With a Silver Lining

The amber sample—formally called DIP-V-15103 and nicknamed "Eva" in honor of paleobotanist Eva Koppelhus, the wife of co-author Philip Currie—comes from a mine in the Hukawng Valley in Kachin state, northern Myanmar. Amber from this region most likely contains the world's largest variety of animal and plant life from the Cretaceous period.

It was one of more than a dozen amber samples with significant inclusions that were collected by Xing and his research team in 2015 at a well-known amber market in Myitkyina, the capital of Kachin state. Two of the other samples contained the dinosaur-era bird wings published earlier this summer.

The majority of Burmese amber is used in jewelry and carvings, and the "Eva" sample had already been subject to shaping by the time it was collected by the researchers.

The amber sample, from a mine in Myanmar, had already been partially shaped into an oval by a jewelry maker.

The modification had a silver lining, however: It offered "a nice cross section" through the tail that enabled the scientists to study the chemistry of the exposed surface, notes McKellar.

That study revealed the presence of ferrous iron, a decomposition product from the blood hemoglobin that was once present in the dinosaur's soft tissue.

"The fact that [the iron] is still present gives us a lot of hope for future analysis, to obtain other chemical information on things like pigmentation or even to identify parts of the original keratin," says McKellar. "Maybe not for this particular specimen, but for other [samples] down the road."

Meanwhile, Xing believes that the "nearing end" of a decades-old conflict between the Myanmar government and the Kachin Independence Army, which controls the Hukawng Valley, will lead to increased scientific access to the amber mines and, in, turn, to an increase in spectacular discoveries.
"Maybe we can find a complete dinosaur," he speculates, rather confidently.
Posted by arclein at 12:00 AM