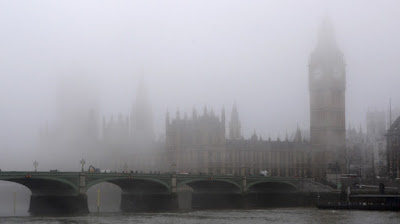 This sounds as if the stoichemistry drives the concentration of Sulfuric acid while the Nitric acid is carried off.  Thus smog slowly becomes an acid suspension which does no one any good.

This reminds us of just how dangerous this smog can be.
.

December 1952, the ‘Great Smog’ descended on London – a thick, polluted fog which made it difficult to see, and breathe.

The event prompted the 1956 Clean Air Act – but until now no one had fully understood why the fog poisoned so many..

Now researchers looking into China’s current air pollution issues may have worked it out – and Londoners may have been breathing in sulphuric acid created by burning coal.

Experiments in Xi’an and Beijing showed that sulphate can form due to interactions caused by nitrogen dioxide and sulphur dioxide – building up tiny droplets of sulphuric acid which can be inhaled.

Lead author Renyi Zhang from Texas A&M University says, ‘People have known that sulphate was a big contributor to the fog, and sulfuric acid particles were formed from sulphur dioxide released by coal-burning for residential use and power plants, and other means.

‘Our results showed that this process was facilitated by nitrogen dioxide, another co-product of coal burning, and occurred initially on natural fog. Another key aspect in the conversion of sulphur dioxide to sulphate is that it produces acidic particles, which subsequently inhibits this process.

‘Natural fog contained larger particles of several tens of micrometres in size, and the acid formed was sufficiently diluted. Evaporation of those fog particles then left smaller acidic haze particles that covered the city.’
Posted by arclein at 12:00 AM