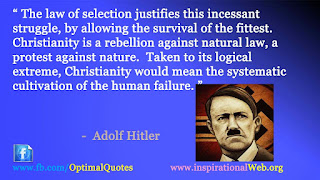 An awfully good question really.  It has been one that has always bothered me mostly because no one wished to own up.  More reasonably he was a typical secularist who drifted and never became grounded as his career skyrocketed.  More seriously he did develop a belief in the naive ideas of eugenics quite popular in his formative period and this was then attached to the anti Semitic gestalt he grew up with.

Nothing prepared him to be critical of all this and this informed his book Mein Kampf.  He was also attracted to the romantic vision of pre Christian German paganism and he obviously rejected Christianity at the least even if he then accepted nothing else.

So yes a fuzzy pantheism is suggested.  This means acceptance of a higher being and no attachment to mythology without much serious additional consideration.  He was no Buddha.

In fact we are asking the wrong question.  The man was obsessively anti Semitic in a way that no sane person can understand.  It may have been precipitated by his PTSD from the trenches.  This made him manic depressive and this was focused on this idea and he carried everyone along.

He hated Christianity because its founders were Jewish first and foremost.  If that is your intellectual starting point, it is difficult to imagine a satisfactory path forward into self inspection and self realization. ...  .

Was Hitler—and by implication his ideology and the atrocities he committed—the product of increasing secularization in society, or was he rather an example of the perils of religion run amok? This is not just a sterile academic debate, but arouses the passions of many people today. In Hitler’s Religion: The Twisted Beliefs That Drove the Third Reich, published this month by Regnery History, Richard Weikart, a professor of modern European history, argues that Hitler was a pantheist. In this interview with MercatorNet he explains why.

Why was this book necessary?

While I was working on my earlier research that related to Hitler’s ideology, I was struck by the conflicting views about Hitler’s religious beliefs. Many atheists and secularists insist Hitler was a Christian, and on that basis they blame Christianity for the Holocaust and other Nazi atrocities. On the other hand, many Christians argue that Hitler was an atheist, and thus blame atheism for all his atrocities. To further complicate the picture, many documentaries and websites claim that Hitler was a purveyor of occult religion. I wanted to clear away the confusion, and since no other professional historian had ever written a book on Hitler’s religion in the English language, I decided to fill this gap by writing Hitler’s Religion: The Twisted Beliefs That Drove the Third Reich.

Was Hitler a Christian? If not, on what grounds do people like Richard Dawkins insist that he was?

Hitler was baptized and confirmed in the Catholic Church, just like almost all Austrians in his time. After leaving home he never attended church, except for funerals and weddings. After one Catholic funeral mass that Hitler attended, Goebbels recorded in his diary that Hitler derided the Mass as superstitious nonsense.

The reason atheists like Dawkins claim Hitler was a Christian is that in some political speeches Hitler said he was. In a widely-quoted speech from April 1922, Hitler called Jesus his Lord and Savior. It never seems to cross the minds of these “skeptics” that Hitler might have been less than honest. No, sirree; Hitler said it, I believe it, and that settles it.

In Mein Kampf, Hitler explained that he and his followers should not offend the religious sensibilities of their fellow Germans, because this would result in political disaster. At various times he explained to Hess, Goebbels, and others in his entourage that he had to play the hypocrite regarding Christianity in order to gain power and retain popularity with the German public.

In private—and sometimes even in public—Hitler often bashed Christianity, and I provide abundant evidence in Hitler’s Religion that Hitler hated Christianity.

What exactly were Hitler’s views on Christianity? Did he distinguish between different types of Christianity or did he hate them all equally?

Hitler always spoke positively about Jesus, but he had a distorted view of Jesus as an Aryan, anti-Semitic fighter. His favorite Bible story was—according to his telling of it—about the idealistic Jesus wielding a whip and driving the money-grubbing, materialistic Jews out of the temple. Hitler also rejected the notion that Jesus’ death could bring salvation, and he didn’t believe Jesus did miracles or rose from the dead. Indeed, Hitler thought Paul was a conniving Jewish rabbi who hijacked Jesus’ teachings and corrupted Christianity from the start. Thus, he opposed every form of Christianity that existed after Paul’s time, since they all accepted his writings as about half of the New Testament.

Pope Benedict XVI said Hitler was an atheist. One of Hitler’s earliest collaborators, Otto Strasser, left the Nazi movement for that reason. Isn’t that a reasonable interpretation of Hitler’s beliefs?

Since Hitler spurned both Christianity and Christian morality, some assume he must have been atheistic. They think all his religious terminology must have been hypocritical. However, all the evidence suggests that Hitler did indeed believe in some kind of higher power. Both in public and in private he claimed to believe in God or Providence, and he criticized philosophical materialism.

Others, seeking to explain his power to sway people and the enormity of his crimes, have claimed he was an occultist in league with Satan. Is there any evidence for his involvement with the occult?

Some of Hitler’s closest associates, such as Rudolf Hess and Heinrich Himmler, were interested in the occult. However, Hitler spoke against their occult interests behind their back. When Hess parachuted over Britain to try to negotiate a settlement with the British, Hitler thought he had gone insane and blamed astrology for Hess’s escapade. A couple of weeks later he ordered the arrest of astrologers and prognosticators, leading to many of them being thrown into concentration camps. All Hitler’s associates testified later that he rejected astrology and occult religion.

What has led you to conclude that Hitler was a pantheist?

Pantheism believes that all of nature or the cosmos is God. As I was trying to figure out what Hitler’s religious beliefs were, I noticed that he often conflated God and nature. In Mein Kampf, for instance, he often deifies nature. This is so obvious that most translators often capitalize the word “Nature” therein. Indeed Hitler on several occasions referred to nature as eternal, which means that it was not created, but in the same passages he refers to God as a Creator. This seems rather contradictory at first, but it makes sense if you understand nature itself to be his God. For this reason, Pantheism seems the closest position to Hitler’s views.

What role did evolutionary theory play in his belief system?

Since Hitler thought that nature was God, he believed that morality was defined by conforming to nature’s laws. One of the natural laws he thought most important was the Darwinian struggle for existence, which produced evolutionary progress. Since the struggle in nature was vicious and resulted in the strong destroying the weak, Hitler considered it good and right to viciously destroy the weak. He thought this would bring about a better world with superior humans. He thought he had divine approval for annihilating the allegedly inferior races and people with disabilities.

What other cultural influences and formative experiences shaped his beliefs? Was anti-Semitism one of these, or was Hitler’s focus on the Jews quite unpredictable?

Hitler was not the disciple of any single individual, but nor was he an original thinker. All his ideas were propagated by other influential thinkers. In many cases, these were serious scholars, such as Schopenhauer or Nietzsche, and at other times they were figures on the fringe, such as the racist ideologue Joerg Lanz von Liebenfels. Hitler was very eclectic, putting together a potent ideological brew from a variety of sources.

His anti-Semitism also came from a variety of sources, including elements of traditional Catholic anti-Semitism. However, in the nineteenth century, a secular, anti-Christian version of anti-Semitism emerged that saw Jews as a race, not a religion. The secular version of anti-Semitism powerfully shaped Hitler’s vision of the Jews. Hitler thought the worst thing that could happen would be for Jews to convert to Christianity and assimilate into German society.

Hitler’s application of Darwinism to society has its equivalents today – in the eugenic trends in medicine, for example. What lessons do you draw for Christians confronting issues like abortion and euthanasia?

What I consider the most horrific thing about Nazism is its rejection of human equality and human rights, such that some people are deemed inferior, or sub-humans, or non-humans and thus can be killed without remorse. Though today we as a society (for the most part) have rightly rejected the Nazi claim that some racial groups do not deserve protection, we have relegated other groups to non-human or inferior status. In some cases, this overlaps with Nazism, because the Nazis killed people with disabilities, who are sometimes targets today.

In any case, in our society, we declare some people, such as the unborn or people with terminal illnesses or people with certain disabilities, as non-persons, or people unworthy of our protection. We have changed the categories, but mass killing is still happening. I have come to the conclusion that every society is blind to its own atrocities.
Posted by arclein at 12:00 AM