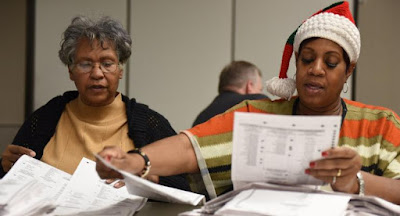 Here we go.  This was rumored to be true but we now have prima facie direct evidence that known Democrat polls were globally subjected to vote stuffing.  The excuses are specious and magically apply nowhere else.  The brakes failed!

This is absolute probable cause for a deliberate Dem program to stuff polls in Dem leaning cities in particular.

There are a dozen prospective cities in which this might be done and that means a half million votes each distributed to polls in which they are not obvious per city.  Thus we have super counts in friendly polls.

None of this survives a recount or statistical analysis.

It is completely reasonable that five million votes were stuffed.  Her support was never energized and failed to turn out while Trump's did.  Thus the huge apparent turn out in the cities made zero sense.  as stated, her popular vote majority is likely fraud..

Jill Stein's recount efforts in Michigan have uncovered what looks like systemic election fraud in Detroit, where roughly 95% of the votes cast were cast for Hillary Clinton. Sixty percent of precincts in Wayne County had to be disqualified from the statewide recount because of "irregularities." According to Fox News judicial analyst Judge Andrew Napolitano, those irregularities look "organized" and "government involved."

County records prepared at the request of The Detroit News after ballot irregularities were discovered revealed that 37 percent of Detroit precincts registered more votes than voters during the election.

Detailed reports from the office of Wayne County Clerk Cathy Garrett show optical scanners at 248 of the city’s 662 precincts, or 37 percent, tabulated more ballots than the number of voters tallied by workers in the poll books. Voting irregularities in Detroit have spurred plans for an audit by Michigan Secretary of State Ruth Johnson’s office, Elections Director Chris Thomas said Monday.The Detroit precincts are among those that couldn’t be counted during a statewide presidential recount that began last week and ended Friday following a decision by the Michigan Supreme Court.


Overall, state records show 10.6 percent of the precincts in the 22 counties that began the retabulation process couldn’t be recounted because of state law that bars recounts for unbalanced precincts or ones with broken seals.


The problems were the worst in Detroit, where discrepancies meant officials couldn’t recount votes in 392 precincts, or nearly 60 percent. And two-thirds of those precincts had too many votes.


“There’s always going to be small problems to some degree, but we didn’t expect the degree of problem we saw in Detroit. This isn’t normal,” said Krista Haroutunian, chairwoman of the Wayne County Board of Canvassers.


State officials are planning to examine about 20 Detroit precincts where ballot boxes opened during the recount had fewer ballots than poll workers had recorded on Election Day.


“We’re assuming there were (human) errors, and we will have discussions with Detroit election officials and staff in addition to reviewing the ballots,” Thomas said.


The Detroit News last week was first to report that more than half of Detroit would be ineligible for the recount because of the irregularities. The results were based on county reports obtained by The News.


The new report, compiled by Wayne County elections officials, sheds light on the extent of the problems and shows a systematic tendency toward counting more votes than the previous Wayne County report, which didn’t specify if precincts had over-counted or under-counted ballots.


Republican state senators last week called for an investigation in Wayne County, including one precinct where a Detroit ballot box contained only 50 of the 306 ballots listed in a poll book, according to an observer for Trump.


City officials have told state officials that ballots in that precinct were never taken out of a locked bin below the voting machine tabulator on Election Day, said Secretary of State spokesman Fred Woodhams.


“That’s what we’ve been told, and we’ll be wanting to verify it,” Woodhams said. “At any rate, this should not have happened.”

On Fox Business' Varney and Company Wednesday, Napolitano said that the the over-counting of Democrat votes is an example of the "government defrauding itself."

"That is a different kind of fraud," Napolitano said. "Because that is the government defrauding itself. "The poll worker is an employee of, or a volunteer in behalf of the government. You're talking about a crime now. ... The law guarantees fair elections -- not perfect ones. If this had changed the outcome, it would be unfair and it would warrant a serious inquiry."

"But it happened in 248 precincts!" Varney exclaimed. "More votes were cast than voters!"

Napolitano said that based on the massive scale of the over-counted votes, the effort was  "organized, and government involved. Government violating its own laws."

The judge said he didn't think anyone would be punished.

But they should be. There should be a serious inquiry, and those involved deserve jail time if the over-counting was found to be purposeful.

As Napolitano and Varney joked at the beginning of the segment, the results in Detroit look like they could have come from Chicago. Perhaps an audit of Cook County votes would have similar results, as would audits in Baltimore, Philadelphia, St, Louis, and many other Democrat-controlled big city precincts.

Last week it was also discovered (thanks to Jill Stein's recount effort) that over 18,000 voters in Michigan cast ballots without identification last month, prompting the state House of Representatives to pass a voter ID bill during its lame duck session.

The Democrats keep crowing that Hillary Clinton won the popular vote, but I strongly suspect that she only did so with the help of systemic voter- and election-fraud strategies in major cities.
Posted by arclein at 12:00 AM