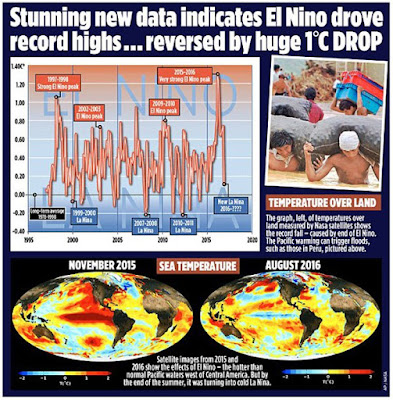 The temperature surge of the past two years has now collapsed and it is all part of a super El Nino.  Claims of a fresh beginning to global warming turn out tho be wishful thinking.

What has been ignored since 1998 is that the global temperature has flat lined.  That is 18 years during which surely as much CO2 entered the atmosphere as had for the previous century.  This actually disproves the linkage hypothesis.

Once you get past that outright scientific lie you are talking about the weather and no more.

The debate on Man-made Climate Change, aka Anthropogenic Global Warming, has been raging for a couple decades now.

The establishment media has told us repeatedly in recent years that there is consensus among 97% of climate scientists that global warming is real, and that it is caused by human activity. For many people, this appeal to authority has been convincing, and they lash out at any opposition calling them ‘climate-deniers’ or worse.

Recent data has emerged that casts major doubt on the general consensus. So how could 97% of the world’s climate experts get something like this wrong?

Most people assume that the scientific community acts purely in a non-biased way, using methods that have been standardized across the board. So much faith has been put into establishment science, especially by the left, that to question any of the findings is akin to heresy.

Unfortunately, government-funded science is not infallible, and does not always follow the same methodology. Different studies can produce wildly different results, and discoveries previously thought to be inarguable are often revealed to be false after new information comes to light.

When it comes to man-made climate change, we must factor in that the issue has been incredibly politicized. When you mix divisive politics and government funding in with science, you can expect that the findings will not always be accurate.

So what happens when vast swaths of the scientific community are wholly supported by government funding? Their positions are influenced. The money they receive comes with strings attached. And if their findings go against what the sponsors want, they can either bury the study or send it back for further evaluation.

With the issue of climate change, the incredible amount of money and power at stake also plays into the equation. From the earliest days of research on the “Greenhouse Effect”, there have been profound implications for the global economy, and particularly for the nations deemed to be the worst polluters. The idea of financially penalizing industrialized nations, through carbon credits and other schemes, has been part of the global warming cause since the beginning.

The new data that has emerged from NASA satellite measurements, tells us that mainstream science may have gotten this issue totally wrong. What they have reported as human-caused climate change could actually turn out to be just the effects of one of the strongest El Nino systems we’ve seen in decades.

How does El Nino affect global temperatures? This video by the World Meteorological Organization offers a clear explanation:

Powerful El Nino system have a major effect on weather around the world, increasing temperatures to higher than normal. The 2015/2016 El Nino cycle has been one of the strongest on record, causing ocean waters to heat by as much as 3 degrees Celsius.

When these temperature increases were measured by climate change scientists, they attributed them to the fact that global warming has resumed, after a long hiatus. Yes, that’s right, global warming has been on a “hiatus” for roughly the past fifteen years.

From 1998 to 2013, global temperatures were relatively stable, with no major increases measured. The models developed by the experts in the field had failed, casting doubt on their methodologies. The response from the mainstream scientific community was to develop new models, and introduce new variables, in order to generate an explanation for the slowdown.

When you dig into the numerous reports on the matter you find that there are many different data sets being used by climate scientists, all providing different results. In light of this fact its difficult to see how 97% of them can agree on anything!

The situation brings to mind the quote by Nobel Laureate Ronald Coase:

“If you torture the data long enough, it will confess to anything.”

Indeed the temperatures have gone higher for the past couple years, even breaking records in some locations. But there is disagreement over the cause. Global warming advocates insist that the increases are due to the long-term warming trend. Opponents say that the increases were caused by the Super El Nino that lasted until mid-2016.

The new data from NASA satellites shows a cool down of one degree Celsius, which is a huge drop. If current trends hold, we should see the average temperatures continuing to fall over the next couple years, as the effects of El Nino fade.

The overall take from the conflicting data is that the science is anything but conclusive. There are numerous expert arguments on both sides, and it’s very difficult for a laymen to make any sense of it. What we do know for certain is that the earth’s temperature has always varied since the dawn of time. The main argument is whether the more recent fluctuations are caused by human activity or not.

When government and media sources tell us that the issue is an open-and-shut case, that consensus has been reached, and that there’s no longer any doubt about man-made global warming, they are being dishonest.

So what’s in it for them?

We have watched as globalist forces have sought to consolidate their power over the past decade or more. One of the most surefire ways to control a nation’s economy is to control its energy supply and industrial output. In the hands of powerful globalists, the distorted findings on climate change will be used to enact special controls over all aspects of society.

In other words, the global warming scare is an ideal weapon for globalists and communists. It provides them an excuse to cripple economies that pose a threat while artificially boosting others. It gives them power to control movement and industry at every level.

It’s reminiscent of the way that ancient Mayan leaders took advantage of well known solar cycles in order to trick their subjects into thinking they were so powerful that they controlled the weather. The Mel Gibson film Apocalypto provides great insight into this scheme. The astronomers were able to predict a solar eclipse down to the minute, and the kings would display their magic by “causing the sun to go dark”.

Whether global warming turns out to be one of the greatest hoaxes of our time remains to be seen. But the proposed solutions so far have involved handicapping Western nations and stifling economic growth. Any lasting solution for environmental problems needs to take into account human economic needs as well, or it will be doomed to failure.
Posted by arclein at 12:00 AM

Please don't be a shill for Big Oil and Big Coal - only the unscientific illiterati would fall for this one. As the article itself states, "With the issue of climate change, the incredible amount of money and power at stake also plays into the equation."

Guess whose money and power? That of environmentalists? Greenies?

To see how the media's been gulled by psyops projected from the fossil fuel lords please see http://nexusilluminati.blogspot.com/search/label/climate%20change%20denial - and see 'older posts' at the end of each section

Chances are we'll probably be in an Ice Age in another generation, but you wouldn't want to side with today's barbarians - would you?

AGW deniers are dumber than plants: Dumber than almost all living things since living things absorb information from their environment and learn from it --- or die / go extinct.

Ps: that Pause / 16 years of global cooling was all based on???? wait for it... the 1998 El Nino. Which, I notice got exactly no mention in this article. You just say that temps were constant since then. Except you provide no evidence. And almost all glaciers are melting, And the ocean is getting warmer. and... and ... and...

:) "Government tells us it's an open and shut case."
Perhaps that is the best indication of all that we are looking at comedy relief rather than any semblance of reality. The 'conspiracy theorist' epithet for people looking at patterns of promotion is a perfect example. It literally means to look at the facts and figure out WTF is going on. To say that is a dubious proposition has to be the most outrageous jest of all - and a simple demonstration of The Big Lie. I note that both the founder and second director of the Climate Research Unit in East Anglia - site of Climategate - were derided as 'deniers'. Is a better case for media control lying as policy be possible ? Forecasting the future as if it were established is an unbelievable con itself : calling it scientific in the face of inevitable zero data just confirms that truth is the real casualty of 'denierism' of natural change continuing to dominate events.