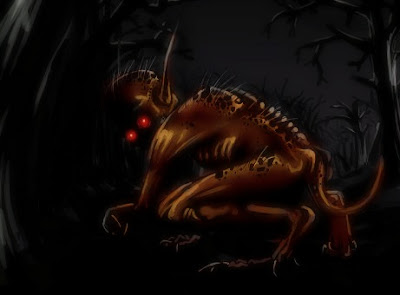 We have had tentative observations but this is the first well lit eye ball that got an excellent impression.  What we have is a gargoyle.  We also know that it can fly, but this sighting tells us quite a lot.  It is not likely capable of a jump into flight type movement.  Instead it ran on confrontation into cover.  There was no high roof available for it to jump onto.

Instead of normal flight it augments gliding by flapping.  From the sculptures produced in Medieval times we can see strong arms not directly attached to the wings along with no obvious musculature there.  That suggests that those arms can reach back to extend a wing spine complex to produce a gliding wing.  The sculptors had at least one example to work from and the detail is remarkable in the best sculptures.

All that supports a gliding launch from a high point as optimal.

A flock of these creatures could easily descend upon a cow and quickly drain it and devour soft tissues as well.
.

I was RV camping with my Irish Wolfhound, Marty last summer. We were in an old camping ground outside of Naples, Florida. Marty wanted out around 10 pm that night. Not long after I let him out I heard a loud yelping from the swamp. I immediately flooded the area with my handheld spotlight, calling out to Marty. That's when I saw an unusual creature, with eyes that glowed brilliant orange. The creature was yellowish-brown, 2 1/2 feet tall, bipedal, with several foot-long spines on the back. It was hunched over Marty, sucking blood out of of his neck. It screeched at me, and ran off. Marty's neck had two fang marks as he laid lifeless. I heard another scream nearby, so I picked up Marty's body and headed home to the 24-hr vet. The vet said he had never seen this before, and confirmed that Marty had been drained of blood. He mentioned el Chupacabras, from his home in Puerto Rico, but said he had never seen one and thought is was a myth. Colin 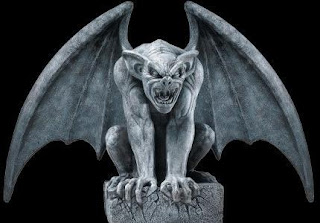