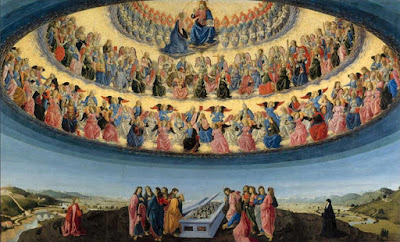 What i am sure of is that angels communicate mind to mind.  At that point your mind translates it into your language allowing you understanding.  This does not exclude a natural language preferred by the spirit world.  A comment made here seems to associate some of this material with the speaking of tongues and it is quite plausible that the spirit world xcould babble on in its own natural language.

At the least this  opens a promising line of inquiry which no one has understood for four centuries.  who would have thought?

I note that this script is easy to print which made up scripts are typically not.  I may well follow up on this and see what may be discovered.  Channeling a Rosetta stone for this should be possible.
.

In the year 1581, occultists John Dee and Edward Kelley, claimed to have received communications from angels, who provided them with the foundations of a language with which to communicate with ‘the other side’. This ‘angelic’ language contained its own alphabet, grammar and syntax, which they wrote down in journals. The new language was called "Enochian" and comes from John Dee's assertion that the Biblical Patriarch Enoch had been the last human to know the language.

Dr. John Dee, 1527-1609, was an occultist, mathematician, astronomer and astrologer who lived in Mort Lake, West London for most of his life. An educated man who studied at St. John’s College in Cambridge, was eventually accepted into influential circles of the ruling elite and acted as scientific advisor and confidant to Queen Elizabeth I. He is associated with coining the phrase ‘British Empire’. During the early part of his life, Dee had little interest in the supernatural. Later on, he became disillusioned with science and began experimenting with the occult. Dee was looking to discover lost spiritual knowledge and recover the wisdom he believed was hidden in books of antiquity. Among these books was the then-fabled Book of Enoch, which he conceived as being a book describing the magic system used by the Patriarch in the Bible.

Portrait of John Dee painted during the 17th century by an unknown artist. It is taken from the National Maritime Museum at Greenwich. 1609 (Wikimedia Commons)

The term Enochian comes from the Biblical figure Enoch, who was a source of hidden mystical knowledge and was taken up to heaven. According to Genesis 5:24, he “walked with God” and Hebrews 11:5 states that he “was taken from this life, so that he did not experience death.”

From 1581 to 1585, Dee began performing a long series of magical events. In 1581, at the age of 54, Dee wrote in his personal journal that God had sent “Good Angels” to communicate directly with mankind. By 1582, he was collaborating with fellow occultist and seer Edward Kelley (1555–1597) to communicate with these angels. Hundreds of spirit conversations were recorded, including what they claimed was an angelic language called Enochian, composed of non-English letters. The Enochian Alphabet was revealed to Dr. John Dee and Edward Kelley during “scrying sessions”, when various texts and tables were received from angels. Scrying is a technique used by seers, psychics, and sorcerers to foretell the future and involves gazing into a reflective surface to receive messages.

It is documented that Dee and Kelley used certain objects such as a black obsidian mirror and a crystal ball to experience these visions. Dee acted as orator, directing prayers to God and the Archangels for 15 minutes to an hour. Then a scrying stone was placed on a table, and the angels were called to manifest themselves. Dee and Kelly would watch the stone and record everything they saw and heard. They were told by the angels that the magic would give superhuman powers to its practitioners, change the political structure of Europe, and herald the coming of the Apocalypse. Dee believed that what he was doing would be of benefit to posterity and documented the information into a series of manuscripts and workbooks. He never described the language used during the sessions as “Enochian” but preferred to call it “Angelical,” the “Celestial Speech,” the “First Language of God-Christ,” and particularly “Adamical,” because he asserted it was used by Adam in the Garden of Eden to name all of God’s creatures.

There are two different versions of the Enochian Alphabet with one script slightly different from other. The first version is found in Dee’s Manuscript, the first five Books of the Mysteries, and the second, and generally more accepted version, is in Liber Loagaeth, the latter being Kelley’s original drawings. The script is written from right to left, and may include accents. The Enochian letters have English letter equivalents with some of the letter names pronounced as they would be in English, but many are pronounced differently. The alphabet is used in the practice of Enochian Magic on Angelical or Enochian Keys. They were received through Edward Kelley in 1584, in Krakow, Poland. That year he wrote into his diaries a series of nineteen magical incantations. The Keys comprise 48 poetic verses and correspond to various functions within the Enochian Magic system. They are given in the original Enochian Language, and a Modern English Translation, based on John Dee’s Old English versions.

The Enochian letters are read from right to left, they have letter forms, letter names and some English equivalents. They are as written from John Dee’s Diary. (Wikipedia.org)

Due to the loss of parts of John Dee’s original manuscripts, interpretations have arisen regarding the meaning, validity, and authenticity behind the Enochian language. Some magicians have asserted it is the oldest language in the world, predating all other human languages. In some circles it is considered among the most powerful strains of magic and is a method of contacting intelligences from other dimensions. Detractors have pointed out that the syntax of Enochian bears a strong resemblance to English, Dee and Kelley’s natural language. Such similarities include the word luciftias, a term meaning “brightness,” which bears a connection to Lucifer, whose name means Light Bringer.” Londoh, the Enochian word for kingdom, might just represent Dee’s connection to his royal patron, the Queen of England. Computer analysis have also shown Enochian to have a grammatical relationship to English. Texts in the Liber Loagaeth demonstrate phonetic features that do not appear in natural languages. The phonetic features are associated more with glossolalia, or speaking in tongues.

Necromancy: The art of conjuring the dead and communicating with them, image of John Dee and
Edward Kelley. From Astrology (1806) by Ebenezer Sibly. (Wikipedia.org)

Modern day occultists have found it difficult to reconstruct the Enochian system, although progress has been made by studying the original manuscripts found in Sir Hans Sloane collection. From these studies, various groups and authors have created a functional system of magic. The Enochian language was picked up and popularized by occultists, such as the Hermetic Order of the Golden Dawn, Aleister Crowley, Israel Regardie and Anton LaVey, founder of the church of Satan. Many Satanists have even included Enochian Keys in their rituals, some adopting the entire language for use. The Enochian language was also studied by U.S. rocket scientist Jack Parson of the O.T.O. In 1994 the Enochian letters were used as glyphs to operate the arc angle in the film 'Stargate', one year before the US remote viewing program, 'Stargate', was made public. Another aspect of modern Enochian magic is Enochian chess. It is both a game and a divination tool, derived from the original tablets of John Dee. It is a complex system that requires a strong foundation in the study of the Qabalah, Geomancy, Tarot, Alchemy, and Astrology. Many of the original items used by Dee and Kelley can be found in the British Museum in London, England.

Featured Image: The painting of the three orders of the Angelic Hierarchy in all their glory: “Assumption of the Virgin” by Botticini, 1475. (manyheadedmonster.wordpress.com)