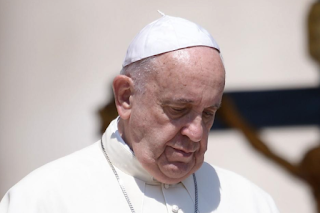 Cultural conditions have radically changed making the issues surrounding marriage and divorce far more fraught.  The developed world is engaged on a huge experiment in terms of marriage and family that is actually not going so wonderfully.

The original dispensation had many similar flaws but those were at least contained.  An early bad decision became a lifetime sentence.  Yet a third of our population forgo community support that should be a natural basis of the marriage bond.  There is no evidence that this is a good idea.

i think that the wisest course is the one we have of leaving it ti the individual conscience of a priest.  Never perfect but it does allow for most to come back into communion with the church.
.

The Pope has stirred controversy among Catholics over an exhortation entitled “The Joy of Love”(a.k.a. Amoris Laetitia), which ensued after two worldwide meetings by Catholic bishops. In the interview with Tertio, the pontiff said, “It is interesting that all that (the document) contains, it was approved in the Synod by more than two-thirds of the fathers. And this is a guarantee.”

Some Catholics have voiced concern that the exhortation has had the effect of causing confusion over the Church’s doctrine regarding the indissolubility of marriage. Their concerns have largely taken form in an open letter sent to Francis by four cardinals who asked Francis to clarify his position. The pontiff has pointedly refused to answer so far. A recent article in the liberal National Catholic Reporter suggested that the Pope is thus allowing the four cardinals -- one of whom is Cardinal Raymond Burke of St. Louis -- to reconsider their position on the reception of the Eucharist by couples who have remarried civilly but without resorting the Catholic sacrament of marriage.

Father Mark Drew, writing in the UK-based Catholic Herald, wrote of the conflict between the Pope and his cardinals that “The Church is now in uncharted territory.”

The exhortation and the five doubts or “dubia” raised by the cardinals in their letter, wrote Drew, have highlighted divisions between bishops nationally and regionally. For instance, Archbishop Charles Chaput of Philadelphia issued a directive to his priests making clear his position on marriage and the reception of the Eucharist by those in irregular unions. For Chaput, the norms concerning marriage and reception of the Eucharist are unchanged. Cardinal Kevin Farrell, an American who heads a new Vatican bureau that oversees family issues, criticized his compatriot for not acting collegially with fellow American bishops. Farrell appeared to say that the American bishops would favor Francis’s favored “option of mercy.” Amoris Laetitia, he said, was the Holy Spirit speaking.

The bishops of Germany appear to favor liberalizing Church discipline regarding marriage, while the Poles insist everything has remained the same. In the Pope’s native Argentina, where church attendance is quite low, his compatriots issued a document that suggests that remarried couples may now receive the Eucharist. The Pope responded in a private letter that their interpretation is correct.
The letter expressing the four cardinals’ “dubia,” amounted to a “bombshell,” Drew wrote. Including Cardinal Burke, the other members of the group are known to be traditionalists regarding both marriage and reception of the Eucharist. They are: Carlo Caffarra, Archbishop Emeritus of Bologna and a distinguished moral theologian; Walter Brandmüller, a highly respected academic historian; and Joachim Meisner, former Archbishop of Cologne and a well-known supporter of the last two popes.

The dubia referred to the teachings of the revered John Paul II, and suggested that there are difficulties in reconciling Amoris Laetitia with established Catholic doctrine. Drew said that the questions “present the Pope, or those liberalising theologians he seems to favour, with an opportunity to develop, with concrete and precise reasoning, their assertion that what is underway constitutes an authentic development of doctrine.”

Adding sauce to the controversy, Burke has stated that the four cardinals may issue a “formal act of correction” if the Pope did not clarify his teaching. Drew wrote, “The clear implication is that the Holy Father is possibly teaching error.”

“The Pope is in a difficult position,” Drew suggested. If Francis were to contradict principles espoused by John Paul II, Drew said that huge controversy would ensue over the disavowal. At risk is a revolt by traditionalists who favor the doctrines taught by John Paul II and Benedict XVI, but would also assail centuries-old Catholic tradition. “It might even provoke a formal schism.”

Bai Macfarlane, a columnist for Spero News and the founder of Mary’s Advocates -- a pro-marriage group -- commented on the controversy. A divorced Catholic, she nevertheless has not remarried and has served as an outspoken advocate of traditional Catholic teachings. In response to an email from Spero News, she wrote:

“The controversy in the Vatican over the five dubia spurred, in part, about the question for those in so-called second marriages, is indicative of a bigger problem that has been present for decades. The Church has disregarded her own procedural law designed to protect innocent spouses and children from marital abandonment and ignored her own procedural law on preventing scandal when professed-Catholics cause harm by their objectively sinful actions.

“Church tradition upholds the indissolubility of marriage, and upholds the obligation of spouses to work together to maintain a common home with each other and for their children. A hundred years ago, the civil state courts had the same understanding, and marital abandoners were expected to repair the damage they caused. With civil no-fault divorce, this has all turned upside down. Now, marital abandoners are routinely empowered by the civil court to take the children away from the morally-grounded spouse; and the morally-grounded spouse (who is counting on the other to uphold marriage promises) is court-ordered to pay support to the one abandoning who takes the children. Children are expected to live between two households, even if psychological science shows this is harmful to the children’s upbringing.

“It is dumfounding to me that high-powered clerics are so interested in making sure that those in second unions can get Holy Communion, while the Church ignores what happens during the breakup of the original true marriage. Mary’s Advocates, the non-profit organization I direct, teaches morally-grounded spouses how to petition the Church to try to stop a marriage breakup in the first place, or at least prevent scandal when one hardens his heart and forces a no-fault divorce on his own family.”
Posted by arclein at 12:00 AM

The current problems do seem to revolve around the practice of micromanagement. It is a reminder both of the situation which caused England to create Queen's Counsel when legislation had proliferated to the extent that people could not be expected to know the law. Surely this is also the foundation for the story of Jesus as a morality tale.