Uniquely Talented: Only the Democrats Could Have Lost to Trump 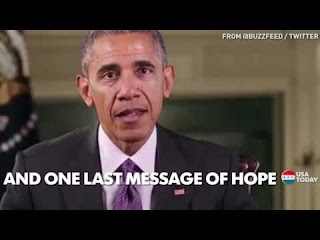 The democrats used to be the party of the working people or so they claimed.  Turned out that the Donald lifted their base in no uncertain terms.  I do understand that the privileged Republicans will have a hard time accepting their new members but they deserve the Angst.  However as the Donald so well knew, they also have no where else to go.  That is why his hostile takeover worked so well.

He then focused on phase two and stole the Dems Rust Belt base.  What amazes me is how blind they were to all of it.  I did not figure it out right away but it had to be pretty obvious to a political operator long before election night.  It certainly was obvious to Bill Clinton.  And by now everyone should know that polls are a mugs game that can be horribly misleading.

The program for the next election will be even more deadly for the Dems.  Trump will have track record of both getting things done and picking plenty of fights on behalf of the people and will be seen as such.

He will powerfully target both the Black and the Latino vote and end up pulling several more points of support. This will produce a crushing landslide.

Worse for the Dems is that they must completely reinvent themselves and quickly and that is unlikely. There is a minority audience for the socialist dream that has no where to go. Yet they have given up the whole working class to allow the Donald to work his magic, just when the economy is ready to go with him.  Firing the entire leadership might be a good start.

The only real comparable is FDR in 1932.  A whole generation supported him for twenty years and no one altered his policies for a long time thereafter..

Uniquely Talented: Only the Democrats Could Have Lost to Trump

A great uproar goes forth from the enemies of the Trump Beast, with much gnashing of hair and pulling of teeth. He will be a terrible President, they say, and they may well be right. There are ominous signs, particularly as regards foreign policy, and he seems radically incoherent and contradictory. Interestingly, his critics have no slight idea why he won. The reason is obvious: He won because everybody was campaigning for him, in particular, the media, Hillary, Black Lives Matter, Obama, Democrats, and far leftists. Everybody worked for Trump. He couldn’t lose.

The election was a referendum on Marie Antoinette’s court. It was the revolt of the unnoticed downtrodden, the financially sinking, the working classes rising against privileged snots–but it was engineered by the elites. The glittering elect, of course, did not say “working class,” this being a loaded phrase redolent of Marxism and of the Democratic Party of five decades back before it became a royal court. They spoke instead of disgruntled white men, racists, homophobes, sexists, and the Islamo nauseated–phobic, I meant.

The rich and powerful are on display in Washington, white, well paid, secure, above average in intelligence, often from Oberlin, Amherst, Swarthmore, Yale. The better sorts of schools, you know. They cluster in Washington’s posh barrios of Bethesda, Upper Connecticut, Cap Hill, and Great Falls. They drink together and talk to each other and believe that they must be right because everyone they know agrees with them.

Theirs is not a personal arrogance–they are nice people and you would like them–but an arrogance of class. Since nobody tells them they are either arrogant or a class, they do not know. Since everybody around them lives at a high standard, it does not occur to them that they live at a high standard. They exist in a small mental box.

They do not know that that in the bleak downscale strip development of Jeff Davis Highway, a half-hour away, reeking of exhaust and blowing with trash, an aged veteran on crutches lives in a dismal residential motel. Every morning he hobbles to Dixie Lee’s Diner–I forget its actual name–for a cheap breakfast because it is all he has. Or ever will. He is waiting to die. The elite doesn’t know, and wouldn’t care.

The upper crust is also moral frauds, though they do not know this either. Nice liberals to the roots of their teeth, in principle they believe that we should all love each other, and they hate anyone who doesn’t. In practice, they approximate George Wallace. Ask when they last went to the ghetto for dinner, whether they have ever been in a restaurant with a majority black clientele, whether they would send their precious children to the public schools of New York. Ask whether they have a blue-collar friend.

The privileged worked hard for Trump. Every time they described his people as uneducated white males, implicit dregs, they drove votes to Donald. And they so described the working class unceasingly.

It made him President. Good, bad, or indifferent, it is how he got in.

The privileged denigrated all whites unlike themselves. Then Hillary made her “deplorables” speech, confirming her contempt for half of America–those uneducated, shapeless, dull-witted proles in Flyover Land, obese, farting, and belching, swilling Bud, watching NASCARfor god’s sake in awful trailers. And why not sneer at them? Why did Hillary need their votes? Did not Rachel Maddow love her?

For Trump, it was gold, pure gold. If he had written her speech, he could not have come up with a better line to destroy her. It was the purest product of the establishment’s hubris. She did it to herself. Sweet.

It made him President.

Black Lives Matter also did yeoman work for the Donald. As they and snowflake Brown Shirts and excited millennials blocked highways and beat Trump’s supporters and shut down rallies, and vandalized cars, and of course looted, they presumably thought they were working against the Trump Monster. Not a chance. Out there in the uncharted barbarian lands between Manhattan and Hollywood, in dark primeval forests where Cro-Magnons are still a rarity, people were sick of lawlessness, and of an establishment that tolerated it. It produced more votes, perhaps not for Trump or even against Hillary but against the class that she represented.

Immigration. Here Hillary and Obama did great work for Donald. As Obama frantically brought in as many “refugees” as possible from everywhere, anywhere that might not be compatible with the people upon whom he would force them, Hillary promised to import huge numbers of Muslims. It was luminously stupid politics, but politically she was luminously stupid, so it fit.

She knew that the backward peoples of Flyover Land ought to want hundreds of thousands of Somalis and Pakistanis and who-knew-what to live with, and if they didn’t, she would force them and it didn’t matter because she had big donors and everybody in the media loved her.

However incoherent and ignorant Trump was, the Establishment was determined to elect him. Elect him it did.

Then there is the insularity of the privileged. Its extent is hard to grasp. It worked mightily for the new President. Hillary has probably never been in a Legion hall with, god, that kind of people; if she had, she might be President. Instead, she set a trotline for big donors and hung with the rich. They told her, didn’t they, that she couldn’t lose.

These, like her, knew nothing of the lives of most Americans. Has Bill Kristol hitchhiked in the chill of three a.m. on a secondary road in Appalachia, total wealth twenty-five dollars, hoping sparse traffic would get him to Roanoke? I am accepting bets. I doubt that Katie Couric, or any of the babbling bubble heads, has ever worked in a truck stop or gas station for minimum wage if that. How many have ever baited a hook, had a paper route, or had to decide between a warm coat with winter coming on or paying the cable?

This is why Trump took them by such surprise. They were dealing with a country they had never seen. And didn’t like. Lord only knows what kind of President Trump will make (unless God also is wondering, which I find plausible) but he had the country figured out. Which is positively weird, given that he is a filthy rich New Yorker.

And the media. These too did great work for our new President. All the corporate outlets were furiously against him, apparently assuming that their opprobrium would crush the upstart. Were they not CBS and NBC and theWashington Post, respected news outlets that people would believe and trust?

And so the talking heads chuckled and sneered and utterly underestimated and got handed their ass. They should have registered as lobbyists for the Donald.

The newsies did not understand that they were widely hated. Their obvious slant, often approaching verticality, looked like (and was) hostility to anyone who was willing to consider Trump. The common sentiment in Flyover Land became, “If these bastards don’t like Donald, he must be OK.”

They made him President.

It reminds me of when Bob Brown started Soldier of Fortune magazine, purporting to be a rag for, oh horror, squeak, mercenary soldiers. The media fell into convulsions denouncing him, cough, splutter, how could…. And with every denunciation, circulation went up. Ol’ Bob, he just smiles.

But the talking heads couldn’t figure it out. Did they not all agree with each other? Did not all of America hate what they hated?

So when he slapped down Megyn Kelly of Fox News, the talking heads exploded with delighted horror. Trump had just screwed himself with women, who would vote en bloc for Hillary. Whatever minute chance he might have had was now dead. Chortle, chortle.

Why? An obvious hypothesis is that women think for themselves, and did. Perhaps they thought Megyn, an abrasive plastic Barbie who probably gets more daily maintenance than a 747, was…an abrasive Barbie….

Trump could say to them, to Hillary, the media, the Insular Good, to BLM and the Snowflakes, “Thank you, thank you. I couldn’t have done it without you.”
Posted by arclein at 12:00 AM