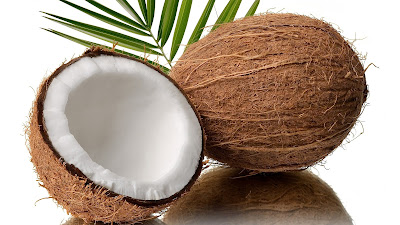 This aspect of the coconut is unexpected and needs more work. It is also clear that a lot of work needs to be done with this plant in order to fully make use of it.  Traditional methods have made a good start but it is way more promising..

Other work suggests that the coconut was globally distributed during the Bronze Age.  This item assumes a much later distribution which is simply wrong.  Pizarro met a sea going raft outweighing his ship and packing a load of coconuts.

In fact it appears natural sea distribution happened first.  This was then likely followed during the Bronze age with deliberate plantings of a preferred coconut on those same islands that facilitated natural distribution.  All that nicely confused later redistribution and attempts to then make sense out of it all..
.
Coconut: The Earth’s Most Widespread Medicinal Fruit Plant


Besides hemp, there are few if any plants that produce as much food, shelter, and medicine as the coconut palm.

A scientific review on the coconut palm (Cocos nucifera), which is referred to as “the most naturally widespread fruit plant on Earth”, reveals numerous beneficial biological effects of its various constituents, which include the husk, root, oil, water, and flesh. The study, titled “Cocos nucifera (L.) (Arecaceae): A phytochemical and pharmacological review,” also reviewed the toxicity literature on the coconut palm’s various constituents and found there was no evidence of acute toxicity, and only low toxicity associated with chronic exposure.

The study summarized the story of the coconut palm’s fascinating spread around the world as follows: “The plant is originally from Southeast Asia (Malaysia, Indonesia, and the Philippines) and the islands between the Indian and Pacific Oceans. From that region, the fruit of the coconut palm is believed to have been brought to India and then to East Africa. After the discovery of the Cape of Good Hope, this plant was introduced into West Africa and, from there, dispersed to the American continent and to other tropical regions of the globe.”


The review also summarized the traditional healing applications of the coconut palm. This is an important complementary data set, because though many of the traditional uses have not yet been tested and validated by science, they may actually work exceptionally well for these conditions in actual practice.

Below is a table showing many of these traditional uses: 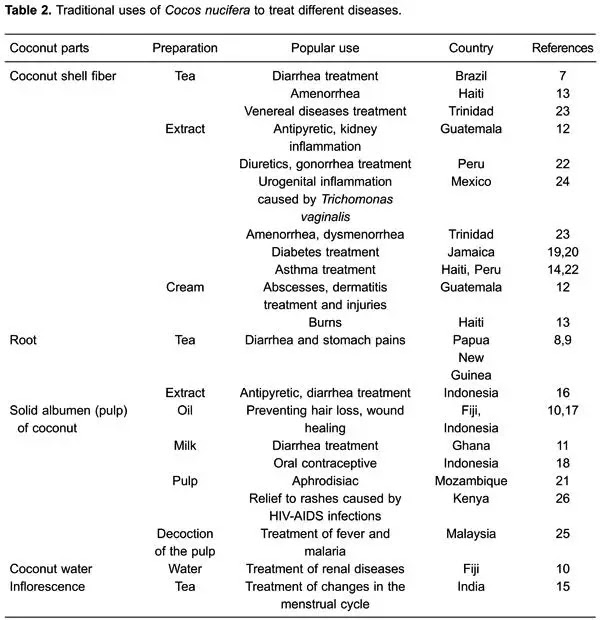 The traditional uses were also summarized in the following paragraph:

“In Brazil, extract from the husk fiber of C. nucifera is used to treat diarrhea (7). In Papua New Guinea, the leaves and roots of young plants are chewed as treatment for diarrhea and stomachaches (8,9). In Fiji, coconut oil is used to prevent hair loss and coconut water is used to treat renal disease (10). In Ghana, people use coconut milk to treat diarrhea (11). In Guatemala, the husk fiber extract is used as an antipyretic, to reduce renal inflammation, and as a topic ointment for dermatitis, abscesses, and injuries (12). In Haiti, a decoction of the dry pericarp is used for oral treatment of amenorrhea, and the oil is applied as an ointment to burns (13); an aqueous extract from the husk fiber is also used for oral asthma treatment (14). In India, infusions made with the coconut inflorescence are used for the oral treatment of menstrual cycle disorders (15). In Indonesia, the oil is used as a wound ointment, the coconut milk is used as an oral contraceptive, and fever and diarrhea are treated with the root extract (16–18). In Jamaica, the husk fiber extract is used to treat diabetes (19,20). In Mozambique, the fruit is consumed by men as an aphrodisiac (21). Peruvians use the aqueous extract of the fresh coconut fiber orally for asthma, as a diuretic, and for gonorrhea (22). In Trinidad, bark extract is used orally for amenorrhea and dysmenorrhea, and bark tea is used to treat venereal diseases (23). In Mexico, coconut is used to treat various disorders associated with urogenital tract infection by Trichomonas vaginalis (24). A decoction of the white flesh of the fruit is used in rural Malaysia to treat fever and malaria (25). In Kenya, the fruit is used to relieve skin rash caused by HIV infection (26).”

“Cocos nucifera is a widely dispersed plant that has important pharmacological effects with low toxicity. Furthermore, medicinal use of C. nucifera has an environmental appeal, since this plant is widely used in the food industry and use of discarded plant parts will reduce waste and pollution. The pharmacological effects of the plant differ according to the part of the plant or fruit used. Antioxidant activity predominated in the constituents of the endocarp and coconut water. In addition, the fiber showed antibacterial, antiparasitic, and anti-inflammatory activities. Only the ethanolic extract of the root had depressant and anticonvulsant action on the central nervous system. Coconut water seems to have protective effects, e.g., on the kidney and heart, and antioxidant activity, as well as a hypoglycemic effect.”

Please note: The GreenMedInfo.com database presently contains research on the coconut palm’s potential therapeutic value in preventing and/or treating over 50 different conditions, and expressing 16 different beneficial biological effects. You can view the supporting studies on GreenMedInfo’s coconut research page.
Posted by arclein at 12:00 AM